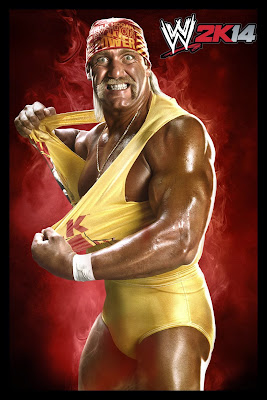 Have you ever wanted to see Cody Rhodes wrestle Andre the Giant? Are you disappointed that Big Show and Mark Henry never got around to teaming up and taking the tag team titles from The Shield? Have you regretted Hulk Hogan's loss to The Ultimate Warrior at WrestleMania VI for the last twenty-three years? Wish you'd seen Shawn Michaels versus The Rock happen?Think the main event of this year’s Hell in a Cell should've been Titus O'Neil versus Tensai inside the cage?


If you answered yes to any of those questions then WWE 2K14 is probably something that will interest you. Even if you're not into video games you'll almost certainly be aware of its existence. It's been mentioned prominently on RAW for the last month or so and was the sponsor of the Hell in a Cell pay-per-view. In a neat touch the game was integrated into background graphics for the show's matches. But that's by the by.


For me WWE games peaked with No Mercy on the N64. That was released in 2000, which either means I'm quite the fan of the game or that wrestling games have not had a good time of it over the last decade (or, of course, both). What I liked about the game was its chunky graphical approach (well-suited to depicting a group of people who you’d be astute to describe as beefcakes) and the grapple system. The latter saw you press a button to lock up with your opponent (y’know, like wrestlers actually do) and then select a move by pressing one of two buttons and-or a direction. It was so good because it allowed you to replicate the feel of a wrestling match.


Wrestling games since have failed to master these areas, which has led to my disenchantment with pretty much every game post-No Mercy. Some tried the awful approach of using button combos instead of simple grapples, which is completely counterintuitive to how wrestling works. Those that did stick with the grapple system usually botched it. Meanwhile attempts to create realistic character models were completely understandable but the technology wasn't there to allow for success. The chunky, cartoonish beefcake route was, until the last few years, the better one.


But with WWE 2K14 2K Sports have finally produced a worthy successor to No Mercy. Wrestler likenesses are superbly recreated on-screen, complete with signature taunts, mannerisms and egotistical arena entrances. Wrestlers respond in a realistic fashion and feel as though they have some weight to them. It’s the most well-thought-out experience since No Mercy.


Well, sort of. The system is actually just a polished version of last year’s WWE ’13. This year’s instalment was being created using all the same systems by THQ, who went bankrupt during the spring and summer. 2K Sports swooped in, nabbed the lucrative WWE license, and finished the game off. We’ll have to wait until next year to see a game that features a wholly 2K creative direction.


The create-a-wrestler options are, frankly, staggering. Anyone familiar with the previous game will be aware at how creative people with too much time on their hands are able to create rosters that boast characters as diverse as George W Bush, Ash Ketchum, and The Gobbledygooker. Hours of fun can be had with this feature alone, whether the goal is to fill in the handful of gaps on the roster (recent call-ups, NXT regulars, and wrestlers from bygone generations that couldn't be worked into the game), recreate themselves, or make a powerhouse Donkey Kong to job out John Cena with. The option to download various pictures and bits of artwork from the internet will be taken for granted by most people but it still amazes me. I'm used to being confined to The Rock's $500 shirts on No Mercy.


The main part of the game is its Thirty Years of WrestleMania mode. You’re presented with famous ‘Mania matches and tasked with playing through them to recreate key moments. It was a smart choice with the thirtieth edition of the show rolling around next year. The same thing was done with last year’s instalment of the game but with moments from the Attitude Era.


Your personal preferences for WWE eras will dictate what you think of the ‘Mania approach. People who believe that the Attitude Era is the be all and end all of WWE (and wrestling in general) will probably be nonplussed at playing through scenarios involving Big John Studd and King Kong Bundy. Those who can see passed the late nineties will probably be relieved that there’s less emphasis on Dude Love, Ken Shamrock and the Kane v Undertaker feud. Personally I’m a big fan of the Attitude Era but the focus on WrestleMania allows for a greater appreciation of the company’s lengthy history.


You’re rewarded for playing through these scenarios with new characters and arenas. Regain the WWF championship from ‘The Nature Boy’ Ric Flair at WrestleMania VIII as ‘Macho Man’ Randy Savage and you’ll unlock both. Scoop slam Andre the Giant as ‘The Hulkster’ and you’ll finally get to see that Rhodes v Andre dream match. It’s a simple formula but it works well, and should ensure even the most gifted gamers are kept busy for a week or so. It ties in nicely to the usual approach of making legendary names unlockable characters.


WWE 2K14 doesn’t do anything to completely revolutionise wrestling video games. But it does offer competition to previous kingpin No Mercy. In my book that makes it a tremendous success.
Posted by Dave at 20:03