The Future of ROH

At the start of the year I was positive, hopeful even, about Ring of Honor's future. Jim Cornette had been shown the door, Kevin Steen was the world champion, and the company was coming off of a very good Final Battle show. Cornette being gone meant Delirious would be free to pursue his own creative vision, one that I was interested in seeing. Steen being the champion was good because in the past ROH had had trouble manoeuvring the title onto guys when they were at their hottest. They'd managed it with Steen and fans hadn't turned on him, another norm. Things looked promising for the league.


For the first half of the year I was impressed with what I saw. Technical issues aside the promotion's iPPV output from the Eleventh Anniversary to Border Wars was excellent. It was almost certainly the best string of major shows that ROH had mustered in years. The match quality was dependable at every level of the card, there was logical show to show development, and an interesting (if utterly unoriginal) central plot (Aces and Eights... sorry, I mean SCUM!).


That hot streak ended, ironically enough, at Best in the World. The main event didn't help. Mark Briscoe versus Jay Briscoe has never struck me (and likely never will) as a worthwhile big show main event. It's a B show-slash-Friday night show-slash-DVD taping-slash-TV taping level central attraction at best. Yet it was the match that went on last at BITW.


That Jay had won the championship had disappointed me. Steen had a good few months left in his reign and it felt like his natural successor was Michael Elgin (although current champion Adam Cole would have worked well as the man to replace him too). Not only did 'Mr Wrestling's' reign reach a premature end but it came at the hands of a man I didn't feel was a logical choice for the role.


The post-Best in the World TV tapings saw Jay and Mark written off TV, with the championship being declared vacant a week or two later. I've written about the title vacation to a fairly great extent. Basically it shouldn't have happened. Jay should have been dropped the title at the June 23rd TV taping or agreed to come back to lose it in a one off appearance (sometime in July, realistically). The title's lineage is meant to be an important part of Ring of Honor and should have been protected. The company and Jay Briscoe should know that.


The title tournament that followed was a blown opportunity. Instead of making it something to attract new viewers, introduce new regular talent, experiment with a new creative direction or promote genuine dream matches it was a rushed affair that didn't achieve half of what it could have. The eventual victor, Adam Cole, was a good choice to become champion nineteen. His reign and the tag work of reDRagon, The American Wolves, and the Forever Hooligans are some of the sparse highlights of the promotion. 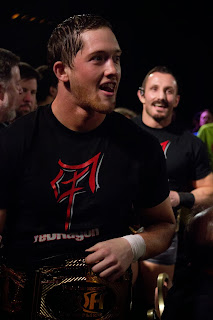 Highlights of Ring of Honor
The first half of 2013 saw ACH, Silas Young, Adam Page, and Tadarius Thomas become regulars. The second half of the year has no such names to boast. Without new names appearing and established names moving on the development of younger guys and new stars grinds to halt. That's always been the case for ROH and it's beginning to happen here.


As things stand at the moment there's little about Ring of Honor I find appealing. I’m not as uninterested as I am in TNA (ROH would have a long way to go before they sunk to those levels), nor do I think the company's in the bad shape it was this time last year, but I do feel it's become stagnant.


The lead plot of ‘The Panama City Playboy’ going bad and feuding with Jay Briscoe and-or Michael Elgin is fine, but alone it's not enough to hold interest in ROH. Cole is a fine champion and an enjoyable antagonist while 'Unbreakable' is a very good powerhouse babyface but neither man has the charisma of Kevin Steen. As long as he's around he's always going to be one of the promotion's biggest stars and needs to be treated as such. I appreciate his current work opposite Michael Bennett is designed to elevate Bennett (and protect Steen from overexposure) but it can only go on for so long before he loses steam and the amount of good he can do decreases.


I want ROH to succeed. I've liked what the company has stood for in the past and believe it presents a better alternative to WWE's approach than does TNA. But if the people running the company want it to be as good as it can be changes are needed. They can probably muddle through to the end of the year with the current approach but they should really be working on having something solid for 2014. To get back onto the streak they had early this year they need focus on crafting a riveting new lead storyline supported by engaging secondary ones and new talent. It's a challenge I feel Delirious and the roster are more than capable of meeting.
Posted by Dave at 23:41