Mid-Card: The Next Generation

When writing about the last few WWE pay-per-views I've said the company needs to work harder on the booking of its filler material. Generally speaking the big feuds, such as CM Punk versus Paul Heyman and Bryan versus Orton and The Authority, provide people with enough reasons to tune into shows. I don't enjoy every aspect of either programme but as main event rivalries go they are mostly doing what they're meant to.


But what WWE seems to be overlooking is that people aren't as willing to pay for shows just to see one or two matches out of eight as they used to be. There are so many ways for people to fritter away disposable income and time that big shows need to have a lot to offer in order to be of interest to people who aren’t obsessed with watching every WWE show. Even here in Britain, where we get some PPVs for free on Sky Sports, WWE has to offer more than just a handful of enticing matches because people simply don’t have the time to sit through subpar shows. They can just watch the key moments on a recording.


Creating a worthwhile undercard is not beyond WWE. They have demonstrated many times in the past that they know how to put together a cracking card and they currently have the talent to do it. They just don't seem too bothered about putting the work in. All of the writing team's effort is focused on the top of the card and so mid-card disputes are tossed together at the last minute. It's not unusual for a pay-per-view to feature previously unannounced alleged "bonus" matches, basically WWE’s way of skirting around bothering to create a reason for the combatants to meet. 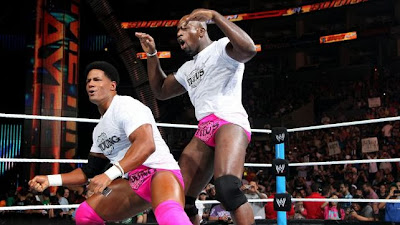 These guys are two of the many WWE could be doing more with
The answer, fairly obviously, is to dedicate more TV time to feuds between guys outside of the main event. They've got plenty of time to do it, what with a three hour RAW and a SmackDown best thought of as supplementary to the Monday show. And while the exactitudes of the writing team are kept secret I don't think it's unreasonable to assume that there are probably enough guys involved to have two or three dedicated to working exclusively on the middle and lower portions of the card.


It would be a nice place to start new additions to the team: they could get a feel for the process without being involved in something the promotion relies on to draw viewers. In an ideal world each writer would specialise in writing for a group of wrestlers, getting to know their strengths and weaknesses and overseeing their plots as they travel up and down the card. But in reality this will never happen in WWE.


Survivor Series being WWE's next show could help WWE reenergise its mid-card. Over the course of the next few weeks a handful of guys could be selected to enter into programmes with one another with the aim being to have a traditional ten man elimination tag match at the big show. Not only would this, if prepped correctly, add a match to the card that people may care about but it would get guys onto a show they may otherwise miss, providing them a chance to do something memorable. And it would give us a break from the forgettable filler matches that have been clogging up cards and are the problem to begin with.


WWE is not likely to get its next batch of top stars without a worthwhile mid-card scene. Nor are they going to see the amount of people watching their pay-per-views improve without a greater number of substantial matches being offered. Sooner or later they're going to have to change their approach.
Posted by Dave at 22:10