The October 28th RAW will always be remembered as the night the second failed Money in the Bank cash-in occurred. There are worse fates for a RAW to have.


The evening kicked off with a John Cena promo. He'd won a world title the previous night so what else could we realistically expect? The champ talked about being inspired by JBL openly doubting him in the weeks leading up to Hell in a Cell, mentioned that he'd be wrestling on SmackDown and the European tour (which struck me as pretty strange), and said that WWE is his life. I bet Nikki Bella was thrilled to hear that. In short it was the predictable and unremarkable opening segment that everyone expected and so lulled viewers into believing they knew how things were going to play out.


As Cena’s music played and ‘The Champ’ made to leave the ring it became clear the regular approach wasn’t in use. Damien Sandow walked down to the ring, custom suede case in hand, and mocked Cena by stating "The uncrowned champ is here!" 'The Intellectual Saviour' questioned Cena's miraculous healing ability and teased cashing in his title shot before saying that he’d be waiting for another night. Seconds later he swerved us when he kicked Cena's knee and then slammed the case into the champion's bad arm multiple times. 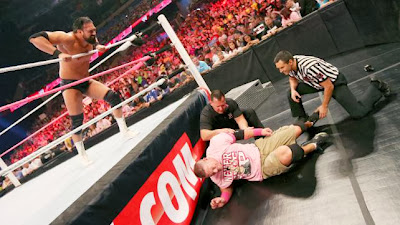 Things don't look good for Cena. Don't worry, he made it out okay
Leaving the ring Sandow stretched Cena's arm around the ring post and yelled "Rise above this!" as he whipped him into the crowd barricade. He completed his trilogy of Cena quotes for the evening by yelling "My time is now!" before he handed over his briefcase and Justin Roberts announced the cash-in to make it official.


It was a wonderful opening segment. A large part of the success was obviously due to the surprise of it all but Sandow's existing popularity and understanding of his character shouldn't be overlooked. His mockery of Cena's phrases helped make the moment what it was. And, in fairness, Cena played his part too. While showing weakness still isn't something he's great at he did sell the attack on the arm well and made it seem like Sandow's WHC reign had arrived.


As it turned out it hadn't. But you wouldn't have known that from the pre-match interaction of champion and challenger. The two men had a very good match, making it two nights in a row for 'The CeNation Leader'. Sandow looked competitive and it came as a shock when he lost, falling to Cena's trusty AA. 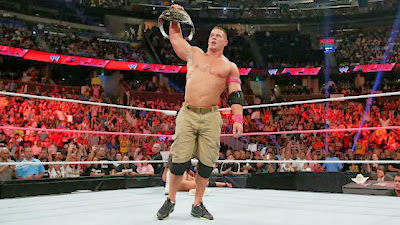 Yep. He's still the champ
I'm sure some people will see the loss as a burial and Sandow being "ruined". It's anything but. He was allowed to look like he was going to beat the biggest name of the past ten years. Even with the pre-match assault that's quite the achievement: not just anybody gets to look competitive against, or dominate, Cena. That he lost isn't an issue either. It doesn't mean he'll never be a champion, it just means he's not one yet. Losing to Cena is not, in and of itself, a sign that a wrestler is being overlooked. In fact that he was given such a lengthy interaction with the company's top star in the opening spot of RAW (which can be regarded as the prime spot of WWE's hours of weekly television) is a great sign.


Survivor Series will probably see Cena defend the WHC in a rematch against Alberto Del Rio, which will keep him busy for the next month. Beyond that it’s hard to say but he’ll likely be wrestling an upper mid-card heel at the TLC pay-per-view in December. It’s entirely possible it’ll be Del Rio again. I can’t imagine Cena being the World champion once WrestleMania Season kicks off in January so it’s possible the idea is for him to spend a couple of months working with Del Rio to keep him doing something (that seems) relevant (but actually isn’t).


The future of Sandow is less clear. Keeping him floating around the Cena versus Del Rio programme isn’t impossible but it would seem peculiar. The unsuccessful Money in the Bank cash-in demonstrates that Sandow is not on the level of either man: he’d be the clear odd one out in a triple threat match.


The interaction with Cena and the loss clearly happened with a plan in mind though. WWE doesn’t book opening segments of RAW (especially ones featuring Cena) without a plan in mind. Sandow lost for a reason. It may be the rumoured face turn. Losing what most fans consider a sure thing is a humiliating experience, one which could be used as the trigger to start eliciting sympathy. Even though Sandow’s a bad guy and essentially got his just desserts when he failed to win the gold it’s the sort of scenario the modern WWE brain trust regularly engineer for face turn purposes.


What I’d like to happen is Sandow mocked by his fellow superstars for picking the worst moment to cash-in, showing that he’s not the intellectual he claims to be. That could lead to a short series between Sandow and pretty much any mid-card face, which ‘The Duke of Decency’ would win. With that out of the way he could announce his intention to bring an end to Cena’s title reign by earning a shot at the World Heavyweight championship the traditional way. This chain of events could actually see Sandow wrestle Cena at TLC, because he’d have had a break while things were wrapped up between Cena and Del Rio.


Whether Sandow would win the WHC on the second attempt is irrelevant at this point. He would be rehabilitated by a PPV win over a contemporary and be driven by his high profile loss to Cena. The negative of losing would be turned into a storyline and a tool for moving Sandow to then top. It’s a far better idea than turning someone who uses the term “unwashed masses” into a babyface.
Posted by Dave at 09:05