One of a Kind

At Payback we learnt that Rob Van Dam has signed a new WWE contract. The news went down very well with the Chicago crowd. They spent the rest of the evening bursting into chants for RVD. The same three letters trended on Twitter during the show. Clearly his return is popular.


I suspect that a lot of people are going to be expecting a lot from 'Mr Monday Night'. For starters he's signed a short term, limited appearances deal. That means that people attending house shows (or is that live events?) are most of the time going to be left disappointed if they're hoping to spy RVD. I suspect he’s going to be used mostly on TV and pay-per-view.


Even placing availability issues aside there's the fact that Van Dam is, shall we say, not as spritely a performer as he used to be. Anyone who saw him in TNA, particularly towards the end of his run earlier in the year, would be able to tell you that he is not as slick as he once was.


Don't worry, he still does all your favourite signature RVD spots: the split legged moonsault, the Van Daminator, the tumbling senton and all the rest. But his matches have become formulaic. They've always been known for being heavy on high spots but the transitioning used to be close to seamless. Now Rob shuffles from one spot to the next with a tedious selection of scoop slams and punches to get his opponents into the desired position. His decreased speed and intensity, and increased portliness, mean that his frog splash no longer merits a five star rating.


Perhaps I'm being pessimistic. After all, there's nothing to stop Van Dam getting back into shape for this WWE return. He's long been known as a man who performs better when he feels valued. He was in good condition towards the start of his time in TNA, which is when he was being presented as a major star by the league. A correlation can be drawn between his drop down the card and the extent to which he phoned his performances in. Maybe a return to The Big Time will motivate Van Dam to get back to top form.


RVD sparkles when he’s on top form. Numerous examples of his wrestling prowess can be plucked from his twenty year career. An obvious thing to mention is his ECW programme with Jerry Lynn, which gave the company some of its best matches in its final years. In addition to carrying dozens of lesser performances to enjoyable matches he’s also worked classics against the likes of 'Stone Cold' Steve Austin, Kurt Angle, Jeff Hardy, Lance Storm, Rhino, and the Undertaker.


A cynic might point out that those guys rarely had bad matches with anyone. And they'd be right. But as I say, Van Dam has carried so many lesser opponents to quality matches that he’s proven he can be relied upon. 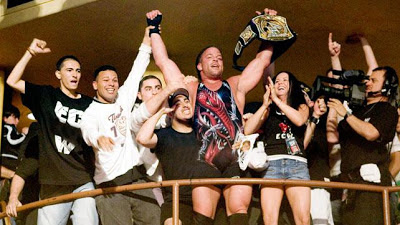 Happier times for 'Mr Monday Night'. Don't expect to see this sight again
The other side of Van Dam shouldn't be forgotten though. The sloppy worker side. RVD famously unleashed a slate of concussions on the WWE roster when he debuted the Van Daminator in the promotion. While some of the blame could fall to the men receiving the move it's hard not to see it as evidence of clumsiness.


There are other examples. Hardcore Holly getting sliced up in a poorly executed table spot in 2006 for instance. With the WWE approach to handling concussions having changed (for the better) since RVD was last in town he'll need to work a less reckless style if he's going to achieve success.


The return of 'The Whole F'n Show' to WWE presents a number of fresh matches, feuds and storylines. His status as a Paul Heyman guy is well documented, for example. It's unlikely but that could lead to an on-screen pairing for the two. If Rob ever goes heel I'd like to see that. Don’t expect it any time soon though.


Match-wise Van Dam has "dream" opponents waiting for him in CM Punk and Daniel Bryan. He has fresh pairings with Brock Lesnar, Wade Barrett, Cody Rhodes, Damien Sandow, Alberto Del Rio, and of course Ryback to look forward too. It's been said that WWE already has a first feud in place for Van Dam. Realistically that could be with anybody but Randy Orton, Curtis Axel and 'Big Hungry' would be good choices.


The much ballyhooed Orton heel turn (hey, it’s going to happen any time now, everyone says so!) would make ‘The Viper’ a great opponent for RVD. They’ve interacted surprisingly little despite coexisting on the roster for much of the last decade. I think they’d have good matches. Ryback could be an intriguing programme too. RVD could comfortably lose a bout against ‘The Human Wrecking Ball’ at SummerSlam without his status being harmed. There’s even a readymade storyline waiting: Ryback’s been nicking Van Dam’s wrestling gear!


Perhaps the best rivalry for RVD to launch into would be with Curtis Axel. There’s a natural starting point with Heyman trying to recruit Van Dam and being rebuffed. Being associated with Van Dam would enhance Axel’s standing on the roster, as would gaining a win over him. Even a tainted one. It would be a sensible piece of television.


Don't expect RVD to come back and win a Money in the Bank briefcase. While it's not impossible he'll once again win the 'Mr Money in the Bank' moniker I don't think it's likely. That's an accolade for a rising star heading to their first world championship. Van Dam, as an established and popular name, doesn't need that shortcut.


RVD's return strikes me as something designed to spice up the mid-card. We could see him clashing with the big names for a world championship but I think it's likelier he'll be playing a supporting role. At this stage of his career there's no finer use for him.
Posted by Dave at 20:47