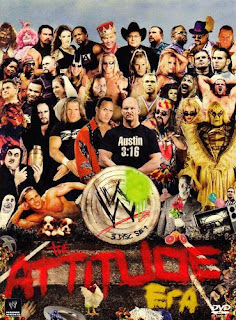 You'd have thought that a DVD focusing on WWE's Attitude Era would pretty much put itself together. The company has access to a large number of the biggest stars of the time, as well as those employed by WCW, the chief opposition during the boom period. There are more than enough great moments to choose from to highlight the strengths of the time, not to mention plenty of feuds, performers, angles and events to focus on.

Despite this WWE's Attitude Era DVD (released to eyebrow-raisingly little fanfare last year) doesn't do a particularly good job. For starters the main feature is only an hour long. This is a perfectly reasonable run time and allows WWE to cover the majority (but not all) of the most important stuff to a satisfying degree. Unfortunately it's not long enough to cover everything that should have been covered in sufficient detail. Some things you'd expect to be covered heavily are glossed over or omitted altogether. Bizarrely some things you'd think wouldn't get much of a mention are granted a hefty portion of the run time.

Chris Jericho's debut is a good example. While the his first appearance on RAW is included in full as an extra it's not really tackled on the main documentary. The same goes for Kurt Angle. Both men were important signings during the era and could be considered stars by the time it ended. They remain stars today, which makes them relevant to the documentary. That their involvement is downplayed feels odd.

Perhaps I'm reading too much into it. After all neither Austin nor Rock, undeniably the Attitude Era's biggest hitters, get much of a profile either. The only act to get what would anyone would consider a lengthy amount of time dedicated to it is D-Generation X. The approach is at least consistent but for the most part it could leave someone unfamiliar with the product confused as to who placed where on the pecking order.

The selection of talking heads feels limited compared to other WWE releases. Some of the contributors are strange choices. I can't imagine anyone was desperate to hear so much from Rikishi, who crops up time and again to give his opinon on practically every subject covered. His involvement should've ended after he took credit for inventing the Too Cool gimmick (a lie by the way: Taylor and Christopher were repackaged as a hip hop act months before they were united with Rikishi and their deliberately bad dancing was a part of the fun and games from the off). Ron Simmons gets a surprising amount of face time.

Better value are Road Dogg and, amazingly, Mark Henry. Roadie offers a great deal of insight, his sense of humour helping him to come across well. Henry is self-depreciating, useful when the Attitude Era provided fans with so many amusing moments at his expense. He seems genuinely touched when talking about a fan who told him they'd appreciated his work during an angle that saw him dating a transvestite. ‘The World’s Strongest Man’ comes across well.

The feature starts focusing on DX before moving on to Austin (hilariously described by the gruff and intimidating narrator as "a monsoon of good fortune") and the importance of long term stories to the era's success. Anyone who watched WWF programming at the time will be able to tell you the McMahon's appeared a lot as part of those long term stories. According to Pat Patterson that was something everyone wanted to see. Lies like that are what keep Pat employed.

They cover the Brawl for All and wisely don't try to disguise what a failure it was. JBL admits it was a stupid idea. He also reveals that it came about from an idea he submitted to management that was, it turns out, more in line with what the hardcore division became. This wasn't something JBL just decided to do, the entire roster was encouraged to submit ideas regarding what they'd like to be doing on TV. WWE should consider doing something similar with their current batch of stars.

Talk of the hardcore division naturally leads to clips of all the famous bumps and dives of Mick “I’m a hardcore legend” Foley. He's acknowledged as a great hardcore wrestler but it feels half-hearted, as though the people saying it haven't stopped to think about what the term hardcore in relation to wrestling means anymore. There's something off about Foley's spot on the DVD in general. It's as though he's being mentioned grudgingly. Perhaps he is.

Speaking of Foley he crops up as a talking head, usually contributing something either instantly forgettable or giving an example of WWF programming he didn't care for. Most of the things he finds distasteful involved the portrayal of women, although stuff involving DX and 'Sexual Chocolate' upset him too.

Road Dogg and Mark Henry happily reminisce about the more provocative clothing WWE's female talents wore back then. They also mention girls taking their tops off in the audience. I mention this mainly because Henry is hilarious on the subject. Other amusing comments are Big Show describing everyone before Sunny as looking rough and Stephanie McMahon popping up to say the girls of the Attitude Era were "sexy, fun and manipulative". It makes you wonder what sort of values she’s instilling in her daughters.

We're told that when SmackDown debuted the WWF deliberately sought a more comedic tone. It's not made clear why. In fact it wasn't clear that it was actually happening when I was watching SmackDown during the period in question.

Still, it does at least provide an excuse to play the footage of Mae Young giving birth to a hand which leads to Mark Henry announcing he wasn't completely sold on the reveal. When he asked Vince McMahon why a hand had been chosen the reply was "It's a hand!" That story is worth the price of the DVD by itself.

The documentary wraps up by blasting through some clips of 'Y2J' and Angle, devoting a surprising amount of time to Patterson, Brisco and the Mean Street Posse, and the 24/7 era of the hardcore division. I hated that gimmick at the time. I'm still not wild about it now.

Over on the extras disc things are pretty good. You get a hefty selection of matches and angles to browse through. Some merit inclusion more than others. I can't imagine anyone was desperate to see Bart Gunn legitimately KO 'Doctor Death' Steve Williams and the highlight of the Sable v Marc Mero encounter is the commentary of Jerry Lawler and Jim Ross.

Better is a four team tag title match featuring Austin, Rock, Undertaker, Mankind, Kane, and the New Age Outlaws (along with odd man out D'Lo Brown). It's not a bad effort but it's most interesting for involving so many of the major players of the time in one outing. Rock versus Mankind from Survivor Series '98, the infamous beer bath segment, and Chris Jericho v Eddie Guerrero from April 3rd 2000 are all worth looking at again too. All the extras, good and bad, are pretty solid representations of what made the Attitude Era what it was.

Despite the assorted failures with the main feature they do manage to give viewers a taste of nostalgia for a fondly remembered wrestling era. It's also pleasing to hear acknowledgement that Attitude didn't come about purely by design: it was able to happen because the WWF was smart enough to capitalise on viewing trends with American audiences. Various contributors also admit that the Attitude Era saw numerous guys all hit their stride at the same time. It's true and it was the biggest contributing factor to the WWF's success.

The Attitude Era is far from the worst wrestling DVD out there but it does feel like something of a missed opportunity. The period from late '97 to early '01 is critically acclaimed and loved for a reason. It's also the reason WWE is still in business today. It deserved more than an hour but makes good use of what it’s given.
Posted by Dave at 16:51