When The Ryback attacked John Cena on the April 8th RAW I said a feud between the two could work but that Ryback shouldn't become a bad guy for it. My feeling was that the best approach would be to book the two men as faces who dislike one another as opposed to taking to tried and tested face versus heel route, allowing the fans to choose who to root for. Needless to say that’s not what’s happened. Two weeks later and he he's turned heel.


Since going bad 'Big Hungry' has been given a ludicrous amount of promo time. Newly turned acts getting time to talk isn't a problem if they can cut an effective promo that covers their points. Unfortunately Ryback can't. His pre-recorded effort on the April 15th RAW was very good but he's not managed to keep up the good work when he's been in the ring. He’s also not a wrestler who benefits from talking much. Hulking silence is more his bag.

Adding a manager to speak for him would help. There aren't any obvious options for the role though, and it would seem peculiar for 'The Human Wrecking Ball' to take on a spokesman out of nowhere. He's never been the chattiest cat in town but he's never shied away from microphones, why would he start now?

The biggest problem with the turn is that it's poorly timed. People still want to cheer The Ryback. He was getting over as a good guy, something WWE is in desperate need of, and was turned simply to create a convenient challenger to Cena's WWE championship. It’s a short sighted move made simply because WWE have done such a woeful job of elevating talent who can credibly oppose their top star. 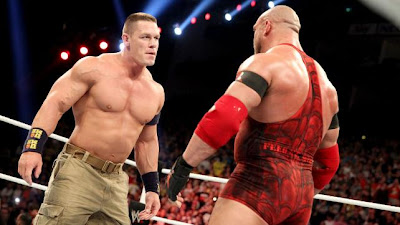 
This is particularly annoying when you consider that Cena’s title win was planned months in advance. Rock was always going to defeat Punk and drop the gold to ‘The Franchise’. Knowing that WWE should have made it a priority to spend WrestleMania Season prepping some new challengers.

Of course another problem is that Ryback has turned heel on the most unpopular lead babyface ever to grace a wrestling ring. WWE fans are so split on Cena as a performer, because he's been on top for so long, that it's going to take someone special to encourage them to rally behind the champ. That Ryback is so different from Cena aids his appeal. No matter how many times he calls fans stupid there will always be some who cheer him because he represents an alternative.

As I mentioned above a face versus face programme would have worked better. Ryback could have attacked Cena to make himself stand out and launch himself into title contention (that’s how things have worked for a long time in WWE). He could have grunted a short explanation giving those reasons on the April 15th RAW, face-to-face with 'The Champ'. Cena could have said he respected the move (because Ryback didn't exactly sneak up on Cena in a heelish fashion) and agreed to a championship match at Extreme Rules.

Alternatively Ryback could have won a number one contenders bout on the April 22nd RAW. That could have been good as it would have seen him earning his shot like a babyface. Plus he could've done with a win over a credible opponent or two. I can understand not doing this though, what with WWE not having access to the full roster on RAW (half the crew were at a SmackDown house show).

The feud should have seen Ryback gaining wins over upper mid-card talent, the story being that he's refocused after his numerous high profile losses. Cena could have spent his time cutting promos and talking The Ryback up as a serious contender.

The heel turn has benefited nobody. Cena is in a feud just like all his others while Ryback is left playing a coward. It’s making the former powerhouse look weak too. Could Cena have scooped up a headline babyface for the AA as easily he did Ryback on RAW. Probs not.

It's a waste. The Ryback could have been huge. Extreme Rules could have been huge too, if WWE had simply left both men as they were and booked a face versus face bout. It would likely have created an air of uncertainty and provided a great atmosphere at the pay-per-view. Surely a match with a split audience who are uncertain as to who will in is preferable to an apathetic audience who are bored by yet another promising wrestler being sacrificed to the mighty Super Cena.
Posted by Dave at 20:01