Supercard of Honor VII saw the longest ROH title reign in four years come to end. A lot of the focus of the title change has been on Jay Briscoe being the man to hand Kevin Steen his first ROH loss in over two years. Which is understandable: very few people expected Jay to ever get a reign as the champion and the WrestleMania weekend show seemed like it would be a guaranteed retention for 'Mr Wrestling'.

What not many people (or at least not enough people) are focusing on is Steen's hard work. Even before he won the title he had been the focal point of Ring of Honor. Minus a six month break due to contract disputes and-or creative disagreements with Jim Cornette, Steen has been one of the most heavily featured and enjoyable singles acts since early 2010. He was there playing a supporting role during Davey Richards' damp squib of a title run and had the feud of the year against former teammate El Generico in 2010.

Since Steen won the belt last spring he's been a rallying point for fans of the promotion, a beacon of positivity in a company that had sadly lost its way. He never entered anything less than a great performance when defending the belt (or wrestling in a non-title match come to that) and survived poor iPPV streams, slapdash booking and dwindling interest in the product he represented. His involvement in the promotion proved a saving grace. Without him there’s a very real chance 2012 could have seen Ring of Honor go under.

I was originally sceptical 'Wrestling's Worst Nightmare' could have a meaningful run as champion. His two matches against Davey Richards proved enjoyable but 'The Lone Wolf's' second loss meant that he could no longer challenge for the gold. That denied Steen a talented and popular opponent.

Further limiting the possibility of a great reign was the shallow ROH roster. During his first few months as champion he was subjected to defences against the likes of Mike Mondo, Eddie Kingston and Homicide, none of whom meant a great deal to fans and none of whom are known as the greatest wrestlers available for hire. His defences against Eddie Edwards and Roderick Strong were very good, but they were isolated affairs with no long term plan attached to them. In a sense they were teases of how good the Steen reign could be. 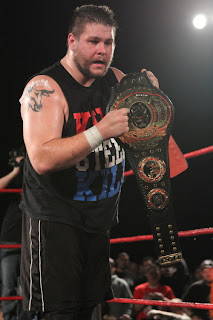 Shed a tear: this is a sight we may never see again


It wasn't until Jay Lethal challenged him in October that Steen had another title match that could be described as a classic. From there he entered spirited defences against Michael Elgin (at Glory by Honor XI) and El Generico (at Final Battle), had a great rematch with ‘Black Machismo’ (at the 11th Anniversary Show), and a surprisingly satisfying non-title four-way outing against Edwards, Strong and Elgin (at Defy or Deny II).
From the moment Delirious took over as booker in October Steen was given the chance to cement himself as one of the greatest ROH champions. He seized upon the opportunity and proved he belonged in the same league as the likes of Samoa Joe, Nigel McGuinness and Bryan Danielson. He did a far better job of overcoming the obstacles of his reign than Davey Richards did the year before.

Steen’s loss of the championship came as a surprise. There's every chance he'll get the belt back at some point but ultimately that's neither here nor there. Steen deserves appreciation for carrying the company for a year and making sure the belt retained its prestige while in his possession. For now I want to thank Kevin Steen for having the first reign we all needed him to have.
Posted by Dave at 20:40