Sometimes you get episodes of RAW that just don't do anything particularly memorable. This week's is a very good example of that.

The Nashville RAW featured three things of note. Two were the sort of thing WWE does on a weekly basis, namely produce vaguely palatable filler that is rendered inconsequential after the next pay-per-view. The third was a staggeringly risky new direction for a performer who has needed a change since last year.

Everything else on the show was either last minute booking for Elimination Chamber or a wrestling match. The wrestling on offer varied in quality. On the one hand we got a good Daniel Bryan v Chris Jericho outing. On the other we were subjected to Tensai and Brodus Clay handily downing Primo and Epico. Every match had something in common though: they will all be forgotten by next week. This is the result of WWE placing more emphasis on skits and stories over anything resembling sport. Matches now exist only to further feuds or otherwise contribute to plots.

This isn't anything new. It's been WWE's approach for years. It's just that some weeks it's more obvious than others.

The first enjoyable bit of fluff was Paul Heyman's attempted retirement. This opened the show and featured Heyman announcing that he would be leaving because he was a distraction and a hindrance to CM Punk. This brought out the former WWE champion to convince Heyman to stay. Nothing much else happened. It was very clearly a riff on the announcement that Pope Benedict XVI will be retiring shortly.

The reason I think this will be looked back on fondly by some is because of who it featured. Punk and Heyman each have hefty fan followings who look back over their old segments on YouTube. Their pairing has been sufficiently popular to make the faux retirement an item of interest. But while I think some people will watch because of who's involved I don't think anyone will ever list it as a classic segment or promo.

Punk and Heyman returned at the end of the programme after The Rock had given us what was probably its most enjoyable aspect. He cut a promo about moving to Nashville at fifteen and having his first match there at twenty-five. He referenced Jeff Jarrett (y'know, that guy Vince McMahon hates that works for TNA?) and his high school and told a story about buying a car from a crackhead.

This is the sort of thing Rock does very well. He tells a generic little story with humour as its driving force and peppers it with references to local celebrities, landmarks and history. The mentions get the locals on-side and encourage cheap pops, making them even more vocal than they would be otherwise. This translates well to people watching at home who can laugh along with the story even if they don't get all the references. It's not a trick The Rock used that much on his way to the top. It's one he's perfected since his return to the company in 2011. It works partly because of his charisma but it also keeps fans from turning on him. It's an important part of his repertoire.

While it was the best thing on the show it wasn't anything particularly memorable. It was basically designed to give the audience something to cheer and to get Punk and Rock in the same place for a brawl before EC. Those measly goals were accomplished. Rock did entertain and he and Punk did brawl. 'The Best in the World' ran off with the championship belt after levelling 'The Brahma Bull' with a GTS. Expect him to wear it to the ring at Sunday's PPV.

Finally we come to the third noteworthy part of the show. Even though it didn't feature The Rock, CM Punk, John Cena or any other one of WWE's flock of main eventers it is this portion of the show that I think will be looked back on most over the years, simply because it was so bizarre and unexpected.

Jack Swagger came to the ring for a match with Zack Ryder. He was accompanied by a man he introduced as Zeb Colter. Following the bout Colter grabbed a microphone and proceeded to cut a promo with some decidedly un-PG overtones. He stated he is a proud American. Fine. He stated Swagger is a proud American. Also fine. He stated he is a Vietnam veteran. Okay, we’re getting into murky territory here but that is, broadly speaking, fine. 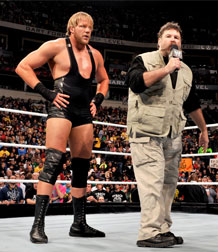 A black singlet? What happened to the red, white and blue? Not very patriotic...


Colter apparently doesn’t recognise America anymore. We were told that he sees people with faces that aren’t like his speaking languages he doesn’t understand. He wondered aloud where all of those people had come from before also wondering aloud how to get rid of them. He mentioned border patrols and some routinely jingoistic Americanisms before saying that America was their country and their land because they’re real patriots.


Yes, Jack Swagger has been repackaged as a racist. It was inevitable really.


This is such a spectacularly messed up situation it’s difficult to know exactly what to say. I mean obviously it’s a distasteful direction to take Swagger in. It’s also a change that’s almost certain to be heavily revised once the inevitable bad press hits. A PG rating and racism are not natural bedfellows.


And yet WWE have got the basic idea right. I pointed out a week or so ago that the weakest part of Swagger’s act is his inability to give a convincing speech. Giving him a manager is absolutely the right thing to do. Colter is a very good choice. He’s been known for most of his career as ‘Dirty’ Dutch Mantel and is noted as a good stick man. Until a few years ago he was a booker for TNA and he’s been instrumental in the careers of guys like the Undertaker and ‘Stone Cold’ Steve Austin (you may have heard of them). Take away the racism and it’s a fine decision.


This episode of RAW will always be an item of interest because of this short segment. The duo will be toned down sooner or later which will eventually result in people looking back to see just how full-on the stuff they said at the start was (because rumours will spread and fans who missed it first time around will look back on the time that “Jack Swagger was a massive racist”). They’ll be disappointed because, truth be told, nothing Colter said was overtly racist. It was more the tone and the fact that two such characters could appear in WWE in 2013 than anything else.


Still, let’s look on the bright side. At least it looks like the Swagger push is back on!
Posted by Dave at 20:30