Showing Up to Show Off

Anyone who’s read my Elimination Chamber preview may have noticed the absence of one name from it. Dolph Ziggler. While he doesn’t have a match announced for the show his status as ‘Mr Money in the Bank’ meant that his name could have cropped up in a preview of the show.


I opted not to mention him because there’s been no clear indication that he’s going to cash-in on the show and the preview felt long enough as it was. It felt like a subject for a fresh entry (this one). Also, I’m of the opinion that ‘The Show Off’ will take his title shot at WrestleMania XXIX. That feels like the right location for Ziggler’s first proper world title win.


That’s not to say that I think Ziggler will be absent from Elimination Chamber. Far from it. I fully expect Ziggler to make an appearance of some sort on the pay-per-view. He’s the most high profile TV regular without a scheduled appearance. That WWE would put on a card without him during the much vaunted Road to WrestleMania is unthinkable. It’s an ideal time of year to elevate talent, and with Ziggler top of the elevation list it would be monumentally backward to omit him from the show.


There is a chance I’m wrong and he will cash-in his Money in the Bank contract. If he does I’m sure it will be on Alberto Del Rio. Ziggler isn’t high enough on the pecking order to score a victory over Big Show. In fairness that would be a weird sight anyway: not only does ‘The Heel’ not have anything in his arsenal that could effectively put Show down for three but one heel beating another for a world title would be strange.


Perhaps you’re thinking that Big E could take out ‘The Giant’ to allow Ziggler a successful WHC win. That would look better but it wouldn’t help Ziggler. His World title win needs to come at his own hand. If he’s shown to need the help of someone else to obtain one of the biggest wins of his career it’s not going to do his already flimsy credibility much good, is it?


So if he uses his guaranteed title shot it will be against ADR. While I don’t think a Ziggler cash-in is likely I do like the air of unpredictability the possibility casts over the World Heavyweight title bout at WrestleMania. WWE’s biggest show of the year should never be completely predictable. There needs to be an air of mystery to the card throughout January, February and the first bit of March. If the big matches are revealed too early then there’s a chance we’ll be bored of them before they even happen.


That’s what’s so good about the World Heavyweight title scene at the moment. We don’t know who’s going to be involved and there are plenty of directions to take.


ADR could retain and go on to defend against Swagger at WrestleMania in a match that turns the old patriotic American hero routine on its head. Or he could clash with Randy Orton in a match that sees ‘The Viper’ return to the dark side by going to increasingly desperate lengths trying to wrest the belt from his opponent. He could go up against the reinvigorated and unstoppable monster that is Mark Henry, or enter into a (very surprising) programme with ‘Y2J’.


Or Big Show could shock us all by becoming a three time WHC. He could be the mountain that ‘The Apex Predator’ has to overcome to get back on top. One of his old rivals in Mark Henry or Daniel Bryan could surprise us with a Chamber win. We’ve seen Show work surprisingly good matches with both before, why not give him ten minutes with one of them to kick off WrestleMania with a bang?


Or Ziggler could cash-in at Elimination Chamber and wrestle a fantastic match with Daniel Bryan at WM29. It could turn out to be one of the best pure wrestling encounters in the event’s history. Perhaps he could leave EC as the new champion and go babyface before April 7th, defending against Jack ‘The Racist’ Swagger. Orton or Jericho could win to revive one of Ziggler’s programmes from the second half of last year. They both have victories over him which could be used to introduce doubt into the WM result.


There’s no way of knowing what WWE’s doing with the World title yet. With the top three matches pretty much certain (Rock v Cena, Undertaker v Punk, and Triple H v Brock Lesnar) it’s good to have something on the show that nobody’s sure about. 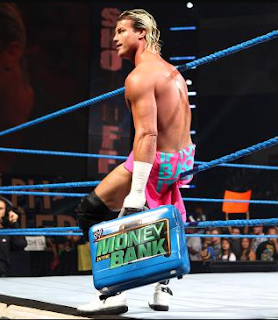 Who will this guy face at WrestleMania?
But like I said I’m still as sure as I can be that Ziggler won’t cash-in until ‘Mania. The likeliest thing for ‘The Heel’ to do at Elimination Chamber is to interfere in a match or appear in a brief in-ring segment to cut a promo. Doing either could be used to set him up with a match at WrestleMania. The likeliest guy for him to face would seem to be ‘Y2J’.


They interacted briefly after the Royal Rumble but their feud has since cooled a little. I originally thought they’d face off on the EC card but Jericho’s inclusion in the Chamber bout made it clear that wouldn’t happen. That there are unresolved issues between the two and WWE went out of their way not to have them face one another at Elimination Chamber could hint that they’re being held off for something bigger.


If it’s not Jericho then Orton or Sheamus could be candidates to face Ziggler. Neither man has anything clear to do on the big show and both could do something enjoyable against a guy like Ziggler. Either match could also boost the WHC scene for April onwards: Ziggler could lose his scheduled match at ‘Mania then cash-in later in the show and leave as the champ. That way whoever he lost to could make a legitimate argument about deserving a title shot.

Whether he cashes in or not I’m sure tomorrow’s show will feature Ziggler in some form. He’s too important to the future of the company, and his development is at such a critical point, for him to be left off the event. Just don’t expect to see him with gold around his waist.
Posted by Dave at 18:44