One on One with 'The Great One'

When The Rock and John Cena announced they would wrestle each other at WrestleMania XXVIII it was immediately clear that 'The Great One' had returned to WWE to put over the company's current top star. That clarity was obliterated the moment Rock beat Cena in that match.

The point still stands though. The Rock returned in 2011 to provide aid to the company that helped launch his career. His hosting duties at 'Mania XXVII were just the first step. In hindsight it had clearly been agreed by WM27 that he'd return to the ring.

The reason Rock will put over John Cena is that it will help the latter's credibility. You'd be forgiven for thinking that Cena doesn't need help in that area. He's over and popular despite not being able to perform any wrestling move or hold convincingly.

Being granted a victory over one of the biggest name wrestlers ever will, in the minds of WWE management, put him on the same level. It will also send a message to "smart fans" that Rock considers Cena worthy of the rub. Cena, being the biggest full time wrestler at WWE's disposal, is the natural choice to hand The Rock his first defeat in a decade. WWE basically want to get Cena as close to Rock-level stardom as possible so that in ten years’ time he's the one returning to put guys over. 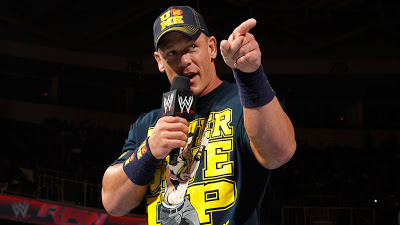 This is why Rock v Cena has to happen at WrestleMania XXIX as opposed to a three-way that adds CM Punk. As much as that addition would improve the quality of the bout the story needs to be that 'The CeNation Leader' earned his victory without help or distractions. He does it against everyone else, but everyone else isn't The Rock. The man from Hollywood is the only other man on the roster who legitimately casts Cena as the underdog.

The impact of the victory would be lessened considerably were Cena to pin Rock in a triple threat. It's a situation that demands a singles bout.

The announcement that Cena and Punk will clash on next week's RAW, with the winner facing The Rock, is concerning. It could simply be a way of spinning out the 'Mania build for another couple of weeks. Reigniting the old Cena and Punk feud for two episodes of RAW means that Rock v Cena only has to be hyped for four weeks rather than six. That's a desirable situation because all the good material for those two was used prepping last year's showdown.

The alternative is more worrying: a wacky finish of some sort to instigate the three-way match for 'Mania. This would only come about if Undertaker has announced he's unable to wrestle Punk on April 7th. I don't think that's the case. I think 'The Dead Man' will defend his Streak. Even if he doesn’t I'd rather Punk be given a fresh programme as opposed to being slotted into the WWE title feud.

If the last two years are to have been worth it this year's WrestleMania needs to end with Cena getting his win back and The Rock raising accepting him as an equal by raising his hand. Nothing else will do.
Posted by Dave at 20:03