Ain't Nobody Got Time for a Players Split

There's a rumour going around at the moment that the Prime Time Players are going to be split. The reason for this supposed split is that Vince McMahon (a.k.a. the boss) is a fan of Titus O'Neil and wants to use him as a singles act.

Nothing could harm Titus more than a split from Darren Young right now. WWE is awash with neglected, bodged, and poorly handled singles pushes. The last thing the company needs is another two low- to mid-card grapplers to fit onto TV shows. That both Christian and Mark Henry, men who have proven their worth in the last two years as singles wrestlers, are waiting to return to television tells you all you need to know about the abundance of singles acts at WWE's disposal.

Being in a team plays to Titus's strengths and disguises his weaknesses. As part of double act the amount of ring time he gets is halved while his ability as a witty talker allows is put to use by having him work as the mouthpiece of the team. Reallocating to the solo ranks would show him up as a limited performer and grant him no extra promo time. It would be a foolish move. 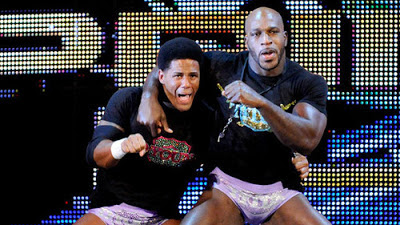 Ain't nobody wants to see a Prime Time Players split

There's also the fact that the PTPs are one of only two notable teams on the books right now, thanks to the premature split of the Rhodes Scholars. If O'Neil and Young are split that will leave Team Hell No as the company's only regular combo, and the appeal of their combo dwindled months ago.


And let’s forget that the two men have improved since being moved to SmackDown following the NXT restructure last spring. ‘The Big Deal’ has come the farthest, both in terms of ring work and promos, but Young has worked hard too. The pair have forged an identity for their team where the creative department haven’t bothered and introduced some enjoyable gimmicks and phrases to their repertoire. The whistle, the hair pick, and the “millions of dollars chant”, not to mention their new “Ain’t nobody got time for that” phrase are the products of their own hard work.

I hope this rumour turns out to be false. Sending Titus off on his own would be disastrous. If he's earned fans backstage then he should be rewarded with a push in his current role. He'll be of more use to the company as one half of a tag team for the foreseeable future, and there's nothing wrong with that.
Posted by Dave at 19:58