Over the spring and summer of 2011 R-Truth turned heel. He was a revelation in the role. Gone was the smiling, dancing mid-card babyface, replaced by an engaging and amusing paranoid schizophrenic convinced that being made to pander to children for years had cost him his shot at the big time. He revelled in peppering his promos with strange phrases and audience interaction and adopted a more aggressive ring style (as all WWE heels do). He became a programming highlight and did some of the best work of his career.


What happened to that guy?


WWE fumbled things. Anything they've not got a plan in place for that becomes popular gets fumbled. That's what happens when a wrestling company has no long term plans (or goals) and a creative department who don't understand the wrestling business to a satisfactory degree.


The specifics with Truth are particularly disappointing. He headlined June's Capitol Punishment in a WWE championship match with John Cena and then did absolutely nothing of note until the autumn, despite being one of wrestling's biggest bad guys at the time.


In retrospect he probably got overshadowed by the CM Punk worked shoot promo and ensuing mega push. That shouldn't have been the case but WWE have demonstrated regularly that they're incapable of elevating two acts at the same time. R-Truth drew the short straw.


Autumn saw 'The Suntan Superman' enter into a worked shoot angle of his own. He formed a partnership with fellow loose-ender The Miz and unsuccessfully challenged Air Boom for the tag team titles at Night of Champions. Due to Miz attacking the referee of that match the pair were fired.


The next month’s Hell in a Cell show was main evented by John Cena v CM Punk v Alberto Del Rio in a triple threat Cell match and featured Awesome Truth slipping out from under the ring to attack all three combatants. Their actions were portrayed as unscripted. The show ended with Truth and Miz brawling with COO Triple H in the aisle as the entire roster crowded around. It was a bizarre approach for a WWE card in this day and age


It all seemed to be hinting at something huge. A bold new approach to the way WWE presented its storylines or a massive push for Truth and 'The Awesome One'. It wasn't either. The pair were reinstated on TV in a thoroughly generic manner and went on to defeat Tripper and CM Punk at Vengeance. It was then announced they were the opponents for SuperCena and The Rock at Survivor Series.


Sounds like a good spot? It was, but the twosome were treated like the expendable mid-card talent they were when bell time came in their Survivor Series bout. They were split on the following evening’s RAW and then drifted off into obscurity.


A few months later Truth had morphed back into a bland good guy. That he held the hand of Little Jimmy as he made his way to the ring was a nice holdover from his storyline the previous summer but it was also depressing that nothing else of the period remained. Truth playing the face again wasn't a problem in itself: he was and is good in the role. It was disappointing that nothing had come of some of wrestling's best antagonism of the year.


If you were being charitable you could point out that 2012 saw Truth form a popular team with Kofi Kingston and reign as a tag champ for over four months. The tag title reign is a fact but only came about because there were no alternative teams available. The popularity claim would be pure fantasy: nobody was clamouring to see Truth and Kingston teaming together. 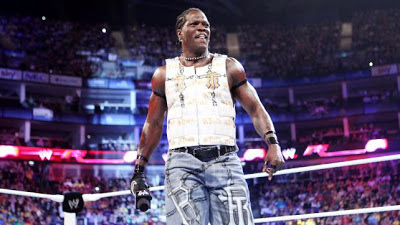 Push this guy... and Little Jimmy too


Since he and 'The Wildcat' went their separate ways Truth has sunk to his lowest point since before his heel turn. He's had a string of meaningless TV and pay-per-view matches and was never in any danger of wrestling on the WrestleMania card. He didn't even appear in the Royal Rumble. That says it all.


R-Truth proved in 2011 that he could be a valuable part of the WWE product. As the company is desperate for reliable guys right now they should be making more use if him.


Another heel turn wouldn't work. Having initially been done so well two years ago a repeat performance would have very little impact. More to the point, Truth is one of only a handful of faces that can be regularly sacrificed to Wade Barrett and Antonio Cesaro. If there were a mid-card scene to speak of he could be put to good use there. But there's not, and creating one doesn't seem terribly high on WWE's list of priorities.


I think the best thing that could be done with R-Truth now is to have him reform Awesome Truth. The Miz will soon stop playing movie star and become a full-time wrestler again. There's nothing obvious for him to return to as a singles guy and we've established Truth's doing nothing interesting so pairing them up again would give both a purpose. They had good chemistry during their original run and as they’re both faces now it would be easy for them to put a fresh spin on their act.


Stick them in a feud with the Rhodes Scholars for two months, have them win the programme, and it's just about conceivable that they could be used as challengers to The Shield over the summer. Like the idea it not it's a better use for two name talents than having them tread water.
Posted by Dave at 21:25