The Rise and Fall of Jay Briscoe

On Tuesday the state of Delaware passed a bill making same sex marriage possible. This did not go down well in the ideaspace that is Sandy Fork. Reigning ROH world champion tweeted the following:

The Delaware Senate passed a bill yesterday that allows same sex couples to get married. If that makes you happy, then congratulations!!!!!!

Which seems fine. Pretty positive and supportive, yes? Sadly he followed up with this:

... try and teach my kids that there's nothing wrong with that and I'll f**ing shoot you

Living in a notoriously "free country" like the United States of America Jay is entitled to his opinion. But equally those with sexual preferences different to his are entitled to get on with their private lives however they deem fit.

Even in 2013 there are going to be small-minded people with homophobic, racist and sexist views. That's a sad fact of the world we live in. There will always be prejudice on some level. But you'd expect someone who travels the country for a living, exposing themselves to as wide a range of backgrounds and demographics as the USA has to offer (and it seems to have quite a lot), to have a more tolerant view. Or at least the sense to know when to shut up and keep their antiquated views to themselves.

As the world champion Jay Briscoe is the face of Ring of Honor. That may be a bit of an old school view but I think it's still true. When a wrestling company puts a world title on a wrestler they're not just rewarding them for hard work, they're endorsing them and promoting them as the best they have to offer. The only company in which this isn't true is WWE, in which John Cena is the perpetual top dog no matter who has the belt. But of course if they did put the WWE championship on someone who expressed so openly the sorts of views Briscoe has done the title would be switched at the first reasonable opportunity.

So is this what we can expect ROH to do? Will Jay drop the title at the first opportunity? So far there's been no indication that that will happen (although in fairness ROH would hardly announce a title change is planned). Ring of Honor have issued an apology and stated that they value all their fans, no matter their “age, gender, race, religion or sexual preference.” Nothing else has been said on the matter. The promotion immediately went back to shilling their upcoming shows after issuing the apology via Twitter. 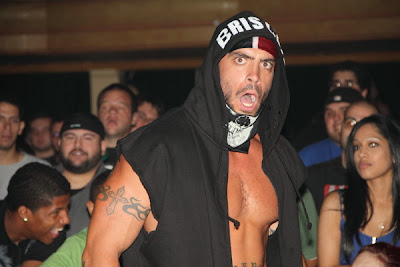 Expect this guy to drop the title pretty soon

Is an apology enough? For now I don't see what else they can do. Briscoe has deleted his Twitter account, a wise move under the circumstances, which will prevent any similar incidences occurring. Short of stripping Jay of the title there's nothing else the company can do until they promote an event.

The next two announced defences Jay has are against BJ Whitmer at the May 18th TV taping and his brother Mark at June's Best in the World iPPV. A Briscoe to Briscoe title change seems pointless. One has to assume Mark holds the same sort of opinions on these matters as Jay. Even if he doesn't people will assume he does. It wouldn't rectify the situation at all.

BJ Whitmer would be a decent short term solution, but I'm convinced Jay was only going to have a short reign himself. Switching from one (assumed) interim champ to another seems like a poor move. Whitmer’s a good enough brawler but he's not exactly the personification of ROH. He's a mid-card guy. If someone of his level were to get the world title it could devalue it.

Of course the title is already in a pretty bad way being around the waist of a homophobe, so that’s going in ‘The Buzzsaw’s’ favour.

There's nothing to stop the company booking an impromptu challenge scenario in the coming weeks. An in-ring Briscoe promo could easily be interrupted to set up a title match. The challenger could win and Jay, as well as Mark for safety, could take a leave of absence.

Since you ask (I know you were) I think a good choice to take the belt in a “surprise bonus” title match (at the TV taping or the San Antonio or Columbus live events) would be Mike Bennett. I can't imagine he's ever going to get the belt under any other circumstances so it's not like ROH would be passing up a lengthy, memorable first reign.


Bennett’s unique status as someone who might leave for a spot in NXT soon would make it an interesting situation similar to 2005's Summer of Punk storyline. He could manage a couple of months at the top before dropping the belt to whoever Jay was originally planned to. If that was Matt Hardy then fine. Even 'The Prodigy' could play babyface opposite that toad.

I'm not going to advocate sacking Jay over this. He said something stupid. While he shouldn't remain the face of Ring of Honor there's no need for him to lose the only job he seems to have trained for and the means to support his family. Hopefully whoever the next champion is will think twice before expressing these sorts of embarrassing views or better yet won’t have them in the first place.
Posted by Dave at 20:34