Up until 2011 Christian had had a career free of major injuries. That changed in November of that year when he suffered an ankle injury on WWE’s European tour. It’s not been the only one he’s suffered since then. Perhaps karma's making up for lost time.

You've got to feel for the guy. 2011 was the year he finally hit it big in WWE, becoming a two time World Heavyweight champion during a main event run opposite Randy Orton. He entered some of the best performances of his career, both in the ring and on the microphone, during that feud, proving he belonged at the top.

As good as his performances were his first run as a headliner was never going to be a permanent thing. WWE management, in particular head honcho Vinnie Mac, have made it clear over the years that they don't view 'Captain Charisma' as main event material. Had he not suffered his injury and remained a regular on TV it's possible he could have earned his way back to the top. Losing that face time on TV derailed him. At the very least he’d have had a slot on the WrestleMania card. 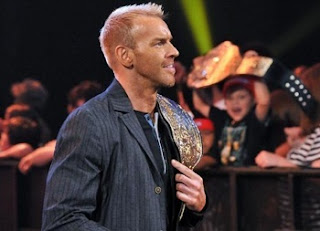 Not a sight we're likely to see again

When he returned last year it was to a mid-card position. Perhaps to hammer the point home he was given a meaningless two month-long reign as the Intercontinental championship. Because nothing says "this guy's no longer a headliner" quite like putting a meaningless mid-card belt on them. Not that it mattered: he barely had enough time to re-establish himself before he was struck with another injury, this one to his shoulder. He disappeared from our screens again shortly after dropping the Intercontinental title to The Miz at RAW 1000 and, barring a brief appearance to testify that Sheamus's Brogue kick is indeed formidable, hasn't done anything noteworthy since.

For the second year in a row 'The Instant Classic' missed WrestleMania. That must have been a blow to him. It's unlikely, given how packed this year's card was, that something would have been found for him, but we (and he) can't know for sure. It’s possible he’d have found himself involved with something had he been in the right place at the right time.

Christian has apparently been healthy enough to return to action since before ‘Mania. Personally I thought he'd be back on TV by now. It seemed logical to assume that 'The Man of the Peeps' would be brought back once all the big names had departed. That more big names departed than was expected makes Christian's continued absence stranger still.

It no seems as though his return will happen sometime after Extreme Rules. Brock Lesnar and Triple H will probably both disappear both disappear after May 19th. I don't think 'The Pain' will be back until around SummerSlam and Triple H will probably be gone for longer. Undertaker will likely be joining join them on the benches, if he even wrestles on the show to begin with. There's even a chance that current WWE champ John Cena will be taking some time off.

If all of these departures happen WWE are going to have to scramble for name performers to replace them, and the already absent CM Punk. Christian may not be the biggest name available but he's a reliable guy who can work as either a hero or an antagonist and seems to be far more popular with fans than management like to admit. His feud with 'The Viper' shows he'll be accepted as a top line guy.

Should Cena require time off and the title ends up on Ryback Christian isn't the worst guy that could be pitted against him. He could work a brief one month feud with Ryback culminating at Payback (a first time match occurring on a show titled after revenge isn’t going to bother WWE), allowing something more substantial to be planned for the summer. He’d be a placeholder but at this stage of his career it seems like that’s all he’s destined to be.

I admit Christian wrestling for the WWE championship on pay-per-view is a longshot. He’d be more likely to come back into the same middle of the card spot he was given last year. Even if that’s what happens at least we’ll have a reliable hand back on TV. That’s what WWE needs right now.
Posted by Dave at 19:51