This is blog post 434. Considering the title reign that ended on Sunday night I feel that warrants a mention.


The January 28th RAW was never going to hit the heady heights of the Royal Rumble. The previous evening’s pay-per-view was WWE’s greatest show in months, failing to deliver a single duff match and setting several of the company’s key figures off on the Road to WrestleMania in spectacular fashion. RAW could be great, but it couldn’t be better.


Thankfully WWE didn’t let its audience down. It delivered a hot show for the second night in a row, aided and abetted by a loud and receptive crowd in Las Vegas.


The evening kicked off with former WWE champion CM Punk storming down to the ring with Paul Heyman in tow. Taking a microphone Punk announced that it was day 435 of his title reign because he had beaten The Rock at the Rumble. Which was true, if you overlook the fact that the match was restarted (which Punk stated was “illegal”). Punk then stated that because of his victory he was the new, and reigning, People’s champion.


Moments later Punk indirectly acknowledged that he was not the WWE champion anymore, which made his previous statements odd. It was another case on a growing list of Punk being given a little too much free rein on the microphone. Contradictory promos like this do neither him nor the company any favours.


Vince McMahon interrupted Punk’s vague ranting to inform him, Heyman and the crowd that he would be giving Heyman a performance review later on in the evening. Yes, Paul Heyman, who had returned to the company as an independently hired legal advisor to Brock Lesnar before entering into an independent managerial relationship with Punk, was going to be subjected to an employee performance review. That’s WWE logic for you.


Hour two of the show kicked off with John Cena handing Cody Rhodes a quick loss. ‘The Magnificence of Moustachioed Excellence’ had had a very productive evening in the Royal Rumble match the night before so of course that good work had to be undone by Cena. If it hadn’t been then maybe Rhodes could have been seen as a rising star. Cena can’t be having that.


Following the tussle ‘The Franchise’ grabbed a microphone and cut a promo that was almost, but not quite, as bizarre as the one he cut last week to hype the Rumble match. Cena went to painstaking lengths to make it clear that if he wrestles either The Rock or CM Punk for the WWE championship the odds will be against him. He lost his one and only match against ‘The Great One’ and has fallen to Punk the last six times they’ve clashed.


I’ve no idea why Cena was scripted to come out with this rubbish. Firstly his mention of facing Punk was irrelevant. The Rock is the current champ so he’s the one Cena would be facing. Punk could regain the title by WrestleMania but Cena didn’t phrase things that way. The way he was talking it was as though Punk v Rock was still yet to happen.


Cena’s words also did no favours to Alberto Del Rio. ‘The CeNation Leader’ didn’t mention the World Heavyweight champion by name but he did say that he had a better statistical chance of winning that title. In other words ADR is not in the same league as The Rock or CM Punk. That’s true, he’s not. But Cena shouldn’t be saying it.


The Rumble winner milked his decision for a few seconds before announcing that he would challenge for the WWE championship at WrestleMania XXIX. Yes, Cena will go against the odds and try to become an eleven time WWE champ!


The Shield ran in to attack Cena. He fought them off for a moment, because he’s John Cena. Eventually he went down and Sheamus and Ryback came out to make the save. They got flattened too. A Shield v Cena and two partners match at Elimination Chamber seems a strong possibility. ‘Big Hungry’ would be a likely second man for the face team. Sheamus could be a third but he’s just as likely to go into the SmackDown WHC bout. Then again we could just see a three-on-two handicap match.


The Rock came out to make a well received victory speech. He put over being an eight time champion as the most prestigious accolade of his career. That was exactly the right approach. Making it clear that title means something to him makes it mean more in the eyes of fans. If that’s the case then people are more likely to care when a title change occurs. As WWE expects people to pay money to watch title defences that’s a good thing. 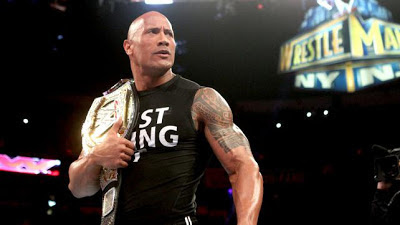 Something tells me this guy won't be having a 434 day title reign
Punk crashed the party to call Rock a thief. He said he would grant The Rock a rematch at Elimination Chamber, another comment that was probably supposed to make a deep and meaningful sense but didn’t. Rock agreed. Perhaps Cena’s promo was originally due to go on after this exchange. That would explain why he was uncertain who he’d face despite there being no announced return bout when he opened his gob.


A singles match at Elimination Chamber is absolutely the right thing for the show. Putting Punk and Rock into a Chamber bout together would dilute the importance of their rivalry. It would also result in numerous performers being treated like jobbers in order to clear the way for Rock and Punk to clash as the final two men in the cage. Considering the thin spread of headliners on the current roster it’d be a struggle to lash together two Chamber bouts anyway. Better to concentrate the star power in an Elimination Chamber for the World Heavyweight belt.


The evening ended with Vince McMahon’s performance review of Paul Heyman. The former ECW boss admitted that he lies every day because he is a promoter. That is, apparently, the sole defining trait of people in this line of work. Well, that and promoting.


Vince asked Heyman if he was involved with either Brad Maddox or The Shield. Heyman said he was not. The chairman then introduced backstage footage that revealed that Heyman was lying. It saw Heyman in a dimly lit area of an arena (in LA according to Vince) telling Maddox that his services are no longer required.


Maddox had apparently been manoeuvred into position as a referee by Punk and Heyman with the intention of having him aid ‘The Voice of the Voiceless’ in title defences, including at Hell in a Cell (which he did). But instead of being happy to aid the champ as and when required Maddox had constantly badgered him for cash.


Heyman then introduced The Shield, who were happy to be paid as and when they were offered “work”. The trio then battered Maddox and his cameraman as Heyman wandered off.


I liked this reveal. I like the concept of Punk using NXT as his own personal recruitment service. I liked Ambrose, Rollins, and Reigns being depicted as hired mercenaries. At this point it’s the best way to go with their characters. It allows them to move away from having mysterious motives and getting on with having more conventional feuds (such as their developing problems with Sheamus and Ryback) while still allowing them to interfere in larger matches. It also created a reason for The Brad Maddox Experience to happen in the first place. 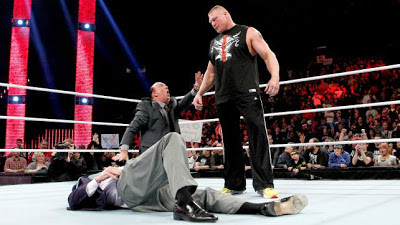 Vince doesn't like selling. We're lucky he didn't do a kip up
Vince went to fire Heyman only to be interrupted by the entrance music of Brock Lesnar. ‘The Pain’ sauntered to the ring and stood nose-to-nose with Vince. Heyman tried to talk his charge out of whatever his plans were (it was played as though he had no knowledge of what Lesnar was doing, although considering what had just happened that’s probably not the case). Naturally the 67-year-old Vince didn’t back down to the former UFC champion. That’s not his style. Because of this lack of humility, and sense, Vince was hoisted up to take an F5.


Lesnar then stood back up and did his trademark Irish jig before exiting the ring. RAW went off the air with a pensioner lying motionless in the ring.


The build to Triple H v Brock Lesnar II has begun, as has the Road to WrestleMania.
Posted by Dave at 16:18