The (World's Strongest) Slam Heard Round the World

On Monday's RAW Mark Henry interrupted a John Cena promo. Dressed in a snappy salmon pink jacket, Henry told Cena he could put his guard down and that he should stay in the ring for what was about to be said. Before he said anything more the crowd started up a “Henry!” chant. The reason for that was the rumour that Henners was going to announce he retirement.


Henry said he respects everyone who works for WWE before making the bizarre claim that he was a “seasoned veteran” when Cena got called up to the main roster in 2002. He’d been in WWE six years at that point, so hardly a season veteran. He was also dreadful in the ring. It’s only the last few years that have seen him become passable in the ring. 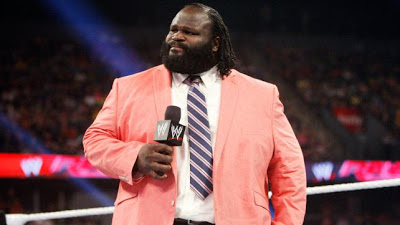 Snappy dresser
Anyway, ‘The World’s Strongest Man’ told the champ that the way he’s going he’s going to be the greatest WWE champ ever. If you consider a large number of reigns as the key to greatness then Cena is already the best ever as far as the WWE championship is concerned. Personally I think there’s more to the greatest label tag than that. But I digress.


Henry continued by saying that if he had one regret it was failing to be WWE champion. And then he announced that he was retiring, which got loud boos and a chant of “One more match!” It was a generous crowd. It was at that point that Cena handed over his title belt for Henners to pose with. The crowd lapped it up. 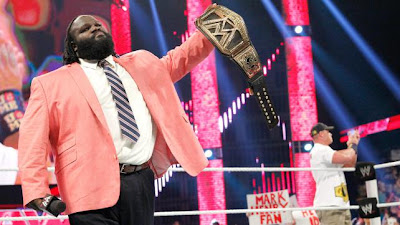 Mark Henry with the WWE title there
After mentioning that he was on the road two hundred nights a year Henry talked about getting to spend more time with his family. He then raised up his arms and soaked in the amazingly warm response from the crowd. Cena came into the ring, raised the retiree’s hand and then went in for a hug.


At which point Henry then swerve turned on Cena, scooping him up and hitting him with a World's Strongest Slam. He strode up the entranceway, the crowd alternating between chants of “Henry!” and “You still got it!” Once at the entrance Henry bellowed "That's what I do!", his unintentionally hilarious catchphrase.


Yep, it was a setup all along.


Everyone involved in the sequence deserves an enormous amount of credit. The entire thing was brilliantly executed. Henry displayed a completely unexpected ability to act: his performance felt so real and full of emotion that it was easy to believe he really was calling it a day. It’s destined to become a career highlight.


The WWE office crew played their part well too. Using social media and rumour websites to their advantage WWE carefully leaked information and posted conjecture on their official outlets that 'The WSM' was retiring. The audience was prepared for Henry's announcement, which ensured they reacted in the desired fashion. Had the announcement not been setup it's possible Henry's speech would've been met with indifference or, worse, cheered. Instead the audience were primed to give Henry a hero’s send off.


Even Cena was good. It didn't seem like he was propagating a storyline when he proffered his title to Henry and he reacted in a completely believable manner to everything covered in the speech. If he'd mugged his way through, as he does all too often, then ringsiders may have guessed what was coming and its impact would've been lost.


It's the social networking and planned leaking that impresses me the most. It shows that when WWE staff put their mind to it they can use these things to their own advantage. It would become tiresome if it happened every week but once in a while I think it can be very effective. It's nice to see WWE finally experimenting with false information and more subtle teases. 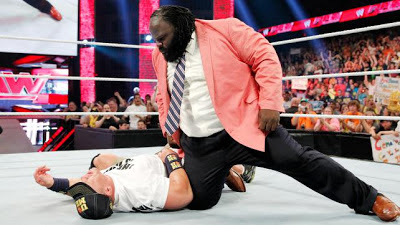 This is what he does
The segment was great. Sadly I don't think the matches that follow will be. I think the approach did a good job of casting Henry as a heel (the audience cheered him but that’s probably because they realised they’d been a part of something special and that things were happening at the expense of the hated Cena), and there's plenty of time to increase the disdain felt for him before he locks horns with Cena at Money in the Bank. But ultimately we're left with the same problem we have with all Cena matches: Cena's involved.


No matter how good Henry is at being bad in the coming weeks there are some people who just won't cheer Cena. As far as this particular story goes it's a shame. Henry deserves to be treated as a heel for his quality work. Obviously the quality of the matches they have will be abysmal, but WWE has done the best they can to give what would've been a deeply tedious feud a good start.


Once again I congratulate them on the good work.
Posted by Dave at 11:03