Best in the World 2013 preview

This Saturday Ring of Honor will present its third annual Best in the World pay-per-view. Over the last two years the event has been used as a mid-year turning point for advancing or starting feuds and storylines, most notably the Eddie Edwards v Davey Richards rivalry in 2011. The previous BITW events have been worthwhile affairs, second only in importance to Final Battle.


This year's show is going to have its work cut out if it's to compete with its predecessors. The Jay Briscoe v Mark Briscoe main event does not, in my eyes, immediately scream "quality". That's not helped by the fact that I'm not the Briscoes biggest fan. Yes, they've been with the company "since day one", but they're a tag team. Tenure does not (or at least it shouldn't) entitle anyone in wrestling to a spot they're not necessarily cut out for. And I don't think the Briscoes, as opponents, are cut out for the main event.


The Briscoes battling for the ROH championship will, in short, be a peculiar sight. Hopefully their match will be kept under the twenty minute mark and they'll be allowed to brawl around ringside. That's the best way to handle the match, letting them play to their strengths.


I expect Jay to win. The champion will defend the title against Matt Hardy at Sunday's TV taping and I expect the belt to change hands there. Having Jay lose to Mark only for Mark to lose to Matt the next night doesn't strike me as something ROH would do. Mark doesn't strike me as a world champion either (but then neither did Jay). I think it'll be Jay entering Sunday's match against Hardy with the belt. 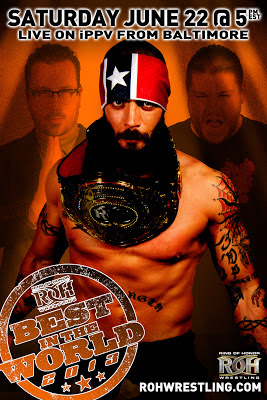 Jay Briscoe, centre stage on another poster
Speaking of SCUM, the group has been included in Best in the World's other two title matches. This is the result of storyline complaining from Steve Corino about his boys being locked out of title contendership. I was perfectly happy with the original matches that were announced. ROH could have afforded a night light on SCUM.


The tag team title match will see champions reDRagon defend against Caprice Coleman and Cedric Alexander and SCUM members Cliff Compton and Rhett Titus. The prospect of C&C facing Fish and O'Reilly alone appealed to me far more. I've wanted to see them given a larger role for around a year now and it seemed as though they were finally going to get that here. Perhaps the match will be revisited in the future. I remain hopeful that Coleman and Alexander will get their turn as a top team eventually.


As far as the match goes I think the addition of Titus and Compton will hamper the quality. The original match could have seen some fast and slick exchanges. A triple threat will make that trickier to accomplish.


I'm going with reDRagon to win. They still have plenty left to do as champions. They could lose the titles and then win them back later but what would be the point? The current approach seems to be longer reigns for the secondary titles.


The other match SCUM have been added to is the TV title match. It was originally going to be Matt Taven defending against Jay Lethal. MTV will now defend against Jimmy Jacobs as well. This will be the third iPPV of the last four that sees the television belt defended in a three-way match. Someone should remind the booking team that it's not the X Division championship.


Unlike the tag match I think the inclusion of 'The Zombie Princess' could enhance this match. He's had some highly regarded matches with Lethal this year, which bodes well for some good exchanges in this bout. Taven's not a slouch himself, he'll contribute to the match too. It could be a surprise match of the night.


I'm going to predict a successful defence for Taven, but that's as much wishful thinking as anything else. I like his current status as a slightly unworthy champion who has to rely on Truth Martini and the Hoopla Hotties to win. We could just as easily see Jacobs benefit from SCUM interference to win his first ROH singles title or Lethal become the first multi-time TV champ. Long term it's Taven that needs the title most.


Speaking of the TV title two former holders of it will clash at Best in the World: Roderick Strong and Adam Cole. A few months ago Strong was a heel. Without any particular turning point or change in character he has become a babyface. Cole'a the opposite. He was a happy, smiley good guy into hand-slapping and morals a few months back. Losing the television title to Matt Taven and then failing to defeat Jay Briscoe for the world title has made him bitter. He is now an out and proud bad guy.


There's not a particularly interesting reason for this match to happen, not that that matters. Strong and Cole will tear it up and do their best to have the match of the night. Both men could do with a win because their iPPV records this year aren't the greatest. I think a Cole win would make more sense so that's what I'm going with.


I originally said that Tommaso Ciampa v Michael Elgin would be held off until after this show. Looks like I got that wrong. I think it could be a great match. The story is basically that 'The Sicilian Psychopath' feels he could have made it to Elgin's spot on the card had he not been injured last year. For his part Elgin wants to beat Ciampa to prove he's the more worthy of an ROH title shot (which, for the record, he's already earned).


I'd like to see Ciampa win but I think Elgin will get the nod. He's not had a huge amount to do lately and is closer to being a major star than is Tommaso. Perhaps a loss will be used to tip Ciampa over the edge and make him a heel, although he's had stirring responses since his return so perhaps not.


Perhaps the least interesting match on the card is BJ Whitmer v Mike Bennett. Whitmer is like the Briscoes, respected more for the length of time he's worked for ROH having hard-hitting matches as for the quality of his wrestling. I like Bennett as a character, and it's always nice to see Maria at ringside, but his wrestling style always feels a little out of place in ROH. He has improved since debuting a couple of years ago though. That's a positive.


I'd like to see 'The Prodigy' win this match. There are still rumours floating around that he's heading to NXT. ROH could make use of that by building him up with plenty of wins, making a loss in his final appearance mean more. If that happens then it could be ROH trainee 'Cheeseburger' that gets the honour of a stature enhancing victory over Bennett. He's been moved into a rivalry with Bennett by kissing (or sexually assaulting, call it what you will) Maria so a match between the two seems likely.


All that said I've predicted a lot of heel victories so far (and I'll be predicting another below). I don't think the promotion will present such an unbalanced card so I'm going to predict a win for 'The Buzzsaw' here. Perhaps 'Cheeseburger' will interfere to protect 'The Prodigy' in defeat. I'll be cheering for Bennett.


The second tag match on the card will see the American Wolves face ACH and Tadarius Thomas, who have picked the team name Adrenalin RUSH. As far as actual wrestling goes this is the match I'm most looking forward to. Both teams are fast and I think the intensity of the Wolves will work well with the high flying of the RUSH boys. That Richards and Edwards are very generous when it comes to making their opponents look good wont hurt either. It should be a fantastic match.


A month ago I thought Adrenalin RUSH were being built up for a title match with reDRagon, so I was puzzled when they lost a number one contenders match on TV. That loss now makes sense. It was done to keep them free for this match. Winning here would make them very credible challengers but I don't think it will happen. I think the Wolves will win a tough contest, only barely overcoming the younger team.


Finally there's the storyline main event: a singles match between Kevin Steen and Matt Hardy. As I mentioned above I think Hardy, 'The Jesus Christ of Professional Wrestling', will be winning the ROH world title on Sunday. That creates reasons for him to both lose to and beat Steen.


If Hardy defeats 'Wrestling's Worst Nightmare' and goes on to capture the top prize then there will be a natural story of Steen having to spend six months earning a title shot at Final Battle. The audience would be encouraged to be more supportive of him whenever his title match with Hardy came because he would have been cast in the underdog role by the BITW loss. Beating Steen would also make Hardy even more unpopular than he already is. The win would also allow Hardy access to the cowardly heel tactic of refusing a title match because he's already beaten 'Mr Wrestling'.


Steen beating Hardy on Saturday would give him a legitimate argument for a title match as soon as Hardy's the champ. Hardy could then spend six months avoiding a rematch with Steen, creating more heat, before finally having to face him at Final Battle.


Of the two stories I think the one that would most make sense is the first. I think Matt Hardy will win and that Corino will spend months claiming that Steen's loss means he doesn't deserve to get in the ring ever again with Matt Hardy.


Of course I could be wrong about everything regarding the next six months for ROH. Perhaps Jay Briscoe's reign is going to stretch into 2014. Who knows?


I've really enjoyed the pay-per-view and TV product of Ring of Honor over the last six months. They've got a strong central plot with the SCUM invasion and they've finally expanded the roster and started pushing new talent. I'd love to see Best in the World get the second half of the year off to a good start for the company. I think it will.