It's a good sign for the future but I don't understand how the NXT roster has a better tag team division than the WWE roster. The latter's meant to be the main stage, the big time, and it has access not only to the established guys we’re all familiar with but also to anyone and everyone on the developmental roster. NXT has to make do with those guys not deemed ready for the main stage.


It’s not a situation that should have come about. But it has. NXT’s doubles scene is the superior.


The main roster has just three tag teams of real note. The Shield tandem of Seth Rollins and Roman Reigns, Daniel Bryan and Kane's Team Hell No, and the Prime Time Players. Of those three double acts it can only be said that two are genuinely cared about by the majority of the audience (the odd ones out being, of course, the PTPs). Of those two teams only one appears to have a future beyond the next month or so. WWE have begun teasing the split of Bryan and Kane in favour of utilising ‘The World’s Toughest Vegan’ as a singles act.


So that's one team, The Shield, in WWE with a secure long term future that are over to a significant degree. They're backed up by Jimmy and Jey Uso, 3MB, Tons of Funk  and (possibly) the Rhodes Scholars. It's not what you'd call a thriving division.


Meanwhile the developmental system has multiple teams of note. It's fitting that the Wyatt Family, Luke Harper and Erick Rowan, are the current NXT tag champs because they're the best unit in the league. They look different to everyone else, they wrestle well, have a fascinating gimmick, and a captivating manager in Bray Wyatt. 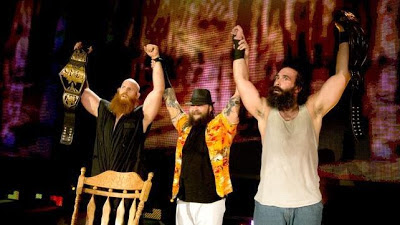 Can the Wyatt Family help to breathe life back into the WWE tag team division?
If the main roster's tag scene was taken seriously I’d predict immediate success for them upon their debut. I don’t think it’s a sure thing though. There’s obviously a plan in place for their debut, because that’s been a priority for all call-ups over the last year, but any debuting tandem needs a division with some teams that can be sacrificed. That’s not the WWE roster.


Debuting as heels (which is almost guaranteed to happen) could harm the Wyatt Family’s chances of creating a stir in the division, because The Shield have carved out a niche for themselves as the heel team of note. It won’t be impossible for the Wyatts to get over, but it will limit WWE’s options with them.


The Wyatts are backed up by the recent alliance of Kassius Ohno and Corey Graves, Scott Dawson and Garrett Dylan, Adrian Neville and Oliver Grey (well, when Grey’s healthy again), and what looks like a reformed Ascension team of Conor O’Brian and Rick Victor. That's an impressive talent list by anybody's reckoning.


Ohno and Graves may not have been together long but they gel well as a unit. I don't just mean they're chemistry in the ring, it's their look as much as anything else. They seem right as a unit. That's a very important first step. Like most people I’d prefer to see the Kings of Wrestling reformed but it’s not going to happen. Ohno and Graves could be a decent substitute.


Dawson and Dylan both look very nondescript but showed a lot of promise as characters in their recent debut. They’re doing a gimmick comparable to Lance Cade and Trevor Murdoch or America’s Most Wanted. They’re country boys who like to wear baseball caps and drink beer. In this case they also like to carry BBQ sauce to the ring with them. As a signature foreign object choice it’s pretty interesting.


Also in Dawson and Dylan’s favour is the fact that they’ve been given a manager: the easy-to-dislike Sylvester Lefort. His charisma will help to mask their apparent lack in the area. If the unit can come up with a name they could do well for themselves in WWE.
Keep these guys with Sylvester Lefort and they could go far
It’s too early in the story of the apparent new Ascension to decide whether or not the two will work as a team. Based on looks alone Victor’s a good choice for Conor’s new playmate. His previous matches have been uninspiring but technically fine. Maybe they’ll be able to recapture the success the original Ascension managed to have.


Grey’s almost guaranteed a call-up alongside Neville when he’s healthy again, assuming Neville isn’t promoted first of course. An exciting babyface combo is exactly what the WWE roster needs to combat the likes of The Shield and The Wyatt Family. If WWE wanted to put Neville into a team before Grey’s return they could always stick him with Sami Zayn. I think they’d be great together.


I've written at length before now about WWE's lack of interest in their tag team division and why it would benefit them to reverse the stance. It's finally coming back to bite them here. Not only is their developmental league showing up their international roster of Superstars but The Shield's standing is at risk.


By putting the tag team championships on 'The Hounds of Justice' WWE have drawn attention to them as a unit. They're now in a position where fans will expect them to wrestle in tag team matches regularly. It will become apparent very quickly if they keep getting cycled through the same opponents because they've been such a heavily pushed act. Constant rematches will only make people bored of them.


The title defence against the new combo of Randy Orton and Daniel Bryan will be a nice change and the rumoured match against the Undertaker and Kane at SummerSlam could be very exciting but they’re one off matches. The Shield need regular units to oppose.


The answer to these troubles, as I've written before, is for WWE to take tag teams seriously. Call up the Wyatt Family and Neville and Zayn and create some regular teams from the guys on the roster who're currently treading water. Oh, and promote whoever's been scripting NXT for the last year. They're great at their job.
Posted by Dave at 10:11