Anyone who’s been watching WWE lately will be aware that Daniel Bryan is one of the company’s most reliable and popular stars. The last two episodes of RAW have seen Bryan in the match of the night. On June 3rd he lost to Ryback in one of ‘Big Hungry’s’ best matches to date. This week’s episode saw him cleanly defeat fellow former ROH champion Seth Rollins in a heated battle.


During both of those outings the crowd came alive in a way that isn’t seen too often on RAW these days. They’re not the only examples of Bryan exciting crowds either: he gets rousing responses every time he wrestles. Both Ryback and Rollins pulled their weight in their RAW matches but that the crowd become so raucous so quickly has to be credited largely to Bryan. He has exhibited a mix of character and wrestling ability that’s rare in WWE these days.


A couple of years ago WWE seemed determined to keep ‘The World’s Toughest Vegan’ down in the middle of the card. He was probably viewed as a “reliable hand” who could work solid matches but not actually draw people into his performances enough to become a star. For whatever reason (probably because there were few alternatives) he was given the Money in the Bank briefcase in July 2011, won the belt, and gradually transformed into a conceited heel.


Bryan was incredibly effective as a heel champion and managed to have credible matches with Mark Henry and Big Show in the early months of his reign. That’s something that many other guys Bryan’s size would not be able to do. It’s a fine example of how talented he is.


Bryan was famously met with booming “YES!” chants at WrestleMania XXVIII. Fans booed loudly when his World Heavyweight title match against Sheamus was cut shorter than expected, again indicating that Bryan was someone fans wanted to watch. He received a similarly positive reaction on the following evening’s RAW. When the chants stuck around he gradually reverted to the babyface role.


WWE didn’t expect Bryan to get over to the extent he has. He’s a perfect example of someone using what they’re given by the writing team to transform themselves into a star. Bryan used the exposure being the WHC provided to form a bond with fans. That’s how you make yourself indispensable within WWE. 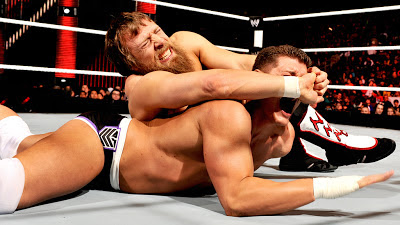 This should be renamed the Dazzle Lock
The company has been using Bryan aimlessly for months. He was placed into a tag team with Kane and the pair wandered from one programme to the next, working most notably with the Rhodes Scholars and pairing up with singles wrestlers to clash with The Shield in six man tags whenever required.  The reason Team Hell No have battled ‘The Hounds of Justice’ so often is because WWE has had little else for them to do. They were conveniently placed good guys. There’s no other reason than that.


Since losing the tag team titles at Extreme Rules Bryan and Kane have been subtly distanced from one another. Bryan thinking of himself as a weak link was originally going to lead to a singles match with Randy Orton at Payback (somehow). It has instead led to a tag team title match for the pair.


I said in my Payback preview that I think Reigns and Rollins versus Bryan and Orton will be the match of the night. I don’t expect ‘The Apex Predator’ and ‘The King of Beards’ to win the belts. Nor do I expect them to become a regular team. I’m also inclined to believe we’re close to seeing an end to Team Hell No.


So what’s Bryan going to do next?


Well, the obvious prediction to make is that he’ll head into a programme with Randy Orton. That was the original plan for Payback so it would make sense for it to be postponed. Either man could turn on the other, setting up a clash at Money in the Bank. They could face each other without a turn happening too: Bryan’s feeling that he’s the weak link has been nicely established and could be used as a reason for a face versus face confrontation in which Bryan feels he has something to prove and Orty just wants to shut him up and get a win.


Bryan would also make a very good opponent for Dolph Ziggler. They’ve had numerous great matches before. Given fifteen minutes on a pay-per-view they could do something memorable. Bryan’s popular enough that a loss to ‘The Show Off’ wouldn’t harm him and a clean win (something he’s unlikely to get opposite Alberto Del Rio) would give Ziggler a credibility boost. Throw in AJ at ringside and you’ve got a feud with a nice amount of history to it that would be fun to watch and be compelling viewing. What’s not to like there?


Bryan could even head into a programme with company supremo John Cena. It’s safe to say the match quality wouldn’t rival Bryan v Ziggler, but Bryan’s proven he can get good work out of ‘The CeNation Leader’. It could work as a face versus face rivalry too: Bryan challenging the biggest name in the company for the most important title in order to show he’s not a weak link.


The June 3rd match was evidence that Ryback can have matches that rise above average. A rematch on pay-per-view, given a similar amount of time, wouldn’t be the worst thing in the world. It would allow Ryback to finally pick up a win again and add something good to a show.


A resumption of his feud with CM Punk would be enjoyable. They could wrestle each other for months and produce something new in every bout. A programme with fellow beard-sporters RThe Wyatt Family could be intriguing too. Bryan could almost certainly get good matches from Erick Rowan and Luke Harper. I’d love to see him facing Bray Wyatt. Built up right that could be great.


Part of what makes Bryan so valuable is that he can afford to lose. He’s not someone like Ryback who’s been pushed as unstoppable. He’s been shown to be fallible. That helps audiences to empathise with him and means he doesn’t need to win all the time. His appeal is his character and the intensity he displays during matches. People don’t watch a Daniel Bryan match to see him win (although it’s nice when he does), they watch to see him perform. The ‘Dazzler’ moniker Bryan gave himself a few months ago is very accurate.