Dave Lagana is a bit of an anomaly in wrestling. He's a wrestling fan that managed to get a job as part of WWE's creative department. That's not something that happens too often and it's safe to say that it happened in Lagana's case thanks to a combination of having Writer of Friends (you may have heard of it) on his CV. His timing probably helped too. He started with WWE in 2002. Since then WWE has become strongly opposed to the idea of hiring anyone, no matter what relevant experience they may have, who is a wrestling fan. They want TV experience, not opinionated fans.


Lagana had a fair run with WWE, lasting six years before getting released from his contract (or is that term only applied to the talent?) in 2008. During his time in WWE he worked as a writer on SmackDown, headed up the writing of ECW and was taken under the metaphorical wing of Paul Heyman. As far as wrestling CVs go those aren't bad things to be able to say. Having written Friends doesn't hurt either.


After his release Lagana wound up in ROH. His role there was undefined. During his not wholly unsuccessful attempts to turn himself into a media personality throughout the summer of 2011 Lagana was deliberately vague on the subject of what he actually did for Ring of Honor. He admitted he had the chance to make suggestions regarding the company's creative direction but that it was mostly left up to Carey Silkin, Adam Pearce and, later, Jim Cornette. It seems safe to assume he was more involved with the production side of things rather than scripting. That's what his known employment track record would make him a good fit for.


Lagana wound up getting moved on from ROH in the closing months of 2011. The company went into a creative tailspin shortly afterwards. In fairness I think that was more to do with the presence of Jim Cornette than the lack of Dave Lagana. I could be wrong but I doubt it.


Lagana quickly found himself snapped up by TNA (he was a former WWE employee remember) and started working on the company's Indian spin-off Ring Ka King. Despite being a massively successful and warmly received project the channel that aired Ring Ka King decided to pass on a second series. Perhaps they've got something against successful TV shows? Whatever the reason it didn't matter: RKK had provided Lagana with a chance to prove to TNA management that he could put together entertaining wrestling television. When it became apparent Ring Ka King series two wasn't materialising Lagana was moved over to work on Impact Wrestling.


Lagana's addition to the Impact writing team coincided with the initial push of Austin Aries. With Bobby Roode and James Storm recently established as headliners it seemed like the perfect time for a new writer to come in and take TNA in a bold new creative direction.


It didn't happen. Instead the promising new era faltered just before it was established. 'A Double' performed a senseless heel turn out of nowhere and dropped the title to Jeff Hardy then formed a tag team with former rival Bobby Roode. Meanwhile Hardy enjoyed a lengthy run before dropping the championship to Bully Ray.


I have nothing against Ray or Hardy but their ascension to the top felt like regression. Both men made their names elsewhere while Roode, Storm and Aries could be presented as TNA creations.


As Lagana is not acknowledged as the head of TNA creative it's hard to pin this on him. Bruce Prichard's the man in charge of the scripts and so it's him we should blame for the decidedly uninspiring product TNA puts out. If anything I think we should be encouraged that Lagana's still around and a part of the process. Last year's Impact quality boom coinciding with Lagana joining the team could be a coincidence, but it'd be a big one. It strikes me as more likely that he had a little more say last summer and that it ceased when ratings didn't immediately improve. If that's the case it's unfair. Ratings take time to go up, especially with the amount of choice viewers today have.


Lagana has a proven track record in wrestling. He’s learnt from probably the two most highly regarded bookers ever (Vince McMahon and Paul Heyman). He worked on SmackDown during what is generally considered one of the blue brand’s brightest periods. Ring Ka King was a solid show too, and that is generally credited as the work of Lagana and Jeff Jarrett alone. 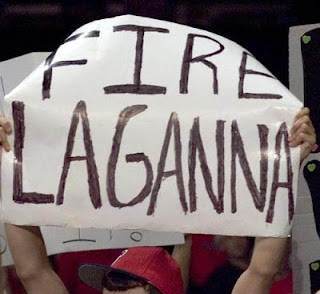 Don't do what this sign says
TNA is clearly not as successful as it could or should be right now. They attract just over one million viewers a week, which is pretty poor considering their time slot and the size of the wrestling fan base in North America. The trouble appears to be that the promotion is happy to settle for the number two spot.


Having old boys like Prichard, Hulk Hogan, Eric Bischoff, Al Snow, and D’Lo Brown backstage is not going to change anything. They’re all interested in booking the same tired product TNA’s been putting out for years now, a strange mix of Attitude Era shock tactics and attempts to emulate the current WWE approach. The bad ratings and disinterest in pay-per-views (TNA are lucky if they pull a five figure viewing number) proves that this is not the way TNA should be going.


The company would be best served getting rid of everyone currently involved in the creative process with the exception of Lagana. I think he deserves a crack at steering TNA for a while. Bring in some fresh blood to flesh out the rest of the creative department. Do something WWE would never do and bring in wrestling fans.


There are plenty of fans out there who have an idea of what they’d like to see from TNA. An online application process could turn up some good ideas and new talent. Under Lagana fans could learn how to format a show, interact with wrestlers, and experiment with the tried and tested wrestling TV formula.


Over the last several years TNA has missed out on signing talent like Tyler Black, Chris Hero, Claudio Castagnoli, Jon Moxley, and El Generico. They’ve proven incapable of holding on to established names like Rob Van Dam. I’m convinced this is largely because they’re presenting such a boring product: wrestlers simply don’t want to be associated with it and would rather take their chances in NXT.


A retooled creative division helmed by Lagana would provide TNA with a chance to go in a new direction. The company should not be satisfied with a number two spot. It should be figuring out a unique presentation and striving to be the best at that.
Posted by Dave at 18:56