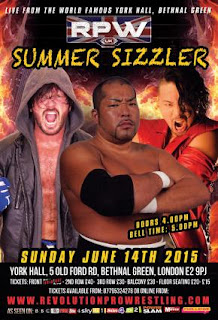 I've seen and reviewed enough RPW shows now to feel comfortable saying that Alex Shane's influence on booker Andy Quildan is clear for all to see. Shane has stated in more than one interview over the years that his approach to booking a wrestling show is to offer something that will appeal to everyone in the audience. This show, like most RPW offerings, very firmly had that philosophy in mind. The show featured former WWE stars, current New Japan stars, big lads, a cruiserweight match, a strong style match, a comedy match, and a distinctly Attitude Era main event. Whatever your tastes in wrestling there was probably something at Summer Sizzler 2015 that would satisfy you.


The show kicked off with Josh Bodom versus Tommy End. The lack of Quildan in the ring to introduce the wrestlers makes me think this was a dark match. When you've got a lad like End in a match you're not intending to release you've got yourself a packed show. Sadly there was no bicycle knee kick, a move End makes look incredible, on offer here. Bodom got the upset win following a move not dissimilar to the package piledriver.


Quildan hit the ring after that, presumably signalling the official start of the show. His first act was to announce that Mark Haskins would not be at the show due to "personal problems." He was replaced in his tag team title defence by Jake McCluskey. This wasn't the first time McCluskey had made his way onto an RPW card as a last minutes replacement. Sooner or later his reliability will be rewarded and he'll net himself a more prominent role.


The match, putting McCluskey and defending champ Joel Redman against Revolutionist members Sha Samuels and James Castle, wasn't especially good. McCluskey spammed moonsaults in the early going (because he's dubbed himself 'Mr Moonsault' at some point in the last year or two), which the crowd appreciated at first but soon tired of. Because, honestly, moonsaults haven't been impressive since the eighties, Jake. I did enjoy Jake and Joel hitting a 3D though. It was an unexpected addition.


The finish saw McCluskey go for a discus clothesline on Castle, only for Castle to duck it and kick him in the privates. Yep, a nut shot was enough to put McCluskey down for the three. Redman took exception to this and gave McCluskey a shove. McCluskey made it clear he'd been cheated but Redman was having none of that and walked off in a huff. Perhaps a match or two with Redman are heading Jake 'Reliability' McCluskey's way.


The third match of the night saw Big Damo beat New Japan's Tomohiro Ishii, a far bigger surprise than the opener had been. 'The Stone Pitbull' spent the opening stretch getting worked over by Damo, something I thought (wrongly, as it turned out) was designed to set him up for a comeback leading to a victory. It's not that the comebacks didn't come, they did, it's just that they weren't enough to put Damo away. Damo survived a dead lift German suplex, a superplex and numerous lariats, among other things, before slumping a worn Ishii in the corner and leaping off a corner to hit a Van Terminator-style drop kick. He followed up with a running senton to get what has to be the biggest win of his career.


The traditional announcement of the next major show followed that. This year's Uprising will take place on October 2 (a Friday) and will be a co-promotion with New Japan. The first match announced is Jushin Liger and Hiroshi Tanahashi against Gedo and Kazuchika Okada. I'm doubtful about Uprising being a full scale co-promotion but that match (and one that will be mentioned below) is very welcome. The more New Japan talent on RPW events, the better.


Speaking of which, the pre-intermission spot was taken by Shinsuke Nakamura versus Roderick Strong (substituting for Ricochet). Not for the first time I found myself questioning the placement of a New Japan performer on an RPW card. Along with Styles Nakamura was one of the two biggest names on the show. The bigger of the two would probably vary depending on who you asked. Judging by the number of shirts and the queue for his autograph at intermission I think Nak was a bigger draw for this crowd. This match would probably have been better received as the opener of the second half. But complaining about Rev Pro running orders is always going to be an act in futility.


Placing aside Nakamura versus Strong was excellent. The first five minutes saw Strong berated for wearing "Shitty, shitty, shitty little boots!", a chant carried over from his recent appearance for the other London-based wrestling group, Progress Wrestling. This included him storming up the entrance ramp and having Quildan tell the crowd that if the subject of his boots wasn't dropped he'd leave. Naturally that didn't work. Roddy would get in and out of the ring a few more times, at one point teasing that he'd take his boots off, before finally starting the match. Nakamura, for his part, seemed to find Roddy's shenanigans amusing. At point while Strong was bickering with a member of the group 'The King of Strong Style' walked into the centre of the ring and bowed, effortlessly making himself the centre of attention and popping the audience.


I thought this match was great and the best effort all night. While I enjoy Ricochet's work I don't think he was as natural opponent for Nakamura as Strong. This was a far better blending of styles than the striker versus flyer effort we would have had with 'ochet. Nakamura survived a handful of backbreakers, the Stronghold and the Sick kick before he polished Roddy off with two Boma Yes. This match alone is worth buying the event for.


After the match Nakamura was confronted by Big Damo, something which immediately examined Ishii's loss earlier in the evening. Damo told Nakamura that he wanted to knock his teeth down his throat. Nak responded with his weird face-on-belly taunt then took a microphone and agreed to a match, ending with a resounding "YeaaOh!" He then brushed past the big lad and sauntered to the back. Quildan confirmed the match for Uprising (funny how quickly he got that signed with New Japan, isn't it?) before throwing to a "brief" half hour intermission.


Will Ospreay's two-out-of-three falls defence of the British cruiserweight championship against Matt Sydal opened up the second half. It took a while to pick up steam and once it did it was technically sound but something about the bulk of it didn't grab me. The root of the issue was probably my disinterest in Sydal as a character, although he played a New Day-esque super-positive heel here once it became clear the fans were behind Ospreay. That was a welcome change of pace.


Sydal got the first fall when he reversed Ospreay's handspring elbow attempt into a reverse hurricanrana and then leapt to the top rope for a Shooting Star press. Ospreay evened things up after he rolled through Sydal's pin off a Final Cut after a brisk sequence of high-flying counters and reversals. He took the false finish-stuffed third and deciding fall with a springboard cutter and a version of the Phoenix splash.


The third fall did draw me in. It provided more evidence that WWE missed out by not pushing Sydal and highlighted that Ospreay is one of the brightest talents in British wrestling. He'll definitely be one of the next guys to get a gig in Japan or on the US indies. The pair shared a handshake after the match, just to make it clear Sydal really is the super-cool guy he's gimmicked to be.


The semi-main event spot was given over to the comedy styling a of Colt Cabana. He was there to settle his feud with Gideon Grey and Rishi Ghosh. This had started when Gideon had made the (absurd) claim that Colt Cabana and Matt Classic were the same person. Cabana had agreed to a tag match with Grey and Ghosh to prove that this wasn't true. And prove it he did. After a bit of teasing Classic and Cabana appeared in the same place at the same time for the first time ever. Classic was met with chants for Grado, CM Punk and Super Dragon. The truth of his identity remains a mystery.


The match that followed was very much a Butlin's style comedy affair (not a bad thing). It's exactly what you want from a guy like Cabana and exactly the sort of thing the Grey and Ghosh characters are designed for (for the record they are an English lord and an Arabic prince respectively... Wrestling!). It's also worth pointing out that I was at the show with someone who's not a wrestling fan (Bea, she's great) and this was one of her favourite matches of the night. This type of comedy match was one of the things I was thinking of when I wrote about Alex Shane's approach offering something for everyone at the start of this review. I think it was the ridiculous characters and silliness of the action that Bea appreciated. Cabana got the win by making Grey tap out to the Billy Goat's Cutse while Classic held Ghosh in a sleeper.


The main event was Marty Scurll (the star of ITV's Take Me Out (no, I'll never get bored of this)) versus AJ Styles for Scurll's British heavyweight championship. They had a great main event style match that drew me in despite my lack of interest in Styles. I'm award I wrote this about Sydal too. Maybe I just have something against Christian wrestlers? Scurll put in a typically slick performance that showed why he's one of the most frequently booked men in British wrestling and why he'd had RPW's top prize for well over a year.


'The Phenomenal One' won the title following a Styles Clash. At first this was a surprise but thinking about it it shouldn't have been. With the title having been on Scurll since March 2014 it was time for a change and this allows RPW to present AJ Styles, a major name, as their champion come the New Japan co-promoted Uprising in October, which will make them look a bigger deal. Plus, there was no way Styles was going to lose clean to Scurll so switching the title allowed the sidestepping of a dissatisfying DQ finish.


This was the second best RPW show I've been to. There were two top notch matches in Nakamura v Strong and Styles v Scurll, enjoyable efforts from Bodom v End and Damo v Ishii, and a fun comedy match. It wasn't going to get any better. The best RPW remains Uprising 2013 for its stacked card and the opportunity it gave me to heckle Davey 'Nippy Weasel' Richards but I wouldn't be surprised if this year's show, boasting Nakamura, Tanahashi, Okada, Gedo and Styles, takes its crown. I look forward to finding out.