A balanced episode, featuring something from each of the three main divisions and managing to hold interest even without NXT champion Kevin Owens.


Tweet 1: Watching that NXT show.
Tweet 2: Michael Cole and John Cena are not the ideal start to NXT.
Tweet 3: Watching Cena take bumps in slow motion does him no favours at all. Pretty telling that him taking power bombs elbow first has been edited.
Tweet 4: #veteranadvice
Tweet 5: Dana Brooke has a spot in the intro now. That'll please the purists.
Tweet 6: 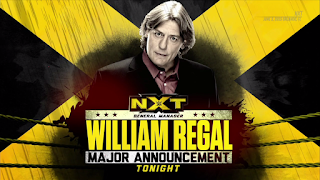 
Tweet 7: Big fan of Breeze's furry cape.
Tweet 8: Liking Rose coming out without the entourage and looking utterly dishevelled. Budget cuts and malaise caught up to him.
Tweet 9: Also digging Rose basically having reverted to Leo Kruger, the audience acknowledging it, and Rose kind of going with it.
Tweet 10: If the Breeze character ever loses steam they could repackage him as a modern day Robin Hood. He has a bit of that look to him.


Tweet 11: This ref is getting his sweat on. He's possibly the sweatiest ref I've ever seen.
Tweet 12: If Adam Rose ever gets released he could get a solid team together with Dalton Castle.
Tweet 13: Rare example of me not enjoying a Breeze match there. Too slow. Nice moments but not enough. It did keep the Beauty Shot strong though.


Tweet 14: Devin Taylor calling Solomon Crowe by his surname. Is he the latest lad to lose a first name?
Tweet 15: Solly reckons he'll be back in the ring with the NXT champ. Good call that. Makes the title mean more.
Tweet 16: Preps someone to replace the current batch of main eventers. Which is needed because they're all injuring themselves or getting call-ups.
Tweet 17: Or both.


Tweet 18: Eva Marie's popular with the crowd isn't she?
Tweet 19: "I love YOU guys!" - Eva Marie to an audience booing her out of the building and chanting that she can't wrestle
Tweet 20: Putting over the women's division. I wonder where this is going...
Tweet 21: Pros and cons to Eva in NXT. Pros: she's got so much heat and helps flesh out the division. Cons: she's bland and can't wrestle.


Tweet 22: Regal's talking up a Network spesh in Japan. Big fan of his pronunciation of Bálor.
Tweet 23: Bálor and Owens should comfortably steal that show.


Tweet 24: Enjoying this crowd not knowing how to react to Carmella. They still don't like her BUT SHE STAYED LOYAL TO ENZO AND CASS.
Tweet 25: Carmella not turning was possibly the biggest swerve of the last half decade.
Tweet 26: Alexa as a mean girl heel though. Big into this.


Tweet 27: Disappointed in Enzo and Cass wearing their own baby blue merch. I thought those guys were better than that.
Tweet 28: Just noticed the lack of signs in the crowd. Are they not allowed at NXT? Is Full Sail anti-sign?
Tweet 29: Let's take a moment to remember that this time last year Carmella was a hairdresser. The progress she's made verges on inspirational.


Tweet 30: Rhyno's not a talker.
Tweet 31: "His theatrics and his mind games aren't going to phase a psychotic man beast like myself" - Rhyno on Finn Bálor
Tweet 32: That was a lol line. Still wish they'd bring in fifty-year-old Don 'Cyrus' Callis to manage him though.


Tweet 33: Sami Zayn here, doing his best to force a Cena heel turn by revealing that it was him that caused the shoulder injury.


Tweet 43: Video package reminding us that Sasha Banks exists and is great. Not that we needed it.
Tweet 44: Such a fan of Sasha Banks. Great character. Great wrestler. The future of WWE's main roster women's division.


Tweet 45: Anyone else think it's weird that the Network special is being held in Japan on Independence Day?
Tweet 46: Finn Bálor revealing he'll be engaging #demonmode in Tokyo. Not surprised by this but it's nice to know.
Tweet 47: "Hi, my name's Rhyno and I like to wear only one kneepad" - Rhyno
Tweet 48: Brief "E-C-dub!" chant there. Hope the audience does a "New Japan!" chant too, to keep things even.
Tweet 49: "Woooooooooo!" - 'The Nature Rhyno' Terry Gerin
Tweet 50: When did announcers stop putting over the thickness of Rhyno's thighs?
Tweet 51: Loving this hoss versus plucky, experienced junior dynamic.


Tweet 52: "Like tree trunks" - Rich Brennan hyping Rhyno's legs and thus earning his keep
Tweet 53: How joyless do you have to be to participate in a "We hate Rhyno!" chant?
Tweet 54: Bálor avoided the Gore and won off a roll-up. Noting this because nobody has kicked out of the Gore since Rhyno's return.
Tweet 55: I thought Bálor might get to because he's Bálor. Apparently not.
Tweet 56: Rhyno's clearly being protected to a degree so he can be that upper mid-card guy lads go through on their way up.
Tweet 57: Then Rhyno killed Bálor by Goring him on the stage. RIP Finn.
Posted by Dave at 08:20