WWE Money in the Bank 2015 preview 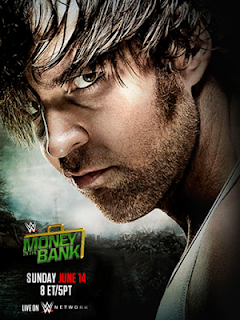 It's been ten years since the first Money in the Bank match took place at WrestleMania 21. Since then it has become WWE's top stunt match and a reliable star-making tool. It's also broken away from WrestleMania to get its own annual show, which is routinely one of the most exciting and eventful pay-per-views of the year.


What's nice about the Money in the Bank show is that it's far enough removed from WrestleMania for the writing team to have moved beyond reruns and be offering something new, generally making the card feel fresh and vibrant. It can usually be taken as an attempt to do something new and get things in place for SummerSlam. Free of the pressures of building towards a fast-approaching 'Mania, or paying it off, Money in the Bank is perfectly placed to be experimental and interesting.


That said there are numerous rematches this year but the big two, Owens v Cena and Ambrose v Rollins, are only rematches because of the last minute addition of Elimination Chamber to the special event line-up. Had that not happened both of those matches would be much fresher. Brand new in the case of Owens v Cena.


The Money in the Bank ladder match itself helps too, of course. It's a match so busy that it almost always features something memorable as everyone tries to cram in some new, death-defying spot or insane bump. As it generally features many of WWE's top names, and is a key part of the show's appeal, the layout of the match and it's bigger spots get a lot of attention. Those same big names get people invested. As does the prize: a WWE world title shot anytime, anywhere during the following year. The briefcase has been built up so well over the last decade that winning it means something. People know that and react as though winning the briefcase means something. Because it does.


This year's show will feature two ladder matches, one for the title match-bestowing briefcase and one for the WWE world heavyweight championship. The latter will feature Seth Rollins defending against Dean Ambrose. It's come about because just over a week ago Ambrose pinned Rollins to win the WWE championship at the Elimination Chamber show, only to have the title cruelly snatched away from him after the match's original referee altered the decision and disqualified Rollins for assaulting him. Ambrose kept the win but lost the prize.


'The Lunatic Fringe' earned another shot at Rollins via some Steve Austin lite jiggery pokery the next evening on RAW. The match was given the ladder stip because Rollins and Ambrose haven't done one yet and it's the traditional WWE method of sorting out title disputes of above average complexity. Ambrose being in possession of the title belt while Rolins is recognised as champ qualifies as above average complexity by wrestling standards.


I'll say the same thing about this match as I do about every Rollins v Ambrose match: it will be really good because Ambrose and Rollins don't have bad matches against one another. I imagine they'll do some interesting stuff with the ladder gimmick, even though we've seen it so many times before that being genuinely innovative is nigh on impossible. I'll be very surprised if Rollins doesn't leave with the title. He has a rematch with Brock Lesnar waiting for him some time in the next few months. It could be a non-title match but I don't think it will be. We've also yet to see him defend the gold against Roman Reigns.


There's also the fact that nobody seems to know what to do with Dean Ambrose. He's immensely popular, despite being given little to do for months on end, but nobody seems to know where to slot him on the card in the long run. I can sympathise with this: I love a bit of fantasy booking but I haven't got a clue what to suggest for Ambrose beyond having him be the vaguely rebellious character he already is. The thing is that I'm not paid to come up with things for wrestlers to do and the writing team is. Right now I think the best we can hope for regarding Ambrose is a commitment to properly building towards either a Rollins v Reigns v Ambrose triple threat or a Shield reunion. Both will happen at some point but I don't think Ambrose will do anything meaningful beforehand.


In other title matches the Prime Time Players will challenge New Day for the tag team championship, Big Show will change Ryback for the Intercontinental championship, and Paige will challenge Nikki Bella for the Divas championship. Darren Young and Titus O'Neil were booked very strongly in the tag team Chamber match last month, designed to set them up as credible challengers here. I don't think they'll win but I do like the fact that WWE are finally doing something with them and offering a division that doesn't just consist of two teams feuding over the titles and a bunch of others having meaningless matches. This should be enjoyable (I'm particularly interested in a Big E v Titus stretch) with the PTPs losing following New Day shenanigans. It's the Lucha Dragons we should be looking at as the men who'll relieve Big E and co of the gold.


I have little interest in Big Show versus Ryback. Extreme Rules demonstrated that Show can participate in worthwhile matches when enough planning goes into them, but his opponent there was Reigns and I think there was a sense of urgency to elevate him that isn't felt with 'The Big Guy'. I expect Ryback to win but I don't think this match will do him the favours Reigns' match with 'The Giant' did.


The Divas title match is a peculiarity. Last month both women were faces. The night after Elimination Chamber Nikki and Brie switched places during Nikki's title defence against Paige, allowing the fresh Brie to get the win on her not-really-identical-anymore sister's behalf. That was a distinctly heelish move, odd considering Nikki had only officially become a face less than two months earlier. It's an example of how little thought goes into the main roster's women's division, as is the fact that we're getting the fourth Nikki and Paige meeting at a special event in the last six months.


I think we could be due a title change. That Michael Cole has been harping on about the length of her reign recently makes it seem as though they're positioning her (or trying to) as a dominant champion, the implication being that whoever defeats her for the title will have really achieved something. I could be wrong though. It could just as easily be a new trend that's going to continue throughout Nikki's record-setting title reign.


Speaking of big achievements, Money in the Bank will play host to a Cena v Owens rematch. They stole the show at Elimination Chamber. With two ladders matches on the this show it'll be harder for them to do that here. They'll also be hampered by raised expectations. As long as they hit the same blend of punch exchanges, big moves, and kick outs I'll be happy. It's not to everyone's tastes but it satisfies mine.


The right outcome (and it most certainly would be the right outcome) would be an Owens victory. It would make it clear that the newcomer has the veteran's number and that the outcome of their first meeting wasn't a fluke. Nothing about it would weaken Cena. It would take something far more drastic to lower his standing after his decade on top of the company than simply losing back-to-back matches to a (well-introduced) newcomer. It would boost Owens' standing. As he's the NXT champion it would probably do NXT some good too.


Sadly every Cena rivalry of the past tells us that Owens will lose. Just look at what happened with Rusev. Cena lost the first match in the series then went on to defeat 'The Bulgarian Brute' three shows in a row. Rusev, previously unpinned and unsubmitted, had his momentum crushed with his prolonged interaction with Cena. Owens has less momentum to lose, but a loss would still harm him. He'd become just another guy who lost to Cena after getting lucky one time. There's something to be said for feuds where one guy always wins. Cena desperately needs a feud like that like that. Handled right it could stretch for years, on and off, without ever becoming boring.


Finally there's the Money in the Bank ladder match. The official entrants right now are Randy Orton, Dolph Ziggler, Adrian Neville, Sheamus, Kane, Kofi Kingston and so-called 'Big Dog' Roman Reigns. Kane aside this is a nice blend of talent, mixing established names with guys who can make this sort of match work and guys who could make convincing winners. Orton can never be completely written off in a situation like this. Sheamus and Ziggler are both in a position where they could get a surprise win. Roman Reigns is the obvious favourite. That's half the guys in the match that could theoretically win. Two of the other three should do something memorable in the match.


I can't pick against Roman Reigns with this match. He's been getting The Push since the start of the year. The company held off on crowning him world champion at WrestleMania for fear of a harmful backlash from the hardcore crowd. Undeterred they continued building Reigns up with a better than it had any right to be match opposite Big Show at Extreme Rules and a strong showing in a four-way at Payback (in which it was Randy Orton who was booked to take the pin). It was too early for Reigns at 'Mania because WWE hadn't been making him look like a credible singles guy for long enough. That's no longer the case. Reigns is ready and the Money in the Bank briefcase is his route to the top.


Money in the Bank looks like an above average show, as usual. It should easily better the majority of WWE shows this year although it will have to be something special to be more enjoyable than the Elimination Chamber Network special. It has the potential to do it though, and I hope it does. Because done right Money in the Bank is one of the best wrestling concepts out there.