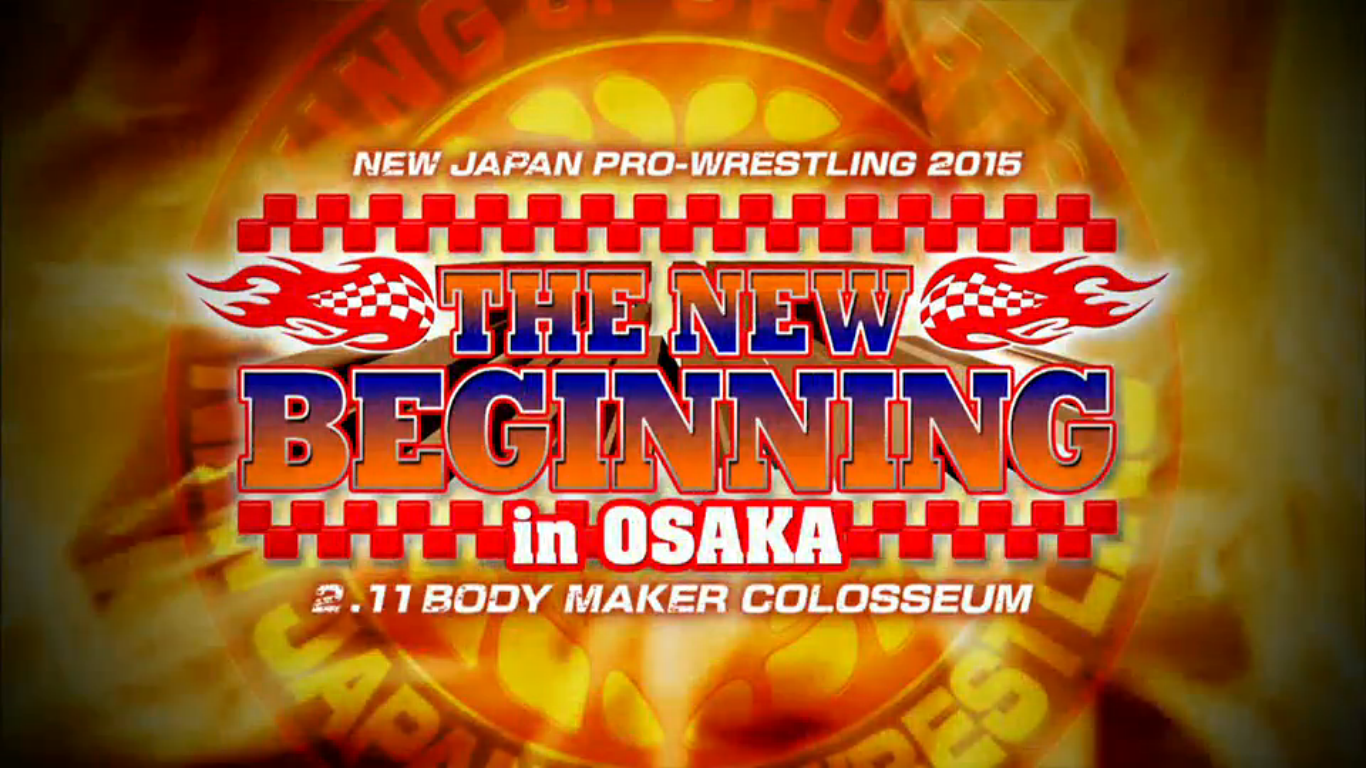 According to the ever reliable Wikipedia New Japan's New Beginning show is one that traditionally gets split across two nights. There are sound business reasons for doing this. If you're a popular wrestling company with a large and talented roster then it makes sense to split your larger shows across two nights in order to increase your profit. Why settle for batch of ticket sales, merch sales, and pay-per-view buys (or, as it is now, New Japan World subscriptions) when you can have two?

The downside of this is that the undercard across the shows suffers. Hiroshi Tanahashi and Shinsuke Nakamura both wrestled a main event and a six man tag match each. AJ Styles was absent from the second show in Sendai. Kazuchika Okada was relegated to tag team matches on both shows. One show could easily have supported the key singles matches we got across both shows.


But while this is a downside it's not a big one. The split show approach means more undercard material but that gives more guys a chance to perform in front of larger crowds and notch up an appearance on a major show. All told it's not a bad way to operate. But it can be a slog to watch if you're taking notes for a review.


The Osaka card opened with a pair of solid and entirely unspectacular matches. The first saw Sho Tanaka defeat Yohei Komatsu with a Boston crab. The second saw the team of Tiger Mask and Máscara Dorada defeat Manabu Nakanishi and Captain New Japan in what seemed to be NJPW's version of a comedy match. The most notable thing was Dorada's music, which was excellent.


Bruce Tharpe rocked up after that. He's a generic western manager who wears deliberately naff game show host jackets (the one he sported here was golden). He reminds me a lot o Greg 'The Truth' Lambert, a man who screams British indy scene. Fittingly Tharpe represents that powerhouse of 70s wrestling, the NWA. He introduced Chase Owens and NWA champ Rob Conway. They had a basic match with Jushin Liger and Hiroyoshi Tenzan, Owens getting the win for his team after a package piledriver on Liger.


Match four saw Kota Ibushi defeat Tomoaki Honma, getting a phoenix splash after weathering an onslaught of big moves. Ibushi had had the match of the night with Nakamura at Wrestle Kingdom 9. He didn't manage the same feat here but they did have the first above average outing of the night, Honma's strong man stylings being pitted against Ibushi's speed and acrobatics. Based on his performance here and at WK9 Ibushi  seems like the most sensible choice for the final spot in the company's Big Four. He's a great wrestler and the audience love him.


As good as that was the match that followed it was better yet: a three-way match for the IWGP junior tag team titles. reDRagon defended against Time Splitters and the Young Bucks. The Bucks had Bullet Club young boy Cody Hall with them at ringside, just because. As you'd expect it was a match heavy on high spots. Highlights included a lengthy sequence of flashy double team work by Kushida and Shelley at the start; a kip up combined with a German suplex by reDRagon on Kushida; a sequence where Alex Shelley took out all four of his opponents with a superb series of flips and kicks on, around and from the apron; a Kushida moonsault on O'Reilly turned into an armbar; a Swanton bomb by Nick onto a kneeling Shelley; the always cool-looking (and psychology-killing) Indy-Taker; and a match-winning More Bang For Your Buck on Kushida. Cody Hall was a non-factor at ringside, doing nothing but cheer his stablemates on.


After an intermission showing highlights of the card so far, analysing what was left to come and hyping future events the Bucks and Hall returned to the ring (Hall now sporting a sexy little hat) with IWGP junior heavyweight champ Kenny Omega. He'd won the title from Ryusuke Taguchi at Wrestle Kingdom 9. This was the former champion's rematch. It didn't work out well for him. The Jacksons interfered and he was mildly sodomised by a flagpole. He was able to get hold of the pole and turn the tables on the heels just as any babyface worth his salt would but there was little he could do about the three men at ringside. Omega would win a match that was enjoyable but a surprisingly slow at points with Aoi Shoudou, a fisherman buster.


The Bucks and Omega gave Taguchi a triple team Tombstone piledriver onto a chair after the match, just to be heels. Máscara Dorada and Alex Shelley rocked up after that with Dorada getting in Omega's face. Then he made the belt-around-the-waist gesture making it crystal clear that he would be Omega's next challenger.

The semi-main event spot was taken by a tag team championship match. Bullet Club members Doc Gallows and Karl Anderson got their rematch against Meiyu Tag, who'd defeated them for the straps at Wrestle Kingdom. It was an intense, action-packed match. The crowd were massively into it. Goto and Shibata have entered spirited performances both times I've seen them tag and Gallows and Anderson work really well as a pairing, even if Gallows' selling does occasionally veer into cartoon territory. The Bullet boys regained the gold with an elevated neck breaker.


That left only the main event. It was preceded by a great video showing the history of Styles and Tanahashi as opponents and a short sequence of shots showing former IWGP heavyweight champions. That was a really nice touch. It's always nice to see Bob Sapp getting some attention.


In a way the match resembled a Raven match from 1996. It started off with Cody Hall, Gallows, Anderson, the Buks, Omega, Takahashi and Tama Tonga all at ringside. Fale would wander out after the finish to round things out. To be fair the large ringside entourage gimmick is one of the key aspects of Bullet Club so I'm not complaining.


Tanahashi got the better of Styles in their opening exchanges, controlling the pace with various wear down holds and avoiding many of Styles' moves. Things picked up several minutes in when AJ left the ring and Tanahashi followed him out with a dive from the apron. Styles avoided it and Bullet Club set upon him as he lay sprawled at ringside. When Captain New Japan tried to help his buddy he got set upon too.


Styles took control back in the ring and worked over Tana's back.  Thirteen minutes into the match Tana made his comeback, blasting the challenger with right hands and a back drop before coming off the second rope with a senton. Sensing a shift in momentum Styles again tried taking the action outside. Tana fought off the Bucks, threw Styles into his gang and hit what the commentary called a super High Fly Flow onto all of Bullet Club. When he returned to his feet Tana was bleeding. Those top rope moves really take their toll on the forehead.


Back in the ring (again) they did a double clothesline spot. Tanahashi was the first to his feet. He charged Styles but got caught with a kick, suplexed into a corner, then smashed with a springboard elbow. Styles attempted Bloody Sunday but Tana deadweighted and span him around into a straight jacket German suplex for a two count. Styles absorbed a German suplex but fought out of a second by distracting the referee and low blowing Tanahashi. He got his just desserts seconds later when Tana repaid him in kind as the ref was distracted by Takahashi, who'd leapt onto the apron to celebrate 'The Phenomenal One's' cheating ways.


Back on their feet the two man traded elbow strikes before Styles went for the Styles Clash (which was referred to as the Styles Crush in the pre-match video). Tana escaped and grabbed Styles' leg, dragon screwing him as he tried for an enziguri. He put the challenger down with a sling blade and went for the High Fly Flow but was met with knees, winding him and leaving him motionless in the ring. Styles took the opportunity to attempt a springboard 450 splash but Tana again repaid him in kind by getting his knees up.


Another HFF was thwarted when Styles hit the ropes. 'The Ace of the Universe' caught Styles as he went for a hurricanrana but couldn't avoid a Pele kick seconds later. That was enough to daze the champion, allowing AJ to pull him off the top rope and into position for a Styles Clash (or Crush, whatever). Tana fought out twice so Styles dropped him with a hangman driver, following up with a high Bloody Sunday and a Styles Clash to earn his second IWGP heavyweight championship. Despite having practically all of Bullet Club at ringside the finish was clean. The only interference came from Takahashi. Styles was not made to look dependent on his entourage for his victory.


Anderson then spent several minutes talking up every member of Bullet Club and the fact that the stable had regained all the company's gold bar the NEVER championship. It was meant to be a bragging heel promo but the fans were so respectful that they applauded the group's success. It probably didn't help that Anderson was speaking in English and couldn't be understood by most of the crowd.


All told the first New Beginning show of 2015 was a strong offering. Ibushi v Honma, the tag title matches, and the main event were all strong offerings and everything outside of the opening three bouts was better than the average match you'll find in certain prominent US promotions. Another win for New Japan.