At the most recent ROH TV tapings Nigel McGuinness told Jay Lethal that the only way he’d be awarded a match for the ROH world title was if reigning champion Kevin Steen agreed. Lethal had been banned from competing for the ROH title while Steen has the belt due to an excessive display of aggression at last year’s Lethal Instinct show. Later on at the tapings Lethal convinced ‘Wrestling’s Worst Nightmare’ to overturn the decision and grant him a match.


As things stand right now Steen versus Lethal for the ROH world championship will take place “sometime in the near future”. Which probably means at the 11th Anniversary Show on March 2nd.


It’s too early to tell whether or not Lethal will come through on the night and, in his mind, restore honour to ROH. This is a good opportunity to create some new headline stars and mix up the top of the card a little, something that many fans have been calling for for a long time now.


Have Lethal beat Steen at the Anniversary Show. It doesn’t have to be a clean victory. In fact it would be better if it were a tainted win for Lethal. That would make him look more desperate as well as revealing his claims to be an honourable man for the lies they are.


It would also allow ‘Mr Wrestling’ to be written off of ROH TV for a couple of months. His character is still incredibly popular but I’m beginning to think a sabbatical would do him some good, dissuading fans from turning on him as they have with other heavily pushed acts in the promotion’s history. It wouldn’t need a storyline explanation, plenty of men have taken a leave of absence after dropping the belt (usually to participate in a lengthy foreign tour that was a contributing factor to them losing their prize in the first place).


From there ROH should immediately begin preparing a new champion. Lethal doesn’t strike me as a long term option for the role and with the last two champions having enjoyed lengthy reigns it’s time for at least one relatively short one.


This approach would allow the company to promote all the big name opponents for Lethal as champion immediately, rather than trying to hold them off so that he has something to do later in his reign. Lethal could tangle with Richards, Edwards, Strong, and Homicide in rapid succession across TV and house shows, taking in his obligatory rematch with Steen along the way. 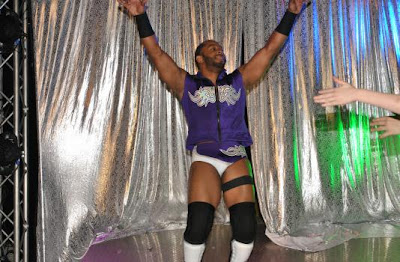 Put your hands in the air and wave 'em like you just don't care
You may have noticed Michael Elgin’s name is conspicuous by its absence from that list. The long-winded answer for this is available here. The short reason is that I think if Elgin loses another world title match in ROH then it will be practically impossible to establish him as the dominant headline force he deserved to be last year.


Lethal’s short reign could (and should) be ended by someone unexpected. The perfect choice is Kyle O’Reilly. He’s more than a good enough wrestler to carry the belt and it would add something to his programme with Davey Richards and Eddie Edwards. Have the title switch occur on a house show and it could be presented as an even bigger shock. It’s a move that would fit snugly into the gap between Supercard of Honor VII and Best in the World in June.


O’Reilly as champion would allow for Davey Richards to have a memorable final match in August should he remain serious about leaving the group (which I think he will). He could tangle with the same names suggested above for Lethal but spaced out a little more so as to help his reign last longer. Numerous undercard performers could realistically challenge O’Reilly too. His status as a “shock champion” would make it uncertain as to where ROH were going with his reign, bringing a desirable air of unpredictability to the group.


There would be two other men on the roster who would benefit from an O’Reilly title victory. Adam Cole and Michael Elgin. Cole and O’Reilly are former tag team partners with a well-established rivalry with one another. Both men having singles would add an interesting layer to this, and also create a “whose title is better?” scenario where both men try to make their title mean more by outdoing each other on shows.


‘Unbreakable’ would benefit because he has been shown to have O’Reilly’s number on a couple of occasions. He could be built up throughout the second half of the year as the natural successor to O’Reilly, the man the champion doesn’t really want to face. Keep them apart until Final Battle 2013 and have Elgin walk out as champion, heading into 2014 as the most unstoppable force in the company, with Cole and O’Reilly in supporting roles to help bring up the next batch of talent.
Posted by Dave at 23:13