This year's show is still a few weeks away. It's been announced that The Rock will challenge CM Punk for the WWE championship on the show. No WHC bout has been announced as yet. Nothing about the current storylines revolving around SmackDown's premier prize indicates that 'The Show Off' will be involved in the match though. It's currently looking as though Alberto Del Rio (or perhaps Ricardo Rodriguez) will get the nod.

Which is a great shame. Had Ziggler been prepped for another crack at a world title the angle of his two previous attempts on the show ending in failure could have been played up. WWE doesn't make the most of these situations anywhere near often enough. It's arguable that the only statistic they've ever truly capitalised on to its maximum potential is the Undertaker's Streak.

Not that I'm saying giving Ziggler a world title shot at the Rumble for a third straight year could have been as lucrative as 'The Dead Man's' 'Mania record but it could have been intriguing. Wrestling is, to all intents and purposes, a sport. Yes it's predetermined but that doesn't prevent those in charge from capitalising on situations and circumstances when they crop up. In fact wrestling's predetermined nature should mean we see stories like this more often.

Staying with the theme of The Streak for a moment, cast your mind back to Shawn Michaels' back-to-back failures against 'Taker. Yes The Streak was the reason that story could be presented in the first place, but the rematch wasn't just about 'Taker's statistics or HBK's career, it played into stories that had been kept bubbling across the year as well as ‘The Showstopper’s’ failure to get the job done once before. Michaels had to goad Undertaker into facing him by costing him a championship, agreeing to put his career on the line to get what he wanted. It was as much about Michaels and Undertaker’s rematch as it was The Streak as a whole. 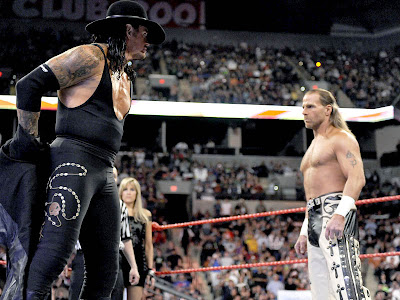 Ziggler getting a title match at the Rumble for the third year in a row may seem a world removed from this but that's only because it's so unlike the current WWE booking approach. It's easy to imagine 'The Heel' interrupting a promo between Show and ADR in order to make himself eligible for a championship match. It's not so easy to imagine him referring to his past defeats at the event and the announcers playing it up.

The situation could still be capitalised on though. Should Ziggler cash-in his Money in the Bank briefcase on the victor of the World strap match and leave as the new champion then it could be mentioned that he failed in 2011 and 2012 but succeeded in 2013 despite not having a match scheduled. It would be making use of the past in a different way but still making use of it.

Sadly that's not something WWE are interested in. That's a shame on two levels. Firstly because it’s an approach that could improve WWE's storylines by providing a different area to place emphasis in storylines without amending the sports entertainment approach. Secondly because WWE has a rich history, both short and long term, that would offer a wealth of plots.

The same old approach makes money though. And ultimately that's all that matters.
Posted by Dave at 15:33