Over the last several months we’ve seen more time devoted to the middle of the card in WWE. This used to be one of the promotion’s most reliable areas but as the number of established headliners has dwindled so has the group’s willingness to dedicate time to anyone not a member of the elite. Which has, of course, only made the situation worse: main event stars aren’t made overnight, a thriving mid-card is key to making the stars of tomorrow.


I’m not sure what it is that’s convinced WWE to change their tack. A strong possibility is Triple H’s ascension to Official Number Two. With ‘The Game’ having gained more clout backstage it’s possible this refocus is down to him. His successful reshuffle of the developmental system certainly hints at his involvement.


It could be that WWE are happy with how CM Punk has progressed over the last year and a half. In June 2011 he was a reliable upper mid-card talent. In January 2013 he is the promotion’s number two (regular) star behind John Cena. That’s a decent leap in an impressive amount of time. It happened because of Punk’s hard work and WWE’s decision to give him the chance to prove he could succeed. Perhaps his rise has made them think about other wrestlers making a similar move up the card.


It could simply be that a breaking point was reached and head honcho Vince McMahon realised he needed to create some new stars before a bad situation becomes worse and that paying attention to the lower reaches of the card was the best way of doing that. Cena and Punk are still on TV every Monday night, and The Rock’s with the company on a part time basis. Best to start building up new stars now while people are still watching rather than waiting until Cena and Punk go part time and ‘The Great One’ leaves for good, further denting the viewing numbers.


Whatever has caused WWE to re-evaluate the way they book their mid-card acts I’m pleased they have. It’s been needed for a long time and is crucial to the future success of the promotion and the business in general.


Current beneficiaries of this reshuffle are Wade Barrett, Antonio Cesaro, Damien Sandow, Cody Rhodes, and, of course, Ryback. Each man has, to a greater or lesser extent, has found themselves receiving an increased number of high profile matches and opportunities to impress over the last six months.


Until recently Kofi Kingston was on that list too. For whatever reason I don’t think he can be considered a prominent member of the rising star club anymore. Since dropping the Intercontinental championship clean to Barrett at the Boxing Day RAW recording he has failed to gain any meaningful screen time. Based on the last couple of weeks I think ‘The Wildcat’, who had seemed like he was being treated as something special last autumn, is going to be playing a supporting part for the foreseeable future.


He won’t be the only one. WWE are apparently keen on bringing back several career mid-carders from the past to help the current batch of climbers improve and hone their skills. The rehirees apparently won’t be getting strong pushes of their own, they’ll be there to enhance and guide.


As ideas go it’s not a bad one. Rumoured names such as Shelton Benjamin, Carlito, and MVP would all be perfect for the stated role. All of them have strengths that could be transferred to the likes of Ryback. They’d be like a more active, more televisually prominent crew of road agents. With Shelton and Carlito having been spotted in Phoenix over the last few days there’s a strong chance they’ll make their returns as “surprise” entrants in this evening’s Royal Rumble. 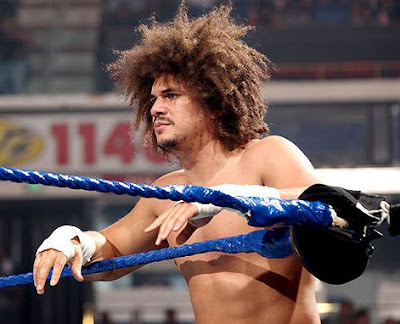 Judging by his hair Carlito's been sleeping rough since leaving WWE
In addition to those three guys it would be nice to see names like John Morrison, Colt Cabana, Brian Kendrick and Paul London considered too. All could help brighten up the middle of the card. If treated right, and if WWE were willing, these men could stumble into pushes of their own too. It’s hard to see how them getting over and making WWE some money would be bad.


Although, of course, it would be. WWE is very particular about who is awarded pushes these days. This initiative seems to be a way of creating a new level of enhancement talent. The planned rehires likely wouldn’t be getting jobbed out every week but equally it doesn’t sound as though they’d be getting serious pushes. Anyone getting over could be seen as not performing the job they were hired to do: namely to help others gets over.


It’s a double edged sword for anyone heading back to WWE to be a part of this plan. They most likely got into wrestling to make it to WWE and become a significant part of the company. Should they quash their own dreams to get a decent paycheque and help other guys who are perhaps more limited surpass them? That sounds like a bitter pill to swallow.


Hopefully the likes of Shelton Benjamin, who currently seems like the frontrunner to head back to WWE having negotiated his way out of his ROH contract, know what they’re in for and are willing to temper their own abilities in order to aid others. If WWE gives the returning men a little leeway to earn higher spots on the roster this could be just what’s needed to reinvigorate the mid-card and create some new stars, whether they’re chosen ones or not.
Posted by Dave at 16:17