Why does everybody rate Chris Jericho so highly? This is a question that's been puzzling me for a while and it's finally reached the point where I feel I have to write about as an attempt at sort of catharsis on the topic.

I imagine I'm going to need to start by giving my reasons for feeling that 'Y2J' being overrated. I wish it were enough for me to say he just is, but I don't think that'll cut it. Which is fair enough.

So, if you're a Jericho fan, ask yourself when he last had a great match. And I don't mean a decent match or the best outing on any given TV show or pay-per-view, I mean an undeniable classic that people will look back on in years to come and agree that it's as close to a perfect match as you can get.


Don't point to his feud with Punk last year. That was dismal. His programme with Dolph Ziggler later in the year was better but that yielded no outstanding bouts either. In fact I'd say the best in-ring performance Jericho had last year was the four-way at Over The Limit. Even that, while enjoyable, isn't going to be looked back at in five years as anything special.

I imagine anyone trying to name Jericho's last great match will bring up his programmes with the likes of Edge, Randy Orton, Batista and Shawn Michaels. Of those I think only the rivalry with 'HBK' provided anything that could be accurately described as excellent. They had memorable matches at Judgment Day and The Great American Bash and a particularly wild brawl at Unforgiven. All in 2008.
The truth is that most of the time Jericho's matches are let down by an astounding number of botched and blown spots, generally poor timing, and attempts to cram far too much in. These are not the traits of one of the best wrestlers ever.

This is not to say Jericho is not good. He is good. But the amount of praise and adulation he gets is disproportionate to what he actually does as a performer. Things go wrong in matches from time to time. It happens to every wrestler, no matter how good or over they are. But the frequency with which it happens to Jericho indicates a problem specific to him. You don't see Undertaker, Triple H or Kane, men with similar numbers of years in the business, botching as often or as obviously as 'The Highlight of the Night'.

Look at his recent outing against Ryback and Rob Van Dam from Money in the Bank and the following evening’s RAW. There were numerous blown spots there. You can go back to earlier this year and see ‘The Ayatollah of Rock-and-Rollah’ loudly calling spots and entering sloppy performance against Fandango. 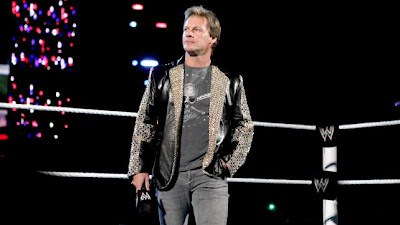 I will say this for Jericho, the dude's got a nice line in sparkly jackets
I think another part of the reason I find Jericho's lauded status amongst fans irksome is that he seems to agree with it. He really does believe himself to be one of the greatest wrestlers ever. I admit this is a contentious topic, but you have to pick some very specific criteria for Jericho to be rated as one of the best wrestlers there have ever been.
He's a better in-ring performer than big names like Hogan, Cena, and even to an extent Austin but that doesn't necessarily make him superior as an all-rounder. Those three were and are all far bigger draws than Jericho, which indicates there was something about them that set them above 'The King of Bling Bling'. Austin and Cena are arguably better than Jericho on promos too, and Hogan in his prime and during his nWo run wasn’t that far behind.

Yes. Promos. This is the other area where Jericho's overrated. He's far more consistent with a mic in his hand than with his wrestling boots on (perhaps it's all that singing he does) but he's far from perfect. Look back to that episode of RAW a few months ago where he loudly called spots to Fandango into a microphone that Fandango was holding. It was ridiculous. That's an unfairly obvious example, but you don't have to go far to unearth instances of Jericho audibly calling spots during matches.


It’s been a while since Jericho cut a truly great promo. His run from mid-2008 to mid-2010 was pretty good. He did a great job of slowing his delivery down and putting some thought into getting people to react how he wanted. But he’s lost his knack since returning in January 2012. No matter what role he’s playing Jericho now relies on boring catchphrases and uninspired clichés.

A man of with experience should know better than this. The frequent botches, loud calls, and utter lack of humility are not the hallmarks of an all-time great. They are, in my opinion, the hallmarks of a pretty good but sloppy worker who feels he needs to propagate the myth that he's fantastic in order to stand any chance if being considered as great as he feels he is.

Again, he is good, but not as good as he's credited for being. If he wasn't a twenty year pro with name value left over from the Attitude Era I don't think he'd be anywhere near as highly regarded as he is.