You may remember that in late 2011 and early 2012 there was a lot of talk that Sting was going to leave his well-paid, part time gig in TNA and finally make the move to WWE. A lot of people were very keen on the idea of him wrestling the Undertaker at WrestleMania. I didn't particularly care for the idea, never having been much of a Sting fan. 'The Stinger' ended up staying with TNA, leaving 'Taker to have a rematch with Triple H at ‘Mania XXVIII. That match was pretty highly regarded, so it all worked out for the best in the end.


It's been a year and a half but those Sting rumours have started up again. They've cropped up periodically pretty much since he first appeared for TNA, like those singles pushes Billy Gunn used to get every nine months or so. Anyone who's followed wrestling online for a significant amount of time will by now be used to reading about Sting's latest alleged reasons for fancying a jaunt to McMahon country.


As irritating as the rumours are they get addressed because Sting is one of TNA's biggest stars and the only major name from WCW not to appear for WWE since that company went under and was sold in 2001. To some people out there that means a great deal.


In early 2012 the rumour had credence because it could have seen Sting wrestle a dream match against 'The Phenom' in WCW's former stronghold of Atlanta. If nothing else I think that could have created a fantastic atmosphere: the WCW stalwart trying to end The Streak could have successfully split the crowd. This time it has credence because TNA is in clear financial trouble and need to save cash. They could (and probably should) be encouraging Sting to make the move to save themselves money.


For WWE's part the appeal of Sting is obvious. He's the only major name of the last twenty years that they've not had work for them. He'd have fresh matches waiting for him against practically the entire roster, including first time meetings with all of the company's major stars. Sting's drawing power is not what it was at his peak in the late nineties but he could still help to encourage a significant improvement for WWE's host of B level pay-per-views.


There's also quite possibly an element of ego involved. Vince McMahon is the kind of macho character who would see signing Sting as a victory. It could be taken as the last WCW holdout finally being made to cave at the promise of the McMahon millions. Vince would probably have a good smirk about Sting signing after years of claiming to be "perfectly happy" in TNA too.


Personally I don't really care if Sting goes to WWE. He's one of the most average men to ever establish themselves as a main event performer. Average in the ring, average on the mic. There's nothing about him or his character that excites me. I'd be interested to see what WWE would get him to do and how long it would take Cena to beat him but there's nothing about the scenario that makes me desperate to see it play out. I wouldn't feel cheated if Sting announced his retirement tomorrow and never wrestled again. 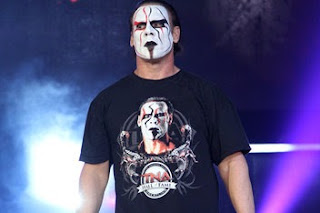 You all know Cena would beat him
For Sting's part a move to WWE would allow him to experience some larger crowds again and get the send-off from wrestling that he deserves: the HOF induction and WrestleMania retirement match package. At fifty-four how he ends his career has got to be something that's on his mind. As fond as he is of TNA and as much as he professes to question WWE's business ethics there's no way TNA could give him half the send-off WWE could.


I think Sting leaving TNA would be best for all involved. He's faced everyone of significance multiple times. He's won five world championships. He was the inaugural inductee to TNA's ill-judged Hall of Fame. He's done everything he can in his ten years there. That he's currently embroiled in a story about reforming the Main Event Mafia (a decent concept that was bungled enough the first time around (WCW's Millionaire's Club, remember them?) to make me never want to see it used again) says all you need to know about what TNA has for Sting to do. More world title reigns? No. They went out of their way to introduce a stipulation about Sting never challenging for the belt again. The TNA championship is not in his future.


TNA would save money that could be better spent elsewhere if Sting left. At a time when they're cutting talent who could be of use I think they need to have a serious think about why they'd want to keep on a fifty-four year old who's been present since 2003.
Posted by Dave at 19:55