Tonight RAW will play host to the eagerly anticipated debut of Bray Wyatt and his family. Not since CM Punk debuted on WWE’s ECW show in 2006 (seven years already? Yikes!) has the video package approach generated this level of excitement been attached to someone being called up from a WWE developmental territory. Not that I can think of anyway.


Obviously this is a very good sign for Wyatt. Wrestling fans these days only tend to get excited about the latest indy star getting called up from NXT. It’s rare for anyone who’s not made their name in companies like Ring of Honor and Dragon Gate to generate anything above a perfunctory level of buzz. That more people are talking about his call-up than they were about Antonio Cesaro’s last year shows that his rebranding has worked well.


Yeah, rebranding. That’s exactly what it’s been. Two years ago he was Husky Harris. I always quite liked that name but it was never going to get the man whose real name is Windham Rotunda to the main event.


The man has done a cracking job reinventing himself and revealed a knack for odd and peculiar promos. His natural charisma didn’t show when he was playing CM Punk’s heavy in the New Nexus but it’s shone through since he became Bray. 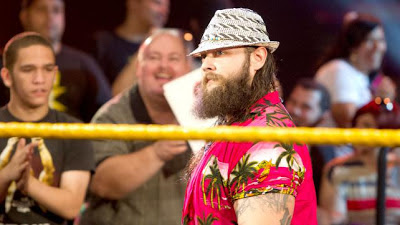 He's coming...
It’s impossible to know what Bray, along with Erick Rowan and Luke Harper, will do on RAW tonight. Presumably they’ll target someone. That’s the standard operating procedure for any debuting faction. There’s no obvious person or persons for them to target. There are simply no good guys on the roster that are sufficiently over to make a good introductory feud for the likes of the Wyatt Family.


That’s assuming they come in as bad guys. While their vignettes have been creepy and strange they haven’t actually been portrayed as clear villains. It’s possible the trio will arrive on RAW to face off with The Shield. That could be interesting, but it’s not likely. The Shield are currently being kept warm for a SummerSlam match against Kane and The Undertaker.


I wouldn’t be surprised if the Wyatt Family were used as tweeners. Their build to the introduction has been so well produced that WWE could do anything they want with them right now. The faction has captured fans’ imaginations. That’s not a bad spot for newcomers to be in.
Posted by Dave at 20:33