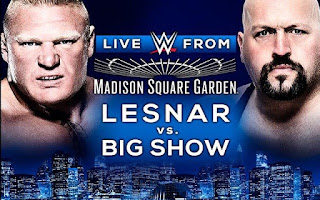 This was not a pay-per-view. It was a Network special. That was an important distinction to remember watching this event because the standard of WWE PPVs is generally pretty high while the previous two Network exclusive cards had been rejigged house shows with a camera crew and a production budget. By now it's clear that Network shows are not going to be of a pay-per-view standard. It you expected a lot from this show you were always going to be disappointed. But was it good on its own level? Let's find out...


After a brief opening video package focusing on the Cena v Rollins cage match and Big Show v Lesnar we were introduced to the show by Rich Brennan, JBL and Byron Saxton. JBL has lost his edge and Byron is irritating but Brennan is good and warrants more chances to call bigger shows like this. It's cool to see a bit of experimentation with the commentary lineups even if two of the guys have their drawbacks. Announcing is probably one of the most stale parts of the product.

The opening match was Rusev and Sheamus versus Dolph Ziggler and Randy Orton. That Orty was on curtain jerk duty demonstrates that he has virtually nothing going on right now. This was a holdover from his rivalry with Sheamus which ended a while ago. There was no reason for it to be revived here beyond a mentality of "Welp, let's stick Orton on the spesh!"It was also strange that this was the first broadcast match in which Rusev and Orton faced each other because that's a singles pairing that could have been saved and built up. They could have done it here. The venue was ideal and it would have made Network specials seem more worthwhile, even if the match had ended up relatively basic.

The four ran through standard house show stuff, something which would be a theme throughout the evening. The faces larked about because they're Great Mates (or something) while the heels glowered. Shaymo and Rusev controlled most of the match before a hot tag was made, ultimately leading to the finish. The Show Off Vipers won when Orton sidestepped a brogue kick and Ziggler super kicked 'The Celtic Warrior' into an RKO.

After the match Rusev called Sheamus a "stupid non-American" (implying Rusev's hate campaign now includes both Americans and non-Americans, truly a vast scope) and berated him for being stupid, losing the bout, and being more useless than Lana. Sheamus Brogued him and sauntered to the back. The purpose of this was lost on me. They're not going to do Rusev v Sheamus. They're not going to turn either man face. It was just a way of killing a little bit of time.

Next was a recap. We were shown Rollins Pedigreeing Kane on RAW and the whole multiple personality thing that's going on with the COO pretending his unaware of his antics as 'The Demon'. Then Renee caught up with him in the back. He teased being out of control but ultimately assured Renee that if the demon that's been terrorising Seth appeared he'd come running. This isn't the best feud for Rollins or the best spot for Kane in 2015 but Kane is great with the material he's being given. He's one of WWE's better wrestlers at handling comedy segments.

Match two was Stardust v Neville. It was a fun match but there was nothing exceptional on offer. It was the quality of a standard TV match between the two. Neville won with the Red Arrow. I was disappointed we didn't get to see the Cosmic Wasteland out in full force, either as backup for 'The Prince of Dark Matter' or as part of a trios match.

Renee Young got more screen time after that when she chatted to Paul Heyman. He taught her how to do hyperbole, introducing himself and the show, building up MSG and dropping an uncharacteristic sports team mention. He ended by telling Big Show he'd be losing to Barack Lesnar. It was standard Heyman. Not that that's a bad thing.

Team Bella got a loud pop when they entered for their six woman tag match, actually louder than the ones Paige, Becky lynch and Charlotte got for their individual entrances. This illustrates that for all certain people hate on them the Bellas are genuinely popular with the majority of WWE crowds. That's overlooked too often. Their popularity is why the Bellas are so valuable to the company and they haven't been quietly de-pushed in favour of the new batch of call-ups.

The story of the match was that Team Bella had better teamwork than Team PCB because they all get on, although this came as much from commentary as it did from anything anyone did in the majority of the match. Aside from Paige showing some generally snarky body language and tagging herself in on Charlotte PCB got on fine. The Bellas and Fox managed to control the match less because of problems on the opposing team and more because they were simply better and outwrestled their opponents. This sort of booking will only help those face reactions. It makes Nikki, Brie and Alicia look competent, and modern audiences like competent wrestlers.

Dissension did play a part in the finish. Paige had tagged herself in and been worked over for a while. She finally managed to break away to make a tag only for Charlotte and Becky to jump to the floor. A shocked Paige was left alone to eat a Rack Attack from Nikki, putting her down for three. After the match Paige said she'd never behave like that and that she couldn't forgive their behaviour. This made sense for the PCB characters and long term stories it's just a pity it was all tied together with an average match.

Chris Jericho cut a promo about his twenty-five years in the business and pointed out Lance Storm before his IC championship bout with Kevin Owens. He pandered to the crowd by chatting about his dad playing hockey at MSG and pointing out more friends in the crowd (including one of my faves, Don 'Cyrus' Callis) and running through his catchphrases. The audience responded well to this but it didn't put them off KO. They were always going to pop for the former NXT champ.

This was the best thing I've seen involving 'Y2J' in I don't know how long. I'm chalking that up to Owens, a guy whose character and ring work I enjoy, because 'Y2J' did nothing outside of his usual "embarrassing dad" routine. Y'know, the same moves and mannerisms he's been doing for years. The match was lacking  in big moves from KO but that was okay, it played into his character: he got a cheap win raking Jericho's eyes and rolling him up as he tried for the Walls of Jericho. Then he left shouting "Happy anniversary!"

The first truly great moment of the night was New Day's pre-match promo on the Dudleys. They danced, the mocked the Dudleys' routine, and Xavier played the trombone. I'd recommend watching this skit and the last two matches from this show.

Sadly the match that followed couldn't equal that greatness. It was good, maybe slightly better than their clash at Night of Champions, but it was let down by another disqualification finish. The Dudleys caught Kofi with a 3D (outta nowhere) and Xavier, not legally in the match for his team, broke the pin up to save the belts. As with NOC New Day grabbed a table after the match only for Bubba and Devon to make a miraculous comeback and put Xavier through it with another 3D.

I understand the logic here. The Dudleys are chasing the belts and keep getting denied them by the rotten, cheating bad guys, which will eventually lead them to issuing the challenge for a tables match. But the specifics are uninventive. They could at least have come up with a different sequence to end on. Network specials may be treated internally as house shows but if we're expected to take it as a reason to subscribe (or stay subscribed) to the Network it needs to present us with more than reruns. DQ finishes aren't really the problem, the repetitiveness of them is.


Big Show and Brock Lesnar took the semi-main event slot. They deviated from the Lesnar format established over the last few years with Show fending off the clotheslines, double leg takedowns, and suplex attempts thrown at him and dropping 'The Pain' with three choke slams. Lesnar would kick out and comeback with four suplexes and an F5 to win a four minute match. No, it wasn't exactly Show trouncing Lesnar and Lesnar getting a fluke win but Show got a lot more on offence in than I'd expected him to. 'The World's Largest Athlete' let tone giants everywhere down. Andre watched on from the big ring in the sky shaking his head sadly.
After the match Lesnar left then returned to give Show a belly-to-belly and an F5. Because there's time that needs filling on that there Network.

After some ads and a reminder of the two previous PPV encounters in their feud, including Jon Stewart's (who was in the front row) interference at SummerSlam, the cage lowered and we got the main event: United States champion John Cena defending against world champion Seth Rollins. In terms of match quality nothing else on this show came close to this, not that that's saying a great deal. They traded escape attempts, top rope moves, near falls (for the record I hate pinfalls and submissions being a thing in cage matches, but at least these guys made good use of them), an amusing but brief top-of-the-cage boo-yay, and signature and finisher attempts before Kane wandered out and scared Rollins back into the cage just as he was about to escape and regain the US title. Rollins dithered between leaping down and getting the title, leaving himself prone to an attack from Kane, and returning to the ring to defeat Cena honourably, something against his standard behaviour. 'The Future' chose the latter, leaping off the cage with a frog splash. Cena rolled out of the way and immediately scooped Seth up for an AA. That was enough to earn Big Match John a three count. Arguments could be made that this weakened the WWE champ but I'd disagree. He fell to an established match-winning finisher from a top guy after throwing himself to the mat from ten feet in the air.

After the match Kane got into the ring and choke slammed and Tombstoned the WWE champion. The show closed with 'The Demon' dropping the title belt on Rollins and leaving. Because, hey, there are rivalries to keep heated here for the more important shows, okay?

Taken as the glorified house show from a major arena that it was this special was fine. The main event was good and Lesnar v Show provided what it needed to and surprised us as it did so. Everything else would have fitted in on an episode of RAW but this was at least shorter.