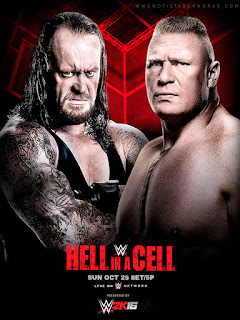 Last month's WWE pay-per-view was called Night of Champions. Judging by the card we have here this month's could easily be marketed as Night of Rematches (holds for laughter, gets silence). All but one of these matches is something we've seen before in one form or another. While rematches are a part of wrestling and some shows are going to be heavier on them than others this seems a particularly bad instance of RematchMania.


Ryback v Kevin Owens and Charlotte v Nikki Bella are both straight-up rematches from Night of Champions. On that show Owens and Charlotte defeated their foes for the Intercontinental and Divas championships respectively. Both matches should be good but I can't see any reason we should expect a title change. The new champions would only be weakened by dropping the gold so soon after winning it.


Despite these fun little conspiracy theories floating around about there being a cabal of influential people within WWE desperate to bring about Owens' downfall (hey, there's a Reality Era storyline waiting to happen) I don't think it will manifest itself (not that I think it's true) in a loss for him here. Meanwhile Charlotte seems to be the chosen one for the new look Divas division. She'll hold onto the strap to work that defence that's so clearly been set up against Paige. In fact I wouldn't be at all surprised if something happened to further that programme here.


An even more chronic rematch example is New Day versus the Dudley Boyz. The two teams didn't just face off at Night of Champions, they also clashed at the MSG special. Annoyingly it was the same combo of New Day wrestlers each time (Kofi Kingston and Big E). Had they been permitted to switch in Xavier Woods we would have one fresh combination to run through here before the inevitable table match stip gets wheeled out.


I expect New Day to win here. They won't lose the titles until that tables match happens. That is the natural time for Bubba and Devon to get their much ballyhooed tenth (WWE) tag title win. Hopefully we get an altered finish here though. I don't want to sit through the NOC and MSG bout for a third time.


Reigns versus Wyatt is yet another rematch although it does have the fact that we've never seen the pair in a Hell in a Cell match going in its favour. Last month I incorrectly predicted a win for Roman in his tag match because I assumed that would be the end of the feud. I foolishly didn't think to consult my WWE PPV calendar before writing that. Had I done I'd have remembered HIAC was coming and would have known that Wyatt v Reigns was the obvious match to go with.


I expect this match to be good. Reigns hasn't had a bad pay-per-view match this year. He's had a couple with dull portions though and while one of those came against 'The Eater of Worlds' (at Battleground, Wyatt won) I think the cage gimmick here, not to mention interference from the Family (they're fenced out but that won' sop 'em), will be enough for them to keep viewers engrossed for the duration. I'm interested in the layout of this match because Reigns matches have been getting a tonne of attention from creative since 'Mania and it's his first Cell match, a big deal in WWE. Plus, y'know, make look strong and all that.


There's the US Open Challenge tarring John Cena too. While we don't know who'll answer that the chances are that it will be someone who we've seen face Cena before, because Cena's worked with everyone. Ziggler is a contender for the spot given his recent determination to answer the call and defeat Cena. The member of Ne Day that doesn't wrestle the tag match is a possibility too as they all recently took a crack at the challenge. Dean Ambrose and Wyatt's henchmen are all candidates too what with their matches being cancelled due to a Randy Orton injury.


Hard to say who'll win without knowing who the challenger is. But I'll go with Cena retaining and losing the belt on RAW. There's so much talk of him taking time off that it seems impossible he'll be the champ this time next week. But I think he'll drop the gold on Monday rather than on PPV. Which would make sense as that's been the home of his Open Challenge since it started.


The only other match that's not a PPV rerun is WWE world champion Seth Rollins versus... Demon Kane. Yes, Demon Kane. Because that's how we're referring to him now. That character's mad and fragmented nature has finally reached the point where WWE have embraced it and decided to run with a multiple personality storyline for him. I personally think they should go further with it and retcon Isaac Yankem, the Christmas Creature and Fake Diesel to be more of Kane's personalities. It'd be a laugh if nothing else.


You have to feel bad for Seth, really. Since winning the title he's gotten to work with Ambrose, Reigns, Orton, Lesnar and Cena on pay-per-view and a bunch of talented lads on TV, and now he's come up against the problem that seemingly every world champion in WWE faces sooner or later: proving themselves against Glenn Jacobs. As a character in a wrestling environment Kane is tremendous. There are very few things that can't be done with him at this point because he has such a ridiculous history, backstory and gimmick. But that doesn't mean he should be wrestling for the WWE title in 2015 at the age of 48.


Rollins will win. He'll be booked to show far too much weakness for 'The Devil's Favourite Demon'. The best way this match could be handled now that it's been announced is Rollins making short work of Kane, pinning him clean with a Pedigree before sauntering backstage and cutting a promo to Renee Young about how he's the best champion ever and he's retired Kane. Which, for the record, is a thing in this match: if Kane loses he's kayfabe fired as the kayfabe Director of Kayfabe Operations. It's entirely possible this will be his last match with the company. Though it probably won't be.


Last but not least there's the evening's second Hell in a Cell match between Brock Lesnar and The Undertaker. The pair have met in this match before. Okay it was thirteen years ago but it still happened. And on top of this exact bout having happened before (I believe the only time ever that two guys have had a one-on-one Cell match more than once) 'Taker and 'The Beast' headlined SummerSlam two months ago. These two facts taken together make this match seem very familiar despite the part-time schedules of the men involved.


I'd originally assumed this programme would stretch until WrestleMania 32. I'm pleased that it isn't. By the time that show rolls around it will have been two years since Lesnar ended The Streak. While there's a natural story to tell between the two on the 'Mania platform it's not necessarily one worth telling. Even if 'The Last Outlaw' avenged his loss at WrestleMania XXX he'd still be without his Streak. There are better uses for Lesnar both at WM32 and leading up to that show. Doing a couple of rematches with 'Taker makes sense but keeping it running for that long would have been dull.


I'm leaning towards a victory for 'The Pain'. Both lads were protected by the "controversial" (read "massively unsatisfying") ending to their SummerSlam bout, telling the crowd that they're each as good as each other and either can take a win here. This shouldn't be the case. Lesnar should win. He has the longer future in the company and is worth more to them at this point. As he no longer has The Streak there's nothing to be gained from having 'The Phenom' get his win back. He retains his veteran allure and character mystique no matter what. Lesnar losing tarnishes the monster reputation that's been built up over the last several years. Lesnar losing is absolutely not what's best for business.