WWE Beast in the East review 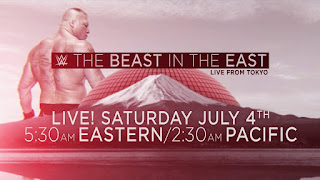 Beast in the East is the first WWE show in sixteen-and-a-half years to be named after a specific performer. The last one was 1998's Rock themed Rock Bottom, a tag-heavy  show tied into Rock's then-recent swerve heel turn and alignment with Vince McMahon's Corporation. Beast in the East was named, obviously, after 'The Beast Incarnate' Brock Lesnar. It's also a mild alteration to Bam Bam Bigelow's 'Beast from the East' moniker (although the East there referred to the US east coast as opposed to Japan), something which WWE owns the rights to after their purchase of WCW and ECW trademarks and tape libraries well over a decade ago.

There we are. A paragraph of trivia to start!

Despite being the only performer featured on the poster and giving the event its name Brock Lesnar didn't actually have a high profile match on this card. He wrestled slap bang in the middle of the card and his opponent was Kofi Kingston. While Kofi's a reliable hand he's not the sort of name we've become accustomed to seeing Lesnar face and the match served mostly to highlight that the card was the oddity we'd all been expecting. Basically it made clear that it was more a broadcast house show as opposed to something legitimately special.


Although the show was named after Lesnar it was made clear by the show-opening hype video that the night's real top match was Finn Bálor challenging Kevin Owens for the NXT championship. It was featured far more heavily. The identity of Lesnar's opponent wasn't even mentioned.


The opener was Chris Jericho versus Adrian Neville. It was interesting (to me at least) that Michael Cole talked about Jericho's time in FMW during the 90's but took a while to mention Neville's years in Dragon Gate. Perhaps it's because Dragon Gate's a current promotion and WWE doesn't generally do well acknowledging those. Still, at least they bothered.


The match was nothing special. Neville was left to take the majority of the big bumps and do the running about. Jericho concentrated more on pandering to the fans, running though his key spots, and teasing that he'd dive out of the ring. For a guy who wants to position himself as one of the greatest workers ever his efforts here were poor. They sped things up in the last few minutes but we got a disappointing result: 'Y2J' put his knees up as Neville hit him with the Red Arrow and immediately applied the Walls of Jericho for the tap out victory.


A ten second shot of Brock Lesnar walking into the building followed that (flouting the Company Dress Code by wearing jeans and a non-merch T-shirt). It was more enjoyable that Jericho's ego-fuelled shenanigans.


Match two saw Nikki Bella defend the Divas championship against Paige and Tamina. It should be noted that Tamina enters to some borderline racist jungle drums music. Nikki and Paige have worked against one another more than enough over the last six months to have a pretty good baseline for their matches at this point. Tamina managed to avoid dragging things down and we got a fun three-way. Nikki retained with a forearm to Tamina after a failed Superfly Splash (Paige was outside the ring after taking a super kick from Tamina as she had Nikki locked in the PTO). Yes, Nikki retained with a forearm. Because apparently main roster women's matches don't warrant proper finishes.


After a  video in which Lesnar told us he respects no one and likes hurting people Kofi Kingston clapped his way down to the ring. Like a lamb to the slaughter. What followed was an enjoyable one-sided trouncing. Kofi got some offence in but Lesnar no-sold all of it before grabbing hold of the New Day member, giving him some suplexes, and finishing him off with an F5.


After the match Lesnar gave Kofi a German suplex and another F5. Just because. Big E and Xavier Woods ran out to make the save, which naturally didn't end well for them. They each took an F5. The audience seemed particularly impressed with 'The Pain' hoisting up Big E.


In a peculiar move the NXT championship match followed that. When Lesnar v Kingston went on third I'd assumed Bálor v Owens had been granted the main event slot. Which would have made a great deal of sense considering the popularity of the NXT brand and Bálor's history in Japan. The match had a big fight feel to it and WWE tried to ramp it up by having flowers presented to the competitors. Bálor took his with good grace while Owens hilariously threw his into the crowd and shouted about hating the country. The fans did a better job of making things seem important by festooning the pair in streamers.


As the pair got things off to a wild start with an immediate shotgun drop kick and cross body to the outside from Bálor, Michael Cole did a rare bit of good work as he explained that Bálor had worked his first New Japan show at the Ryōgoku Kokugikan arena (where this show was being held) and referenced a tweet in which he'd mentioned "the return of a Prince." I continued to be astonished at his good work when he referenced Bálor's many accolades, as Prince Devitt, in New Japan.


Meanwhile Bálor and Owens had a spirited exchange in and out of the ring, Bálor controlling the pace until Owens slapped on a headlock. Bálor battled out but it was Owens who was in control after that. He threw Bálor into ring steps outside the ring and landed on him with a senton when he rolled back into the ring at the nine count. The challenger was worn down with another trip out of the ring and then trapped in another headlock.


Bálor battled out and regained momentum with a drop kick to Owens' face and a forearm from the second rope. 'Mr Wresting' fired off some punches and then ran through the set up to Cena's Five Knuckle Shuffle, and the move itself. An AA attempt failed when Bálor slipped off Owens shoulder, knocked him to the mat and double stomped him. Owens tried the AA again. Bálor escaped again and walloped the champ with a Pele kick.


Owens rolled out of the ring to try and regain his composure but was met with a tope then thrown back into the ring to take an inverted Bloody Sunday. Bálor went for the top rope double stomp again but Owens moved and through him into a corner for a cannonball. A package bomb earned the champion a two count and a "This is awesome!" chant. That prompted Owens to tell the crowd to shut up, a nice character moment in the midst of a great match.


Bálor pulled himself back to his feet and dropped KO with a slingblade. The challenger immediately dashed to the top rope but Owens recovered and grabbed his feet. Owens forced Bálor down onto the ring apron but got staggered with a Pele kick. Bálor went for the double stomp again. This time he hit it. But Owens kicked out.


The pair made their way to the top turnbuckle again, Bálor attempting a superplex on the champ. Owens fought him off and tried for his fisherman buster but Bálor escaped. When he returned to the corner he was scooped up for a more devastating move: an AA from the top rope. That was followed with an Owens Swanton bomb. Bálor got his knees up and gave Owens Bloody Sunday. Owens kicked out. Bálor rushed him. Owens dropped him with a super kick.


The two again their way back to their feet. Owens screamed at Bálor that he couldn't win. Bálor fired up, blasting the champion with a lariat before shotgun drop kicking him into a corner. That left Owens prone, finally, for the Coup de Grace, which Bálor hit to finally win himself the NXT championship. They easily took match of the night honours with a spirited, even performance that started strong and built to a great crescendo.


After the match Hidoe Itami was shown looking a bit moody at ringside. It's not impossible this was foreshadowing for a heel turn spurred by Bálor "stealing" his moment. Tatsumi Fujinami came out to raise the new champions hand, something which really highlighted that this was a glorified house show. Owens then refused a handshake from the man the beat him. Which is exactly what you'd expect from Owens' character.


The main event couldn't match the heady heights of the NXT championship match, not least because it featured Kane and John Cena. Bad News King Wade Barrett I and Dolph Ziggler, their respective partners, are good but they weren't enough to help outshine Bálor and Owens. They worked a basic tag main event, the sort you'll be familiar with if you've ever been to a WWE house show or watched an episode of SmackDown. It was awkward in places and had a painfully obvious outcome: Ziggler, having been isolated for around ten minutes, made a tag to Cena, who wandered in, AAed Barrett, and pinned him. As climaxes go it was poor and summed up the match as a whole.


Beast in the East was an oddity of a show. It was clearly not intended to be as big a deal as Elimination Chamber, the last Network exclusive offering, had been. While it was nice to see Lesnar squash someone it wasn't exactly a must-see match. The only thing of substance on the show was Bálor versus Owens, and that wasn't enough to make the show as a whole worthwhile. If WWE wants to use these specials as a way to attract and keep subscribers they'll need to do better than this.