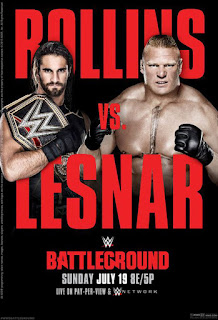 With a Rollins versus Lesnar championship match in the main event slot WWE could have taken it easy with the Battleground undercard. They've done such a good job building Lesnar up (keeping him strong, if you will) over the last eighteen months that getting to see him wrestle can be considered a special occasion. Even when it's on a house show in Japan against Kofi Kingston.


But they haven't taken it easy. The undercard of the Batteground show has clearly had some thought put into it, with some matches that will almost certainly be very good and others designed to heat people up for bigger, better things sometime in the (presumably not too distant) future. Of the former we have Sheamus versus Orton and the tag team championship match. Of the latter we have Reigns versus Wyatt and (potentially) the IC title three-way. Meanwhile Owens versus Cena can fit snugly into both categories.


That comment about the three-way may confuse some people so I'll talk about that first. I don't think Miz, Big Show or Ryback should be considered locks for top card spots. Miz had his chance in 2010 and 2011 and he blew it. There's always a chance Show could be slotted back into a top spot in an emergency but on the whole I think we should be expecting to see him at this upper mid-card card level from now on.


But something big could be planned for Ryback. His status has been all over the place over the last few years. He went from main eventing shows against WWE champion CM Punk to being in a nothing tag team with Curtis Axel before being sensibly turned face again so that he could be slowly shifted up the ranks once more, which is where we find him now. This match is clearly designed to boost his standing by having him beat a monster and an irritant at the same time. It's possible that the intention is to have him ready for something big by the end of the year. Whether that's the case or not he'll be leaving with the gold.


The Reigns v Wyatt match is more definitely about making someone look good and getting them ready for something else. It's just not obvious who that is. I can fully understand people expecting Reigns to win this match but I don't think it's anywhere close to a foregone conclusion. We know that WWE likes to stretch feuds between major names (which Reigns and Wyatt are) over two or three pay-per-views. I fully expect to see a rematch at SummerSlam. And because of this it's possible 'The Eater of Worlds' will defeat WWE's favourite Samoan.


If that happens I don' think it will be a clean victory. It almost certainly wouldn't, in fact. Reigns is considered the more important of the two long term and as such he's the only man in this feud likely to gain a win clean. But Wyatt winning via shenanigans at Battleground would be the simplest way of setting up the SummerSlam rematch. It would also be unexpected and allow the creative team to do some sort of distraction finish with Wyatt utilising Reigns' daughter in some way, which is something they seem inexplicably big on right now.


Owens v Cena III: The Reckoning should be amazing. Their first two matches have both been match of the year contenders, adding to Owens' generally strong body of work from his six months in NXT and Cena's surprising, welcome, and mildly baffling string of wondrous matches against mid-card wrestlers. They're currently tied at one win a piece. That would usually make me lean a little more towards a Cena victory because it's rare for him to fall behind on the victory tally when he's in a series with someone, especially someone not yet established. You need only look at the Rusev programme from earlier this year for a perfect example of Cena losing an initial meeting only to go on to win each subsequent bout, despite it not being in the company's long term best interests.


Things are different with Owens. Not only does he have more momentum than 'The Bulgarian Brute' but WWE seems generally more interested pushing him, presumably because they see more potential in him than Rusev (rightly so, if true). By the time we were midway through Rusev v Cena it was clear they didn't really see Rusev as someone who'd be headlining soon (a shame because had Rusev not lost at all to Cena, or even just had one more win and looked a smidge more competitive in his losses he could have been a great world title contender by now). Owens is being afforded time to flesh out his character and being presented as a man who could very well be Cena's equal in the ring. This is, basically, a programme that features a man who has a future at the top of the card and a man who is the top of the card.


I think this is a bout Owens has to win. His character is one that needs the advantage over Cena at this point. We need to be shown that he'll keep pushing himself after suffering a loss, and a second win over Cena would be so much better for the longevity of this rivalry. The best route that could be taken with this feud is presenting Owens as the surly, indy-friendly version of Cena, which he pretty much is. For that to truly work he needs to have Cena's skill of rebounding from a loss with a more dominating performance.


The only downside of an Owens win would be the loss of Cena's weekly US Open Challenge from RAW.  It's been the highlight of most RAWs since it was introduced a few months ago and has allowed Cena to have what I think is shaping up to be the strongest in-ring year of his career. But this would be a small price to pay to enhance Owens for a bit. And there's no reason 'Mr Wrestling' couldn't do his own weekly challenge, which I'm sure would keep the good matches coming and be an interesting way of keeping the Cena v Owens rivalry alive.


On a similar note, I expect Sheamus v Orton to be good as well. They generally have enjoyable matches together, bringing out the best in one another and having good timing together. It's a shame they don't have more of a story beyond "Randy came back after his hols and took out his latest indecipherable babyface frustrations out on Shaymo" because if they did I think I could have been tempted into caring about this. Sheamus will presumably win because he's got the Money in the Bank briefcase and he'll need to be kept strong for whatever angle that earns him.


The Prime Time Players v New Day should be a reliably fun match too. New Day's ability to get insane heat from audiences should keep people interested and help to encourage cheers for the PTPs. The last couple of months have demonstrated that Young and O'Neil can contribute good matches if the booking's right and they're given long enough to pull themselves together. Hopefully that trend will continue. As far as winners go I'll go with the Players because they've only had the titles a month. Should New Day win it will be after cheating, quite possibly Xavier Woods and Kofi Kingston swapping places at the finish. Because sneaky heels, am I right?!


Which leaves us only the main event to discuss. I'll start with the obvious and say this match should be very good. Lesnar and Rollins have interacted a fair bit this year what with their interaction in the Royal Rumble triple threat and their handful of intense scuffles. This, along with the fact that Lesnar matches always benefit from a lot of planning and forethought, should ensure they put on a good show. It's interesting to note that this is their first ever singles match despite them interacting as long ago as Night of Champions last September, when Rollins caused a DQ with a failed Money in the Bank cash-in.


The story of the match seems easy to guess. Lesnar will be the unstoppable monster he always is and Rollins will play the coward. Lesnar will dominant the early going before Rollins cheats to gain an advantage for a while. There things get hazy. Lesnar will obviously make a comeback but it won't necessarily lead to a win and his fifth WWE world championship. A month before SummerSlam doesn't seem like the right time for a title switch. For that matter Lesnar doesn't feel like the guy to take the title from 'The Future'. That would be Roman Reigns.


So I'm going to say we'll see Rollins retain the championship. I can't see it being a straightforward win. Lesnar's unlikely to take one of those for someone not named Roman Reigns.


Battleground looks like it could be a good show. Despite the puzzling absence of Dean Ambrose and the depressing absence of the Divas division, which had only been rejuvenated on Monday (although there's time for a women's match to be added I think it's sad that after doing such a good job of creating interest in the division nothing was immediately announced to capitalise on the momentum), I think there's a lot to look forward to. Owens v Cena and Lesnar v Rollins alone are worth watching this show for. Anything else being good is pretty much a bonus.