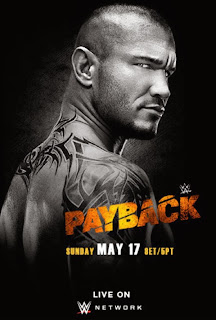 Payback is going to be an historic pay-per-view. In the main event, for the first time on a WWE television show, all three members of The Shield will face off against one another. This isn't like a generic, run-of-the-mill triple threat pitting three guys against each other for no reason. This is a big deal. Because the three have a shared history.


At the time of their split last June The Shield were one of WWE's top acts. They're one of the creative team's biggest successes of the last half decade. They achieved a lot together and were presented as a headline act despite being a faction, rare in WWE. That a match involving all three working against one another wasn't rushed into, instead being saved for later, further emphasises the importance and significance of its first occurrence.


At this point Rollins and Reigns are both bona fide main eventers. Dean Ambrose has cooled off considerably since the second half of last year but he remains popular and talented. It's come at a good time for 'The Lunatic Fringe'. He's there to take the fall but being involved gives him a status boost, something he's in need of after failing to capture the Intercontinental title (because what sort of self-respecting WWE wrestler can't win the IC belt in 2015?). The last few weeks of television have shown that he can still get crowds to react to him when given something to do.


I find myself unable to get as excited about the match as I'd like though. Because it's not the logical three-way that it deserves to be. Instead it's a four-way also involving Randy Orton. What should be a meaningful, memorable, landmark moment in the careers of all three Shield guys is instead something that's happening because Vince is in a bind when it comes to main events. A Reigns versus Orton versus Rollins triple threat was initially decided on via public vote on the April 27 RAW. Ambrose was added a week later when Kane was irked for the umpteenth week in a row by Rollins' arrogance. The reality of the situation is that WWE realised that this would be the third pay-per-view of the last five with a triple threat WWE championship match going on last. With a triple threat also planned for SummerSlam (a 'Mania rematch of Reigns v Rollins v Lesnar) the decision was made to make this a four-way.


The logic behind the switch is sound but it was a situation WWE could have avoided if they planned better and concentrated on elevating a wider variety of talent. They're throwing away one of the few meaningful matches they have access to to salvage a B-level pay-per-view. Technically, yes, they can still go ahead with a Shield triple threat at some point in the future but its appeal will be lessened because we'll have already seen the three at loggerheads here. You only get one chance at a first impression and all that.


Honestly, I'd have preferred Kane in the match in place of Ambrose. It would be far less offensive for him to be in there as the blatant fall fodder and it would have made sense in terms of recent characters directions. A month ago Ambrose wasn't involved with Orton, Rollins or Reigns while Kane and 'The Future' have been sniping at one another since shortly after WrestleMania (and Kane was running interference against Orty before that). His issues with Rollins could have been safely paid off in a four-way saving us the chore of sitting through a Rollins and Kane singles match, and as he's technically a heel his involvement would have made more sense from a ring psychology perspective: it would have been two heels and two faces in one match, instead of the three faces against one heel we're actually getting.


None of this is to say the match won't be good. Reigns has had a number of very good matches recently. Rollins is quite possibly the best active wrestler on the WWE roster. Ambrose and Orton are both reliable and over. Unless something very surprising happens the match will be satisfying. But this doesn't make it any less of a massive waste.


In the second biggest match of the night John Cena will defend the United States championship against Rusev in an I Quit match. This will be the fourth straight meeting for the pair on pay-per-view. Nothing about their previous three explains why a fourth is necessary. They haven't been bad together but they haven't been anything special either. The win-loss record also makes this a bit of a pointless meeting. After suffering a loss in their first showdown at Fast Lane Cena has dispatched Rusev twice. As we've been told this will be the final entry in their series the best Rusev can do here is draw the feud. That means it's impossible for him to come out of Payback looking like the juggernaut he was shaping up to be before he was sent Cena's way. It would have been better for all involved had WWE cut their losses and split them following Extreme Rules.


Not that that matters much. Cena is going to win this match and keep hold of the US championship so he can continue his run of surprisingly exciting TV matches against mid-carders. Rusev's future isn't clear but the last month of TV has made one thing certain: Lana won't be featuring in it. Not as his manager at least. Lana, you see, has been corrupted by The West, waving at crowds who chant for her and dancing with Fandango. She and 'The Super Athlete' are going to split. Presumably Lana will find someone new to manage and Rusev will take them on.


The obvious finish would be to have Lana quit on Rusev's behalf. She could argue she felt she was doing the right thing, Rusev's shaky claim of only having one definitive loss to his name could be maintained (just), and the desired split could be achieved. I don't want this to happen. Rusev and Lana are a great act and both will suffer for being apart. But what I want and what I think will happen aren't always the same thing when it comes to WWE.


Another fine example of this is the Bray Wyatt versus Ryback match. The idea is that Wyatt, having suffered a high profile loss to The Undertaker at WrestleMania, can be rehabilitated with a few victories over 'The Big Guy'. I can't see it working. I enjoy Ryback's character (especially when he's an anti-internet heel) but he's not on a level where a win over him is enough to make up for a recent loss, especially to someone like 'The Phenom'. He's not even a good enough wrestler to provide 'The New Face of Fear' with a good match.


This said I'm going to go against the grain and pick Ryback as the winner. Every so often WWE goes through a phase where obvious pay-per-view outcomes don't happen. Sting's loss to 'The Game' at 'Mania and Sheamus's loss to Dolph Ziggler at Extreme Rules indicate we're in one of those periods. A Wyatt win seems like the obvious thing but a Ryback win wouldn't alter any major plans so I think they'll go with it. 'The Eater of Worlds' can get his win back in the rematch (there's always a rematch).


Speaking of Shaymo and 'The Show Off', their bout is far more promising, although their feud seems to be running in reverse to booking logic. Instead of starting with a normal match against one another and running through gimmick matches afterwards they started with a gimmick match and have regressed to regular rules. Not that a Kiss My Arse match is a classic gimmick or anything but it's a gimmick nonetheless. They work well together and I expect they'll put out something good here. As Ziggles won at ER it's Sheamus's turn to go over this time.


Another outcome that seems easy to predict is The Ascension's loss to Macho Mandow and Curtis Axel. After four months on the main roster what potential The Ascension had is completely gone. Teaming Mandow with Axel isn't the best use of either man. Mandow has been one of the most popular guys on the roster for over six months now and it's disheartening that in that time WWE have blundered splitting him from Miz and preparing something meaningful for him to do afterwards. But at least they've come up with something. That's better than doing nothing with him, right? Right?


King Barrett v Adrian Neville is another one that seems fairly straightforward to predict. They met on the pre-show of last month's Extreme Rules. Neville won. They met again in the finals of the (shambolic) King of the Ring tournament two nights later. Barrett won. Barrett got himself a new royal gimmick with that win, which means he's the favourite to win again here.


The match I'm most looking forward to at Payback is the tag team title match. Cesaro and Tyson Kidd will challenge New Day for the championships they were cheated out of a month ago. If previous encounters are anything to go by this will be one of the best matches of the night. They also have a well chosen stipulation to work with: two-out-of-three falls. That's a good choice for two good teams anyway, but it's especially good here because New Day are defending their titles under the Freebird rule.


In case you don't know (unlikely as that is, being that you're reading a niche blog about wrestling already) this is a rule that allows any members of a three man unit to defend a two man tag team championship. It's application in a two-out-of-three falls environment could create some amazing heat as New Day swap members in and out on different falls, giving them an advantage in the latter stages of the match. I expect New Day to retain via shady tactics. I expect this to be the best match of the night.


And I expect Payback to end up being the latest forgettable WWE pay-per-view. There are elements of it that are promising, such as the main event, the tag title match, and Ziggler versus Sheamus, but there's not enough to make it look like it'll be worth more than one repeat viewing (if that). There are too any rematches and shoddy booking choices for that. Sadly, this isn't the first time I've expressed that sentiment about a WWE pay-per-view. Even more sadly, I'm yet to be wrong.