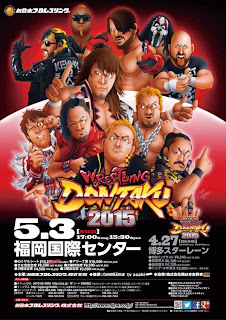 Back at the start of the month New Japan presented their twelfth Wrestling Dontaku show. Plenty of people have reviewed it in the weeks since but I thought I'd add my voice to the cacophony. Because I've been enjoying New Japan since Wrestle Kingdom and I thought "Why not, right?" Plus there's that sweet poster.


The show kicked off with a peculiar all-babyface eight man tag. The team of Jushin Liger, Tiger Mask, Mascara Dorada and Yuji Nagata took on Manabu Nakanishi, Ryusuke Taguchi, Kushida, and Captain New Japan. The crowd were really into it, presumably because of the involvement of Liger and Tiger Mask, but it wasn't anything special. Nakanishi looked good though. He's a guy I'd like  to see involved in the NEVER title scene. He was on the losing team though: Nagata got the win off an Exploder suplex on the Cap'n.


Match two saw Kota Ibushi and Yohei Kamatsu team to defeat Sho Tanaka and Tetsuya Naito. Ibushi and Naito were the respective stars of their teams, both guys frequently being talked about (by people more knowledgeable than me) as being amongst New Japan's next batch of headliners. I definitely see it in Ibushi. He's had two dazzling matches this year at Wrestle Kingdom and Invasion Attack, opposite Nakamura and Styles respectively. He lost both but was elevated by lasting as long as he did and entering solid showings. I've yet to see anything similar from Naito. He's not been put in a position to shine in the same way but there's nothing abou him that makes me want to see him have the chance, and his tag work has been wholly uninspiring. It doesn't help that his haircut is amongst the ugliest on the roster.


The Bullet Club made their first appearance of the night after that, represented by the dream team of Tama Tonga, Cody Hall and Bad Luck Fale. They would lose to TenCozy and Tomoaki Honma. It was Cody who took the loss again as he was pinned after a Honma top rope headbutt. That he keeps losing to Honma, the man who never wins, is presumably leading to something, probably a singles match where Hall finally gets a win. The match was fine for what it was but what it was wasn't much. Which was the intention. It was more a way of getting Honma, TenCozy and Fale onto the show and keeping Hall's stream of losses flowing.


The junior tag straps were up for grabs in match four. Roppongi Vice defended against former one time champions reDRagon and former two times champions the Young Bucks. It was, unsurprisingly, the best match of the night until that point. Highlights included: a Bucks double super kick on Baretta as he went for a tope; stuff shots from O'Reilly as he mounted Baretta; Baretta suplexing Nick onto the ropes and Rocky following up with a top tope knee; reDRagon's assisted wheelbarrow DDT and backbreaker-top rope knee combo; Baretta suplexing Matt from the top rope onto their respective teammates, reDRagon, and some young boys at ringside; the Bucks' buckle bomb-enziguri combo on O'Reilly onto Fish and Romero slumped in the corner; a run-up top rope German suplex from Baretta to Matt; the Indy-Taker to O'Reilly on the floor; and a series of super kicks on Baretta followed by a match-winning More Bang for Your Buck.


Taken as spot-fests with little psychology and no proper selling these matches are always good fun. All the teams involved here (plus former frequent contributors Time Splitters) have a good range of moves that can be mixed and matches in new ways to ensure there's always something new and-or interesting on offer. That said it wouldn't hurt to mix the division up a bit and get some new pairings involved.


The first of only two singles matches on the show, Kenny Omega v Alex Shelley, was preceded by a video package. It reminded us all that Omega has been on a mission to "clean up" New Japan's junior division and that Shelley is a fightin' babyface with the support of the deity Hiroshi Tanahashi himself. It did its job of elevating the match and reminding us that Omega's not a nice guy.


Shelley entered wearing a biker helmet for whatever reason (I suspect this was a gaming reference lost on me) and had Kushida and Taguchi with him. Omega entered in his Matrix-style leather jacket (get with the times, mate) and had the Bucks in his corner. Omega kicked the match off by offering a handshake. Shelley gave him a middle finger, earning himself cheers. The sequence seemed a bit off because Omega, the clear bad guy, had seemed pretty genuine. Maybe we were just meant to assume he'd cheap shot Shelley or something during the handshake but that sort of negativity is no way to go through life.


The pair exchanged the advantage in the opening moments and did a tonne of running about. Omega was the first to get in some extended offence when the Bucks distracted the referee and he countered a Shelley suicide dive with a trash can to the head (because he's cleaning up, geddit?). He stayed on the challenger with a camel clutch, a backbreaker and a nice bicycle kick into the corner before reintroducing the trash can. After belting Shelley in the face with that he gave him a fisherman buster, from which the Time Splitter kicked out.


On the outside Omega continued to use the bin (can) and also brought in a broom. A power bomb onto the bin (can) was countered by Shelley and was followed up by a vault over the top rope, catching hold of Omega and driving him down to the floor with a DDT. 'The Cleaner' took more damage when he rolled back into the ring in the form of a top rope double stomp but he managed to kick out. He withstood a super kick and attempted a power bomb but Shelley countered with a DDT. The challenger tried to follow up with a top rope splash but Omega got his knees up then gave Shelley a modified blue thunder bomb.


Shelley kicked out of that and escaped an attempted electric chair drop before hitting a dragon suplex. The pair exchanged blows, Shelley getting the better of Omega with an enziguri then giving him a super kick and Automatic Midnight for a convincingly close two count. Sensing their boy was in trouble the Bucks hit the ring but were cut off by Taguchi and Kushida and wiped out with some sweet, sweet Time Splitters double teaming. Shelley then hit Sliced Bread Number Two on Omega but only got a two.


Back on their feet Omega heelishly thumbed Shelley's eye. That was enough to open up Shelley for the Croyt's Wrath electric chair drop, which lead to a three count for the reigning champion. Afte the match Omega cut a heel promo about being too good to wrestle in the Best of the Super Juniors tournament but wished all the lads at ringside good luck in it. Kushida seemed particularly irate with Omega's behaviour. Having him win the tournament and going on to take the gold from Omega would make sense. It would establish him as a singles force and would play into Omega's defeat of his Time Splitters partner here.


After a lethargic intermission the show continued with Karl Anderson, Doc Gallows and Amber Gallows facing The Kingdom trio of Michael Bennett, Matt Taven and Maria Kanellis. The story was that Anderson was still smitten with Maria and Amber had been roped in to counteract her effect on him. It was pure silliness made worse by the lack of clear faces. Were we supposed to root for massive perv Anderson? Or were we supposed to cheer for Maria, who hadn't done anything wrong but seemed very happy to be presented as nothing more than an object to be ogled? It wasn't clear, and the only clue offered by the production team was that the match's biggest star was Maria's backside.


In terms of match quality this was adequate. The four lads are good in tag situations, although Anderson was hampered at points by his weird Maria-fixation gimmick. Maria's not bad, Amber is, but neither was bad enough to make the match a stinker. The match ended, fittingly enough, with Anderson stroking Maria's face only for her to kick him the privates. Amber then came in and went for a suplex on Maria but got rolled up with a small package.


After the match Anderson grabbed Maria and threw her to the ground. Seemingly unsatisfied by this the Bullet boys pulled her back up and gave her the Magic Killer. Then they ran off as Bennett and Taven returned to the ring to make the save. Anderson seemed unremorseful about possibly having broken the neck of his object of lust. I'd like it if this match were the end of the unpleasant Maria aspect of the Kingdom versus Bullet Club rivalry but I don't think it was.


More tag action followed that. First Togi Makabe, Katsuyori Shibata and Hiroshi Tanahashi teamed to defeat Tomohiro Ishii, Kazushi Sakuraba and Toru Yano in a lively tussle when Tana fell on top of Yano in an awkward, botched-looking exchange. Then AJ Styles and Yujiro Takahashi defeated Kazuchika Okada and Yoshi-Hashi when Styles dropped Hashi with a brainbuster and a Styles Clash. This was a particularly good match that did its job of reigniting the Styles-Okada dispute. Okada having the champ's number was hammered home after the match when 'The Phenomenal One' went to give Okada the Clash and Okada slipped out and came close, twice, to walloping Styles with the Rainmaker. It was 'The Ace of the New Era' who stood tall at the end of the segment.


The main event of Intercontinental champion Shinsuke  Nakamura defending against Hirooki Goto was preceded by a prime video package that established Nak as the cocky, charismatic champion and Goto as the underdog who wouldn't give up on his pursuit of the gold. It was also made clear that Nakamura simply didn't consider Goto a real threat to his title reign, something which carried over into the story of the match.


Nakamura refused to take Goto seriously until the halfway point of the match, by which point it was too late. The combination of the wearing down he'd already taken and Goto's tenacity meant he was unable to mount the comeback he needed to to retain his championship. Goto gave it his all, surviving a pair or Boma Yes in the closing moments before finishing Nakamura off with a Goto Shiki from the second rope and a Shouten, showing up the bigger star and earning the prize he'd bee determined to reclaim (he'd held the title in 2012 and had been the man beaten to start Nak's first reign, something I imagine the commentary team touched on during the match). A return bout between the two could be really interesting.


Overall this show wasn't bad but it was clear it wasn't intended to be taken as one of New Japan's better offerings. The IC championship match and Omega v Shelley were both very good and the junior tag match and semi-main event were both enjoyable offerings but nothing was better than it needed to be. It was a decent show and that's all it was intended to be.