The fina bits of hype for Takeover: Unstoppable. It's another packed card, even when you consider two of the key performers (Zayn and Itami) have injuries that will either hamper their performances or stop them wrestling entirely. This show was good. Even with Carmella wrestling.


Tweet 1: It's NXT time.
Tweet 2: Lengthy recap of Zayn versus Cena off the RAW where Sami kicked out of an AA with a popped freakin' shoulder.
Tweet 3: Tonight: a face-to-face chat! #money


Tweet 4: Liking Solly Crowe's new hairdo.
Tweet 5: 'Wolf Shaman' Barry Corbin exhibiting #malice according to Byron Saxton.
Tweet 6: Remember the other week when they showed a video of Barry Corbin talking about being special and being heelish? This is where it was going.


Tweet 7: That was a nice End of Days to be fair.
Tweet 8: I like the phone dial tatt on Barry's arm. Just noticed it. Very Dial H.
Tweet 9: "Are we gonna do this or not?" - Rhyno on making sweet, sweet love to Barry Corbin
Tweet 10: Rhyno there, Goring trainees dressed as security staff. Great stuff.
Tweet 11: All he needs is Cyrus back as his manager and I'd be on board with Rhyno getting a title reign.


Tweet 12: Earlier this week Finn Bálor wore a tie and chatted about wanting to be the NXT champ.
Tweet 13: Bálor basically said he wants to the champion. Did its job. He talked about things like they matter.


Tweet 14: Earlier this week Tyler Breeze looked mmmmmm... gorgeous.
Tweet 15: Love Breeze's gimmick of being more interested in becoming number one contender then champion.
Tweet 16: If Breeze becomes champion will he get a spinner belt?


Tweet 17: No NXT name for this week's enhancement talent. #sadface


Tweet 18: The crowd have gone with Black Shorts. It's not as catchy a name as Blue Pants.
Tweet 19: Sasha doing Becky's hair flip taunt way better than Becky there. Yeah, Becky can't even pull off a hair flip.


Tweet 20: Charlotte and Dana Brooke feuding over a Tapout sponsorship. Emma and Bayley feuding over head bands. It was all going so well...
Tweet 21: Charlotte still can't wooooooo.
Tweet 22: "Tempers are beginning to flair" - Corey Graves with a cheeky comment


Tweet 23: Name TBD reuniting with Solomon Crowe there. That was something.


Tweet 24: Everything about Carmella is ridiculous.
Tweet 25: I like Bliss having her name written in purple on the back of her purple vest.
Tweet 26: Not really a fan of Carmella's ring work but that arm hook submission looks pretty good.
Tweet 27: Blake and Murphy distracting Carmella and giving Bliss the chance to win.


Tweet 28: I'm kinda hoping the setup for the Carmella turn is a swerve and Bliss is the one who becomes their manager.
Tweet 29: Is Carmella's gimmick that she's a modern day Sunny?
Tweet 30: Carmella shamelessly thieving Enzo's shtick there. Absolutely sickening.


Tweet 31: Earlier this week Hideo Itami sat down with his lovely hair.
Tweet 32: Itami putting it out there that he wants a title match with 'Mr Disrespect' Big Kev Owens.
Tweet 33: Itami's promo was electric.


Tweet 34: "And Charlotte thinks I'm jelly of her?" - Dana Brooke
Tweet 35: Two women's matches on one special? Will the world not implode?


Tweet 36: No Rosebuds and Rose has a beard. So this is basically Leo Kruger wearing a red robe and Terry Funk's tights.
Tweet 37: IT'S TYLER!! *swoons*
Tweet 38: 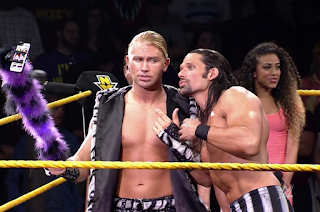 Tweet 39: If Itami can't wrestle in the triple threat match (which he can't) Adam Rose should totes replace him.
Tweet 40: Just kidding, obvs.
Tweet 41: Bálor likes crouching in the corner by the fans before getting in the ring because it reminds him of the Butlin's circuit.
Tweet 42: No idea if Bálor ever participated in the fabled Butlin's circuit but I like the idea of him doing so.
Tweet 43: They should have done a show-long story where Breeze tried to recruit a partner.
Tweet 44: Imagine the fun to be had with him in skits with Corbin and Rhyno. He could have asked Blake or Murphy to get involved.
Tweet 45: They could even have had Mojo Rawley back for a cameo. I'd have marked.
Tweet 46: Obviously that's a very un-NXT idea and I wouldn't want it to happen. It's too Russo.
Tweet 47: Rich Brennan just called a snap suplex. I shouldn't be but I'm impressed.
Tweet 48: Don't really cover enough Rose matches to mention it often but I really like his spinebuster.
Tweet 49: Rose has applied the dreaded Sleeper. This is OVER.


Tweet 50: It's great how Bálor and Styles have lifted moves from each other and that most people in positions of authority in WWE won't even realise.
Tweet 51: Bálor will be busting out the Bálor Clash soon.
Tweet 52: Breeze wins with a small package more often that 2005-06 era Danielson.


Tweet 53: Another recap of Zayn v Cena. Big match for Zayn, yeah, but I really don't need it covered more than once per show.
Tweet 54: Top Dog versus Big Dog. Kennel From Hell. So much money to be made.
Tweet 55: Sami's out for his main event promo wearing his all business flat cap.
Tweet 56: And his own merch. Standard.
Tweet 57: Hilarious bit of ADR slipped in to get the shoulder injury mentioned. Got to keep up the kayfabe that this isn't taped a month in advance.
Tweet 58: Zayn going full heel, revealing that Owens' son prefers Zayn's merch. What a villainous move. I'm all for Owens breaking Zayn's arm now.


Tweet 59: Owens will win. Zayn will be demoted to the main roster because he can't hang in the big league of NXT.
Tweet 60: That... was a great show. Good work, everyone. Good hustle.
Posted by Dave at 10:43