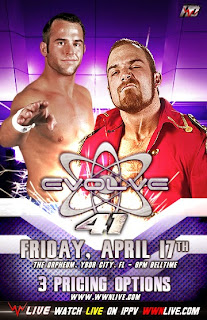 One of the best things about EVOLVE is that shows rarely leave you feeling frustrated. After the average WWE show I'll have a list of things that could have been done differently, usually correlating with a list of things that make no sense. With EVOLVE there's usually nothing to comment on but the quality of the matches, which is rarely anything less good, and their streamlined nature means they never outstay their welcome. Gimmick matches are used sparingly and thus mean more, and everyone gets the chance to showcase their ability.


EVOLVE 41 was no exception to any of this. It was another satisfying show. Things kicked off with the "new" Premier Athlete Brand entering the ring for a chat.  Nese blamed Su Yung for the group's losses at the WWN Live Experience (even though neither he nor she were there). He told her she had one more chance or she'd be fired. He also promised that the Brand would end Ronin for good in the tag title street fight at EVOLVE 42. After that he beat loveable Londoner Martin Stone with a single leg crab. Yeah, Stone was in the enhancement role again but the match was long enough for him to look competitive and it took plenty of interference from Athena and Val for Nese to apply the single leg crab, so he didn't look overly weak.


Caleb Konley spoke up after that. He called out his opponent, the debuting Rey Horus. On the one hand the match was fairly predictable. Konley kept the pace slow at first before busting out the big bumps to make Horus look good as the pace sped up. On the other hand the match had a somewhat surprising result, with Konley pinning Horus following a Samoan driver from the second rope. Horus was good. His selection of flying moves, while no more dazzling than anyone else's, were crisp and on target. If AR Fox is done with EVOLVE, as has been claimed by both Sapolsky and Fox himself, Horus would be an ideal replacement.


As he'd be an ideal new singles star I'd expected Horus to win, getting his EVOLVE run off to a strong start. I'm fine with Konley going over though. As I've written before he's someone that Sapolsky seems to feel he can rely on and build up over time. Within EVOLVE it's not a slight to lose to 'The Obsession'.


The PAB continued talking after that. Su Yung announced that she'd secured a Shine championship match for herself at EVOLVE 42. Val cut in and said Athena would be in the match instead. Then she had Athena choke Su, ripped Su's shirt open, and made fun of her physique. Which came dangerously close to being in poor taste. What saved it was that it's clearly going somewhere and Su will presumably get her revenge at some point.


Match three was TJ Perkins versus Biff Busick. As is often the case with mat wrestling matches in EVOLVE this took a while to get going but was enjoyable was it did. While it was good I would have preferred TJP in a match against a flyer. He and Rey Horus could work well together. Perhaps that's something Sapolsky wants to build up to, giving Horus a few wins first so it means more when it rolls around.


Perkins won the match with a Fujiwara armbar and kicks to Busick's head. Busick told the referee and a cameraman that he didn't tap out after the match. It was hard to tell from the camera angle but it didn't look like he tapped out. This will presumably lead to another meeting between Busick and Perkins. My money would be on it having a submissions only stipulation.


Ethan Page v Rich Swann was not preceded by the standard issue Swann sing-song. Because this was a grudge match and Swann was being serious (plus it probably saved some money this way). Page had turned on Johnny Gargano at Mercury Rising as a way of openly making a name for himself at the expense of a bigger name. He had refused a match with Gargano, saying Gargano had to wait a year if he wanted the match, a call back to 'The Whole Shebang' making Ricochet wait a year for his Open the Freedom Gate match. So  Page had been booked against Gargano's Ronin teammate Swann instead. From a storytelling point of view this made sense. I'm wary of the feud being kept hot for a year though.


They didn't produce a masterpiece but that was fine. Being an amazing wrestler isn't Page's thing. He's more about character and trash-talking. That's rare in the current EVOLVE so it works nicely from Page. He's providing something nobody else does, even if it is something fairly basic. They did some extensive ringside brawling (including a piledriver on concrete to Swann) before running through finishers and signature moves in the ring. Page won with the Spinning Dwayne, his Rock Bottom variant.


TNA Superstar™ Davey Richards and EVOLVE standout Johnny Gargano followed that. Richards took the early lead when he proved a step quicker than 'Johnny Wrestling', countering a number of his moves and setting the pace of the match. He also took on the role of antagonist, which I liked because I find him far more entertaining in that role than when he's playing a bland good guy.


The match was very good. Each ran through their usual repertoire and their styles meshed nicely. After surviving a lawn dart and two Gargano Escapes it was Richards who went over after hitting the former two time Open the Freedom Gate champion with a rolling kick to the back of the head. After the match a despondent Gargano told Rob Naylor that he and Swann would go to war with the Premier Athlete Brand. Then he no-sold Ethan Page. That's hardly building anticipation is it?


The main event was a two-out-of-three falls match between Roderick Strong and Timothy Thatcher with the winner getting an EVOLVE title match against Drew Galloway. The first fall started with Roddy stalling and trying to get under Thatcher's skin. It didn't work. He was eventually caught and grounded by Thatcher. Despite this Roddy managed to win the first fall with a roll-up as Thatcher tried to apply a Fujiwara armbar, having targeted the arm since he caught hold of Strong.


Fall two saw Thatcher annoyed at Strong getting the first fall in a flash fashion and Roddy looking to soften up his foe for a similarly quick second pin. They brawled at ringside but would return to the ring fairly quickly to exchange strikes before Thatcher locked in the Fujiwara armbar successfully. Strong tapped immediately, saving himself from taking too much damage. This was sold as a veteran move but actually he could have made the ropes easily enough from where he was and retained his pin advantage.


The third fall was, appropriately, the shortest of the three. It worked nicely as an enjoyable, self-contained match that was all about the two men racing to get a victory. It was Strong who got it following a sick kick and a Gibson driver.


After the match Strong said he was going to embarrass Drew Galloway and take his championship at EVOLVE 44. Thatcher got in on the chat action (chat-tion?) by saying he'd work his way back up and challenge the winner. Then Biff Busick wandered out and said he'd been screwed earlier on the show. Strong said Busick sounded like a baby and told both guys they needed to learn to deal with being losers. Thatcher and Busick had a brief staredown in the ring. Then Biff went backstage. Thatcher's music played to end the show. And that was that. Not even a show-closing promo. Sometimes they're unnecessary, aren't they?