It's not the rematch we wanted, but it's the rematch we deserved: Riley v Owens II. It happened and Riley lost, as he was always going to. More Owens versus Bálor, Zayn or Itami now please.


Tweet 3: Can't wait to hear on "the dirt sheets" what Vince makes of Bálor's demon mode.
Tweet 4: Finn? Who's gonna get beaten up by a guy called Finn?


Tweet 5: I like Tye Dillinger's leather scarf. He'll go far with that and his haircut and his pseudo-Punisher emblem on his trunks.
Tweet 6: Graves doesn't shy away from highlighting the ridiculous aspects of what he's seeing. I approve. Adds credibility.
Tweet 7: I often wonder how guys like Dillinger, who have been linked to WWE for years on end and aren't especially good, would fair on the indies.
Tweet 8: Look! Look, everyone! It's Tyler!
Tweet 9: Breeze saying he's been dominating. So sexual. So needlessly, enjoyably sexual.
Tweet 10: I could get into Bálor v Breeze.


Tweet 13: Owens is about to talk about Alex Riley. Should be gold.
Tweet 14: I enjoyed that. Wasn't as lol as his recent Twitter work but it was never going to be.
Tweet 15: Imagine if it had been though. Imagine Owens going full Twitter mode on Riley on TV.


Tweet 16: Apathy reading: 10/10. Yeah, it's Becky Lynch.
Tweet 17: Two babyfaces teaming up against one heel. This won't work, guys...
Tweet 18: At some point I might hunt down a picture of Charlotte from when she debuted and compare it to her now. I bet the difference is massive.
Tweet 19: In my mind it's big. I bet it's bigger. The point I'm so eloquently making here is that Charlotte has changed a lot since signing with WWE.
Tweet 20: Sasha should have been on commentary for this match. Would have spiced up commentary and put over the women in the match as larger threats.
Tweet 21: That inverted figure four from Becky and Natural Selection from Charlotte was good.
Tweet 22: Charlotte just got an unexpected Doomsday Device on Lynch and didn't cover. n00b.
Tweet 23: Love the angle Charlotte gets on the figure four. Looks incredible.


Tweet 24: That finish WWE acceptable in Axel v Miz v Barrett that one time because it didn't expect better.
Tweet 25: Disappointing something so cheap went down on NXT. But that's the point. Becky looks cheap. Charlotte's protected.
Tweet 26: Lynch does nothing for me as number one contender. But she's fresh in the role.
Tweet 27: Charlotte v Banks is played. Bayley can't keep challenging and losing. Too early for Dana and Carmella. Bliss has had a turn.


Tweet 28: Pleased to get another CJ Parker match. Every week I see him I think it's the last.
Tweet 29: I like both guys but Itami v CJP doesn't sound like the best thing ever.
Tweet 30: Hoping CJ invests in better fitted trunks now he's a true independent contractor. The ones he's wearing here are unnecessarily skimpy.


Tweet 31: I was right to be skeptical about this match.
Tweet 32: That could've gone better. The shotgun kick being Hideo's finish doesn't help.
Tweet 33: He needs something a little more dynamic for when he's not busting out the G2S.


Tweet 34: "I'm kind of a big deal" - Becky Burgundy
Tweet 35: "Save it for the ring, Bosco" - Becky Lynch, with what I assume was a putdown
Tweet 36: That backstage exchange perfectly illustrated why I'm not especially interested in Lynch's title shot.


Tweet 37: This lad has a fun look to him. Blatant Gore fodder though.


Tweet 38: The commentary team need to do a better job of putting over Rhyno's thighs. 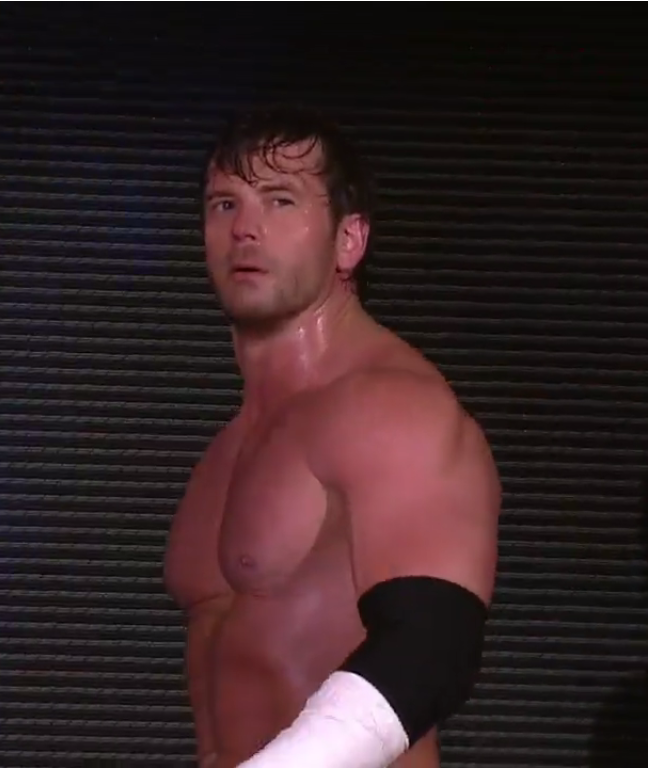 Tweet 41: Alex Riley smacking his hand against the ring steps. You know what that tells me? Riley is a MAN.
Tweet 42: Honestly though, the state of Ragin' Riley.
Tweet 43: Sickened by this crowd's lack of hatred for Riley.
Tweet 44: This match will end with Riley unleashing the power of Rage only to realise it's not enough. Owens will apron bomb and pin him.
Tweet 45: I still can't look at Alex Riley without seeing a textbook mid-90s WCW mid-carder.


Tweet 46: "Look at that!" - Rich Brennan, who can't call the match because Riley's doing random nonsense instead of actual moves
Tweet 47: Lol at Graves saying Riley's calling on the power of RAGE.
Tweet 48: Alright. Riley's been beaten twice now. Can he just be released please. Let him take his natural place as TNA's new colour guy.
Tweet 49: Generico versus Steen: the feud that never ends.


Tweet 50: Referees and young boys out to pull the lads apart and go on crash mat duty. Triple H pulling plays from the Heyman play book.
Tweet 51: Really good show that. Good hustle, everyone.
Posted by Dave at 07:03