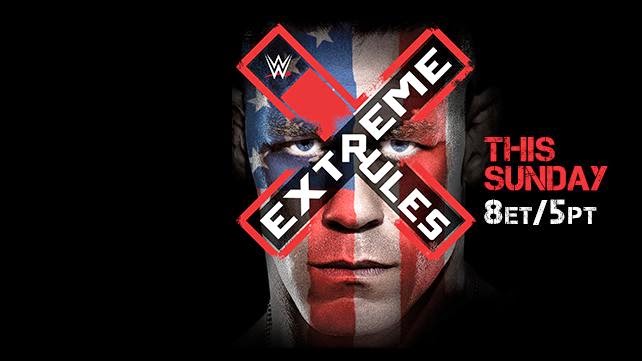 Last month WWE outdid themselves with WrestleMania 31. Despite a frustratingly mediocre build the show ended up a surprise hit, easily the best 'Mania of the last few years and arguably amongst the best ever. Having rewatched it a few times it's possible it's my second favourite WrestleMania ever, behind only the mighty X7.


Coming out of that show the company was set for success. 'Mania gave them momentum and more good will than they've had in a long time. They had what looked like a long-term plan in place with their three singles titles on three of their most established performers. They had a great story waiting to be told with Roman Reigns seeking retribution after being robbed of his destiny. This is without mentioning the white hot Brock Lesnar, who was (predictably) written out of storylines due to the nature of his contract.


But somehow, less than four weeks later, none of that matters. Extreme Rules looks like a shambles waiting to happen. Aspects of it actually look like a bad parody of a WWE pay-per-view. And the scope isn't there for surprise success as it was with 'Mania. 'The Grandest Stage of Them All' was able to dazzle us with elaborate entrances (Rusev ON A TANK, guys!), popular wrestlers winning, a well-paced show, a main event that wasn't the half hour bore everyone expected, and a Money in the Bank cash-in. Extreme Rules has access to few of these tricks and has a less inspiring card as its starting point.


Nothing highlights the limitations of Extreme Rules better than one of the stipulations placed on the main event. One month after hitting possibly the greatest RKO ever Randy Orton is in a match where the move is banned. The logic is baffling. The RKO is one of the most over moves in wrestling and WWE's giving us a pay-per-view match where we won't get to see it. I understand the effect it will have on match psychology and the story they'll tell but that doesn't stop it being a needless hindrance.


Adding to the peculiarity of this decision is that Orton and WWE champ Rollins will be duking it out in a cage, an environment that would lend itself to some particularly nice RKO opportunities. Of course it could be deployed after the match as a way of sending the punters home happy, which seems like it may be necessary because Orton is almost guaranteed to lose this match, but that will be a hollow effort: people will react more to it if it could win 'The Viper' his ninth WWE championship because it has more meaning in a match.


An alternative RKO scenario that shouldn't be ruled out is Orton hitting the move "on instinct" and getting disqualified. That would be cheap and disappointing but WWE don't care about things like that. They only care that it would protect Orty (always a priority) and play into Rollins' key character trait of being a little weasel who flukes his way to victories rather than earning them.


The only positive about the WWE title match is that everything before the finish and the RKO teases should be very good. Orton and Rollins work well together. Sadly, even they probably can't salvage a good match from the atrocious booking.


As bad as the title match stipulations are they aren't the worst on the show. No, no. That honour goes to Sheamus and Dolph Ziggler's "Kiss me arse!" match. Yes, Sheamus is being booked like 2006 Vince McMahon and demanding people kiss his backside. Ziggler versus Sheamus is a great addition to a wrestling show. 'The Show Off's' wild selling and Shaymo's all-too-convincing offense are a wonderful match. But it's going to be hard to enjoy their match knowing that ridiculous stip (or an angle excusing it) will play out afterwards.


Sheamus will very likely win because it's too early in his heel run for him to start losing. I really hope this doesn't become a regular part of his act. It's turn the channel heat more than it is the right kind of anti-Sheamus heat.


Speaking of the wrong kind of heat we have a Big Show versus Roman Reigns match. You can understand the logic here: the babyface who had the title won in the main event of the biggest show of the year gets rehabilitated by beating a big, bad heel in impressive fashion. The problem is that this is a very 80s approach. And we're not going to see the demolition job that would help Reigns out. Instead they'll have a mostly even match before Reigns snaps and rages out, Alex Riley style, on 'The Giant'.


What would be even better than Reigns making swift work of Show would be the match not happening to begin with. Big Show should not be a PPV regular in 2015. He should be working part time, at most. A mid-card guy could have benefited from being Reigns' rebound feud after 'Mania. Bray Wyatt's the obvious candidate and the likelihood is that he'll appear to set something up after Reigns has finished with Show. But someone else could have had Show's spot. Big E would have been good, especially considering the hatred crowds are showing for him and his New Day brethren. Stardust or Luke Harper could have worked too. These guys may not be as big as Big Show but they're more enjoyable to watch, and they'll be in a position to benefit the company in five years which Show almost certainly won't be.


Speaking of Luke Harper, he'll be in a street fight against Dean Ambrose. It's a feud that's come out of nowhere over the last few weeks with the two guys attacking one another for no real reason. It's sad that Ambrose, who was incredibly popular six months ago, has fallen this far down the priorities list. It's also sad that Luke Harper is just a guy who gets chucked into matches to lose to guys management have no other plans for. The match should be a lot of fun but both men deserve so much better.


Sticking with the theme of alternative Roman Reigns opponents for another paragraph, Big E will team with Kofi Kingston to challenge Cesaro and Tyson Kidd for the tag team championship. This could actually be one of the best matches of the night, so naturally it's been relegated to the pre-show. Cesaro and Kidd make a great team, Big E and Kofi have shown potential as a team, and the whole New Day act is, as touched on above, is really taking off as a heel act. A title change would be interesting to see and would allow Cesaro and Kidd to slip into the role of babyfaces, which I think would work better for them. New Day having the gold would also allow the Lucha Dragons to chase a team with some genuine heat to them.


Naomi versus Nikki Bella is perfectly sound on paper but confusing in terms of storyline. Naomi was a fun-lovin' valet a month ago. Now she's a narcissist who attacks people to steal their title shots. Meanwhile Nikki was Queen Mean Girl. The match has the potential to be fun because Naomi's very good and Nikki, as I seem to always write in previews and reviews, is underrated. I think they're going to suffer from not being quite as established in their flipped roles as they could be though. And I can see the Chicago crowd liking Naomi over Nikki because of the preconceptions linked to both women. A title change wouldn't be surprise me but I don't think it will come quite yet. It seems likelier for a three-way, also involving Paige, at Payback or Money in the Bank.

The final two matches both have something positive to offer. The first is the third instalment in the Cena v Rusev series. Truth be told it mostly looks promising in comparison to the rest of the card but we'll take what we can get at this point. They could do something with the Russian chain match gimmick they've got but it's not a sure thing. Personally, I'd have given Rusev and Cena the Last Man Standing stip and stuck Show and Reigns with the chain. That ways Reigns could have hammered Show at the opening to get his quick win and Cena would have been left to work the type of match he typically excels in.


Predicting a winner is tough, partly because we can't be sure of what the rules are. If there's a way for someone to lose without being pinned then I'd say the match heavily favours Cena as that would allow Rusev to take his second loss without taking another pin. I have an inkling that's what they'll be leaning towards. Cena's open challenges for the US championship have, surprisingly, been about the most consistently good thing on TV since 'Mania. With there being no obvious way for him to transition back into the world title picture just yet the challenge segment is likely to continue. To be fair there are worse uses of Cena, and not having the US title would free Rusev up to be shunted further up the card.


And no, I have no idea what sets a Russian chain match apart from any other kind of chain match. Maybe the chain's been blessed by Putin?


Finally there's the Intercontinental championship match, new champ Daniel Bryan defending against former five time champ Bad News Barrett. Being two good wrestlers unencumbered by poor booking this match should be the best of the night. They'll probably get a good bit of time and they have a good story behind them: BNB feels he has something to prove because Bryan didn't pin him for the strap and D-Bry wants to be a fighting champion who defends against anyone and everyone. If the commentary team do their job and emphasis this the match will be enhanced.


I'm leaning towards a Bryan win. The only reason I think Barrett would get win the title back right now would be is if Bryan is considered too much of a long term health risk, as was the case this time last year. That's possible, given his early return home from the European tour, but WWE are insisting he's fine (while remaining decidedly shady about why he went home early). It feels like this is the niche WWE want him in: holding what is traditionally the workers' title and making it mean something. If he's in a position they approve of I can imagine management being less inclined to send him home. Despite my declaration that Former World Champs Shouldn't Go Back To Mid-Card Belts I can't deny that this feels about right for Bryan. Away from the politics of the world title he can focus on his greatest strength, wrestling great matches, without worrying about being the best promo guy or carrying opening segments. I could really get into it if he hadn't won three world titles already. As it is I remain interested but frustrated.


I'd love to be wrong about Extreme Rules. I'd love it to be the best entry in the series or a contender with 'Mania 31 for best WWE show of the year. But it's not going to happen. This show will have things to enjoy but overall it will be a letdown. Which is annoying considering how promising the WWE landscape looked just a few weeks ago.