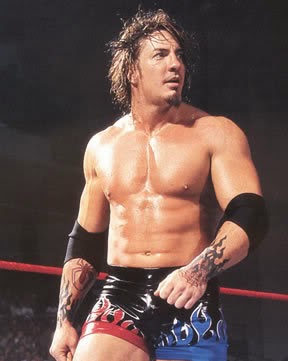 On Tuesday 9 September Sean O'Haire was reported dead. The following day the cause of his death was given as suicide. O'Haire had hanged himself in his home in Spartanburg, South Carolina. He was 43.


Back in 2000 I would do something pretty unfashionable for the time and watch WCW. Worldwide had a pretty enviable late afternoon spot on Channel 5 at the time and Nitro was shunted around very late night slots on Bravo. I'd tape that when I could. Overall the shows were unengaging and confusing, being heavy on nonsense storylines and past their prime names. But I watched it because I was desperate for as much wrestling as possible.


In amongst the paternity tests, pole matches and reformations of groups I was given no reason to care about were a handful of guys being presented as rising stars. Amongst them was Sean O'Haire. When I first saw him he was teaming with Mark Jindrak. By the time Worldwide was scrubbed from 5's afternoon line-up and Nitro became even harder to locate with a TV remote he was teaming with Chuck Palumbo.


Neither of these teams was amazing. The latter clearly had more promise because Palumbo was a more capable guy than Jindrak, which was the point of the shift. A constant across both pairs was the impressiveness of O'Haire. He was a six foot six inch dude who could do spin kicks and planchas and he used the Swanton bomb (dubbed the Sean-ton bomb because wrestler's are obliged to cram their name into move names whenever possible) as a finisher. Mixed with the more expectable power offence and a fair amount of energetic dashing about it was clear that O'Haire was a very athletic man who would go far in wrestling.


Sadly, he never did.


When the WWF purchase of WCW happened in the spring of 2001 O'Haire was one of the performers who made the move for the invasion storyline. It seemed a promising move. O'Haire had the size and look that the Fed traditionally liked in their featured stars. It was fair to assume that he would be a key player in the invasion storyline, especially with an increasing number of recognisable WCW names opting to sit it out in favour of continuing to get paid by AOL Time Warner.


Along with Palumbo he appeared on WWF television, wrestled at the InVasion pay-per-view, and entered a lopsided feud with The Brothers of Destruction. Palumbo and O'Haire lost the WCW tag team titles to Kane and 'Taker in a poor cage match on the August 9 2001 SmackDown. They never regained them. Worse still, they were dropped down the card with O’Haire ultimately plummeting to the developmental level, deemed not polished enough for the bright lights and heady highs of Monday Night RAW.


It's true that O'Haire (and Palumbo for that matter) were not as good as many of their peers but they were better than they had been a year before. They were also in an established team, which was helping to disguise their lack of polish. But that didn't matter. They were demoted.


O'Haire made his return in January 2003. He'd grown out his hair, gotten some more tattoos, adopted a spider motif for his tights, and taken to wearing a long leather jacket. He was also doing a devil's advocate type gimmick with the catchphrase 'Hey, I'm not telling you anything you don't already know.' It was a character that had potential to go somewhere and set O’Haire apart.


Unfortunately, through no fault of O’Haire’s, the character bombed. WWE clearly had no plans for it beyond the introductory vignettes and O'Haire found himself paired up with the washed up Roddy Piper. He worked in an enforcer role for a while, with the devil’s advocate aspect entirely forgotten beyond token remarks from the commentary desk, before Piper left the company and he found himself a regular on weekend show Velocity. Later in the year he was injured in a bike crash. He would return to action in OVW in February 2004. In April he asked for and was granted his release from the company.


I never saw O'Haire wrestle after he left WWE. He appeared for a few indies and apparently worked some New Japan shows, but he achieved nothing of note. He dabbled in MMA too, but didn't make much of an impression there either. He won't go down as one of the all-time greats, but he was never really given the chance to do so. He peaked early in WCW and WWE never did anything much with him after seemingly tiring of him during the invasion. I'll always think of O'Haire as a guy that showed promise and deserved more of an opportunity than he was ever given. But hey, I’m not telling you anything you don’t already know.
Posted by Dave at 17:31