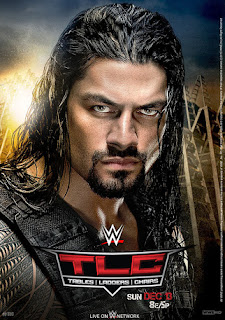 There are two things I want to more at the start of this preview. The first is that the show is sponsored by Toys 'R' Us. This is an example of why WWE went PG. They never would have got such a sponsor (and say what you want about Toys 'R' Us but they're a big retailer who pop the kids) without that rating on their product.


The second is that the show is to be held in Boston, Massachusetts. That's (pretty much) John Cena's hometown. That he's currently on a sabbatical filming a reality fitness show or getting married or finding himself or something was already a problem for the injury-heavy roster. Big Match John missing a PPV in Boston is doubling disappointing. There's always the potential to do something memorable with him there.


But let's not focus on what's missing. Let's focus on what we have. The hot new feud in WWE since November's Survivor Series? Roman Reigns versus Sheamus. No, it's not the most exciting-sounding programme WWE could have put together but it has avoided being actively bad. Shaymo comes as close to having genuine heat as anyone in WWE these days and works fine as a generic heel for the valiant Reigns to chase. It would be nice if we were getting something different to the tried and tested cowardly-paper-champion routine, especially as Sheamus could convincingly portray a bruising bully, but it's better than nothing. Marginally.


Reigns and 'Great White' have decent enough chemistry too. And while I'm not the biggest fan of Sheamus he does at least bring some variety to pay-per-view main events. It's nice to get a break from the seemingly never ending cycle of established headline names exchanging victories.


Pleasingly, it's found a use for Bad News Barrett and 'Don't Call Me Alexander' Rusev, teaming them up with world champ Sheamus as the League of Nations. The stable has a whiff of the mid-card about it but considering it's comprised of mud-carders that's both understandable and okay. I'm all for guys being given things to do.


The specifics of this feud are largely uninteresting. The only part that matters is that Sheamus is the man who "robbed" Reigns of his first WWE title and has been bragging about it since, even going so far as to slap a slogan on a T-shirt (the audacity!). Of course, Sheamus didn't rob Reigns. He used a contract that he'd won fairly in the manner in which it was intended. But this is WWE so they have to frame Reigns as the wronged party.


The match will benefit from a strong layout. We know that because keeping Reigns strong is still the company's priority. I'll be amazed if Barrett and Rusev don't interfere to give Reigns some fodder to blast through. That seems to be the sole reason the League of Nations was formed. Sheamus will almost certainly escape with the belt via shady tactics, setting up a rematch at Royal Rumble where Reigns can finally get a lengthy run as champ on the go.


The undercard is mostly comprised of decent-sounding but unspectacular matches. Dolph Ziggler and Tyler Breeze was rumoured and would have made sense but has been omitted from the card. Because WWE loves it's "everything remains even" booking, part of the reason so many members of the roster find it hard to build any momentum and generate a connection with the crowd, the likelihood would have been a win for 'The Show Off' because 'Prince Pretty' went over in their first PPV encounter.


But that match isn't happening so I'll note that the "evening out" logic also applies to Kevin Owens v Dean Ambrose. 'The Lunatic Fringe' pinned KO at Survivor Series. Owens' title wasn't up for grabs there, instead it was a spot in the finals of a world championship tourney. The standard practice of feuding wrestlers swapping PPV victories indicates a win for Owens, as does the fact that he's only had the title three months. It feels like he's die a long run as the IC champion, partly because he's got so much star potential and partly because I suspect that factions backstage want to rehabilitate that belt. Ambrose could win it here but I think he's more likely to get it in a rematch. Or possibly not at all, at least not from Owens.


The logic will probably not apply to Charlotte versus Paige. The reason for that is that 'The Nature Girl' is in the process of turning heel (following in the footsteps of Paige, who herself turned only a couple of months back). She's had an unspectacular face run and the chances are high that she's going to keep hold of the belt to see if she can improve her standing when she switches to the dark side fully.


I think she will. Charlotte got over in NXT largely because of strong booking and benefiting from working with superior wrestlers. She's got neither on the main roster and has found it tougher to connect because of it. Going bad will mean her slightly stand-offish nature is a strength and not a hindrance. It will also help her character make sense: boasts of genetic superiority do not a babyface make.


Paige v Charlotte could be good fun if they're given long enough and there's some interesting booking thrown in to play up Charlotte's new attitude. Paige is easily a good enough wrestler to get a good match out of Ms Flair.


Alberto Del Rio v Jack Swagger is mostly interesting because of the mess of a storyline it represents. ADR returned in October and was paired with J-Swag's former manager, light-hearted racist Zeb Colter. The two spent two months telling people they're all about MexAmerica (whatever that's meant to be) with Swagger popping up every so often to try to convince Colter to go back to his fun-lovin' racist ways. The really confusing part isn't that this got aired (this is WWE, far weirder stuff than this has been okayed over the years) but that Swagger was presented as the good guy despite being, essentially, pro-racism.


Either guy could win the match. I'll be bored to tears whoever goes over because Del Rio does nothing for me. I'll pick 'The All American American' to win because that'll free the reportedly highly paid Del Rio up for bigger and better things. Winning after interference from Uncle Zeb would help: ADR wouldn't suffer the indignity of a clean loss that way.


In a similar vein the Wyatt Family versus ECW Originals match is one that's hard to care about. Despite being one of the strongest characters in the company Wyatt is routinely placed into dreary programmes (not that this is big news or anything). His two feuds with The Undertaker this year have both been badly and this has been little better. 'The Eater of Worlds' has taken a dislike to the Dudleys for whatever reason and they've called in Tommy Dreamer and Rhyno for assistance. Which, for anyone familiar with the history of Dreamer and the Duds in ECW is jarring. For that matter Rhyno had little to do with either of his three teammates here. They're being held together by the love of a promotion that went out of business fourteen years ago.


This is a match that has powerful train wreck potential. In a perverse way I'll enjoy it the worse it is, because it's not something we can expect to be good by any reasonable criteria. The right result would be the Wyatt clan going over because they have more to offer the company in the future and Bray still has the glimmer of main event potential to him, but who the hell knows if we'll get that. They lost to 'Taker and Kane last month, and they have a combined age of 98.


The highlight of the line-up is the tag team championship match, New Day defending against the Usos and the Lucha Dragons. Iffy psychology aside (faces shouldn't outnumber heels in a triple threat unless under exceptional circumstances) this match should be fun. New Day are great, Kalisto is an ultra talented dude that deserves better than being half of a bit part tag team, and the Usos have now been around long enough to be acceptable as the veteran doubles squad that are a constant threat to whoever has the belts.


It feels like a change is due in the tag scene. Brief Prime Time Players reign aside New Day have had the gold since SummerSlam in August. There would be nothing wrong with them retaining but it feels like a good time for a switch up, if only for a while. While the Usos winning would prove them to be the constant threats I've said I feel they can be I think a win for the Lucha Dragons would be a better move. Getting a title onto Kalisto should be a priority. Having him as a former tag champ would make any eventual singles push that bit more meaningful of done right.


Ryback versus Rusev will also happen. If there's a less appealing bout WWE could add t this pay-per-view I'd love to hear it.