One week until Takeover: London. This was all about final bits of build for the key matches. And reminding North American Network subscribers that it's not the end of the world that they can't watch a show live in the evening for once.


Tweet 1: It's NXTime.
Tweet 2: These emotionally manipulative ads for JEWELLERY on the Network though.
Tweet 3: "Bull Dempsey deserves to be in the opening credits," said nobody ever.


Tweet 8: Cena-esque drop kick from Enzo there.
Tweet 9: Story of this match is Cass and Enzo have beaten this jobber team far easier than the tag champs did. Commentary have missed that.
Tweet 10: Food on tables promo here from Enzo. Great stuff.
Tweet 11: Such a fan of Cass waiting awkwardly to hit his catchphrase once Enzo decides he's done.
Tweet 12: "We WILL walk out the NXT tag team champions" - Big Cass, who's probably wrong


Tweet 13: Dana Brooke in a white top? #twothumbsup
Tweet 14: NXT > Japan, says Emma.
Tweet 15: I could believe Emma is a heavy smoker.
Tweet 16: "Scrunch down" - Dana Brooke, with another line I'd be a fan of hearing IRL


Tweet 17: The Asuka versus Dana and Emma feud isn't the best thing ever but I do like their issue being independent of the women's title.
Tweet 18: I don't like Deonna's chances for this match...
Tweet 19: Not least because she's wearing massive knee pads.


Tweet 20: Going to make the bold prediction that Asuka will debut new ring gear at Takeover: London.
Tweet 21: Oh no! Dana and Emma are standing on the ramp and Asuka is distrac- oh, wait, everything's fine. She just KOed that job girl.


Tweet 22: Imagine Mojo thinking 90s references will get him over with Vince McMahon.
Tweet 23: Things would be very different for them if Russo was still around. 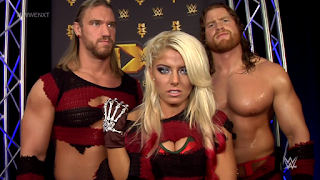 Tweet 25: That's a singles run waiting to happen. Give it time...
Tweet 26: Anyone done any fanfic about Alexa's Goa'uld hand thing yet? Asking for a friend.


Tweet 27: Mojo and Ryder are a good fit as partners but you still have to feel for Ryder. Got himself over and this is his reward.
Tweet 28: Liking the Dennis the Menace colour scheme on BAMF.


Tweet 29: The physiques on Mojo and Blake though.
Tweet 30: Really enjoying the heel shenanigans of BAMF. Shocking display as Alexa gets lifted up by Blake to kick Ryder in the head.


Tweet 31: Mojo Rawley is a sweaty lad.
Tweet 32: Hoping Blake and Murphy win this. Feel like the Hype Bros will though.
Tweet 33: They won immediately after I pressed send FFS. I get it. Heel tag champs need fave challengers. Still, BAMF deserve better.


Tweet 42: This Nia Jax and Eva Marie pairing being a lasting thing is a great decision. This heat is manager heat.
Tweet 43: Standing at ringside to get booed. That's how to book Eva Marie.


Tweet 44: Casual chat between Apollo and Finn in front of a camera here.
Tweet 45: #unfinishedbusiness
Tweet 46: I want Finn Bálor to be booked as an increasingly paranoid champion, like Austin in 2001. Doing backstage skits where he sings and that.


Tweet 47: Barry and Joe tagging out against their rivals and it being framed as tremendous use of mind games is hilarious.
Tweet 48: Crews v Joe will be a good thing for NXT when it rolls around.
Tweet 49: Barry, you're not even taping your wrists, mate. What have you become?
Tweet 50: If this match ends with Joe choking out Finn then Finn retains next Wednesday.
Tweet 51: Could see Apollo or Barry taking the pin though TBH.
Tweet 52: Barry Corbin should get a new gimmick where he makes reference to being a werewolf every so often.
Tweet 53: Bálor falls to the Coquina clutch. So he'll retain the title. Because that's how WWE works. And NXT, despite what it gets right, is WWE.