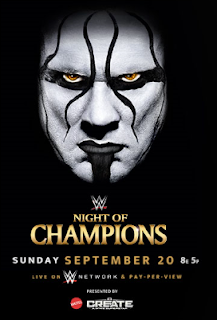 Do you like title defences? If so you'll love Night of Champions. It's the WWE B level pay-per-view where every championship is defended in a match, which somehow sets it apart from all those other WWE pay-per-views where all titles are defended. Plus there are bonus matches that don't even involve titles at all! WWE is truly spoiling us.


With every title being defended double champion Seth Rollins will make two appearances at this event. He'll defend the WWE championship against Sting and the United States championship against John Cena. The US title match is expected to go on last. Considering the respective ability of Sting and Cena I think that's the right call. 'Big Match John' is clearly more capable of delivering a satisfying main while having Rollins face 'The Icon' first will ensure he's fresher, all the better to carry the ageing former WCW headliner to something passable.


I'm fully expecting Cena to regain the US belt. Keeping Rollins a double champ doesn't seem feasible long term and it's tough to envisage Sting wandering out on RAW with the world gold. It's by no means impossible, there's ample time for Rollins to drop the belt to someone and give them a short reign before he regains it and drops it to Reigns. That someone could easily be Sting. Rollins versus Reigns is the obvious big match for WWE to be building to but there's time for them to surprise us before they get there, basically.


There's a way for all three guys to come out of this show looking good. If Sting v Rollins took the semi-main spot then Rollins could cheat to win a fifteen minute match and sell exhaustion as his US defence kicks off. This would keep heat on 'The Future' for cheating in another title defence, protect Sting by not having him lose clean, and make Cena look strong for giving the heel his comeuppance, with Rollins being protected in his second match because he's wrestled back to back defences. Instead of this I suspect Rollins and 'The Stinger' will open the show and that WWE will go with the same story suggested above, though it won't work anywhere near as well with Rollins having a few hours to recuperate between bouts.


The other gents' single strap will be defended by Ryback against Kevin Owens. It's a match that has the potential to be hossy excellence. It's quality will ultimately be determined by whether or not Ryback's on form. As a character he's always gold, face or heel, but his ring work can vary. Owens will definitely carry his end of things. Expect his usual big match arsenal of fishermanbusters and double jump moonsaults. I'll be surprised if 'The Big Guy' doesn't get to kick out of at least one of Owens' power bomb variants too.


I'm torn on a winner for this match. Ryback is still very much one of the company's projects, a lad they're determined to get over. It's the reason he got the IC strap in the first place. But Owens very clearly has top line potential himself and is a better worker with (seemingly) a more passionate following than big Ry'.


I'm leaning towards an Owens win. I've been predicting Ryback wins since he won the belt on the basis of it not feeling like time for a change. Now it's beginning to. If WWE are serious about wanting their championships to mean more (and the booking of the US title since WrestleMania indicates that they do) then Owens would be a good man to put it on. Of course, successfully defending against Owens could really help to legitimise Ryback's title reign. So there's that.


Over in the tag division New Day will defend the titles against the Dudley Boyz. Given the New Day's table-themed protest against the Dudleys immediately after their return and the lack of gimmick matches on this show it's surprising that this isn't a tables match. I suppose that could change before the event or even on the night. If it does I expect Bubba and Devon will leave as ten time (WWE) doubles champs. If it doesn't then I could see New Day winning in order to set up a rematch for the MSG special or Hell in a Cell in October.


The match will be great. Because New Day. In fact it'll be great because of the Dudleys too. They've been great since their return to the company last month. Bubba has proven he was entirely wasted as Bully Ray in TNA. Not that that's news to anyone.


The evening's other tag match will be a six man. Dean Ambrose and Roman Reigns, the two man Shield, will once again pair up to tangle with the Wyatt Family. It's the stables rivalry that will never end, which, in a way, is part of why it's so special. The guys involved can always slip into a programme based on their allegiances to these groups. It's the sort of thing that works so well in wrestling.


The Wyatts will be represented by Bray, Luke Harper and new boy Braun Strowman. A mystery partner has been teased for Ambrose and Reigns. The list of potential partners seems pretty short. Randy Orton was attacked by Bray and co on the 7 September RAW and was shown talking to Reigns and Ambrose later in the evening so he'd be a logical choice. Erick Rowan had reunited with Luke Harper before he suffered an injury in June but it's possible he could return to oppose them citing jealousy over Braun Strowman bring brought in. That sounds an underwhelming and slightly silly reason for a face turn but WWE have offered far less in the past. Personally I'd like to see Cesaro as the mystery partner. It wouldn't make much sense but he's not booked and he can wrestle his socks off (possibly literally).


I suspect we'll get 'The Viper' as the third man though. Although he's boring a lot of the time he'd be perfectly watchable here. Sharing the ring with five other men would limit his screen time and allow him to hit his key spots without doing much else. That's pretty much ideal for him.


The current incarnation of the feud (which started back at Money in the Bank in June) is tied at one win each. 'The Eater of Worlds' defeated Reigns at Battleground. Reigns and Ambrose picked up a tag win over Wyatt and Harper at SummerSlam. Assuming this is the final match in the series I'm predicting a Reigns, Ambrose and mystery partner victory here. Reigns needs to be kept strong for the WWE title win he's getting sooner or later. That said I'd love to see the Wyatt Family win after interference from a returning Rowan or, better yet, a debuting Sister Abigail.


Also announced for the show are Dolph Ziggler v Rusev and Adrian Neville and the Lucha Dragons v The Cosmic Wasteland. I've got little to say regarding Ziggler, Rusev, Lana and Summer Rae. The story seems to be deliberately emulating a trashy soap plot. This is fine and something wrestling can parody very well. Sadly nobody involved is going as crazy with their material as they need to to make it work. I'll hope Lana swerve turns on 'The Show Off' to reunite with Rusev.


The six man match will be on the pre-show. I don't usually cover those but I love this Cosmic Wasteland thing so much that I just wanted an excuse to mention it. Stardust has been a highlight of WWE since his issue with Stephen Amell became A Thing and casting The Ascension as his henchmen was a stroke genius. They look good together, it gives a previously aimless team something to do, and it helps 'The Prince of Dark Matter' seem that bit more of a threat. No logical analysing here, I want them to win.


Finally there's Nikki Bella's Divas title match with Charlotte. This match originally took place on the September 14 episode of RAW with the story on that night being that Charlotte wanted to win not just to become the Divas champion but to stop Nikki becoming the longest reigning champ in history. We got a Dusty finish. Charlotte was announced as the victor and new champ, Ric Flair nigh on teleported down to ringside to get in some celebrating with his daughter, then it was revealed that Charlotte had pinned Brie. The match was restarted and Nikki got in a pin to retain her title and shatter a record.


The reasoning behind this sequence was beyond reproach. Nikki cheating to win in the manner she did is a long established character trait. Stealing the title from Charlotte's grasp is the perfect way to get heat on a heel. The trouble is that so much leading up to the match had been haphazard. Nikki had flitted back and forth between face and heel. The Divas Revolution story, while entertaining and definitely movement in the right direction, had not produced that many truly memorable or meaningful matches.


The good news is that the NOC rematch has been announced with stipulations that favour a fair fight. Nikki can lose by DQ, ruling out any heelish shenanigans. Things are set up for a Charlotte victory and Sasha Banks has been surreptitiously readied as her first challenger with clean TV wins over former champion Paige and a subtle restructuring of BAD to make it clear that 'The Boss' is... well, the boss. Nikki is unlikely to regain the title after losing it to Charlotte but she can float around near the top of the division as a perennial challenger, her longest reign ever giving her something to crow about and helping portray her as a legitimate contender.


If Charlotte doesn't win at Night of Champions WWE will have to go back to square one with their Divas division. I don't think they want to. I'm confident enough people backstage understand that Sunday needs to be Charlotte's night.