The most interesting thing about this week's NXT was not the beginning of the Dusty Rhodes Tag Classic or the returns from The Ascension and Adrian Neville that it facilitated. It was a backstage segment in which William Regal was shown talking to Johnny Gargano and Tommaso Ciampa before being interrupted by Tyler Breeze. Seemingly minor at first glance this scene could actually have been a hint at the new direction for WWE's feeder system-slash-satellite indy fed.


Gargano and Ciampa broke the rule that's been established regarding performer's using non-rademarked names. Yeah, Samoa Joe stayed Samoa Joe after his debut but he's a far bigger deal than either 'Johnny Wrestling' or 'The Sicilian Psychopath'. For two guys who are nothing more than very talented indy wrestlers to retain their own names on WWE screens hints at a new approach from the company, one that doesn't see guys immediately rebranded but instead makes use of what meagre (in comparison to WWE's established talents) name value performers may have.


For outsiders to be brought in to play a part in the DRTTC is a significant step too. It's another indication that WWE is loosening up. The pair are unlikely to win the tournament but the fact that they're facing the odd couple team of Tyler Breeze and Bull Dempsey makes it pretty clear they'll be getting at least one win. This scene would be rendered pointless were they to lose their opening match. William Regal acknowledging that the pair are veterans of the independent circuit (as opposed to men who have competed "around the world") is a bold and interesting new way of debuting guys.


It's also worth noting that the responses for the matches involving The Ascension and Neville is proof that if guys are just allowed to wrestle and be themselves more they can connect with crowds better. That in turn allows them to become more over, which makes everyone more money (the aim of the wrestling game, obvs). Nev's made headway on the main roster but Konnor and Viktor have floundered badly. Had they been afforded the opportunities to act more as they did here when they debuted on RAW at the start of the year they'd have better spots than lackeys for Stardust.


Tweet 3: Graves talking about the return of The Ascension being a great way to start the show. I'm just thinking about how they're Cody's henchmen.


Tweet 4: Ascension v Barry Corbin and Rhyno. Hoss extravaganza. Although that's being pretty generous to Barry.
Tweet 5: Assuming The Ascension lose to give Barry a win over meaningful names (in NXT).
Tweet 6: Rich Brennan saying Viktor's bounced back. #accidentalPartridge
Tweet 7: Not at all surprised by that result because I called it. I am surprised Rhyno got the pin on Konnor though.
Tweet 8: Barry over Viktor was the way to go.


Tweet 11: I miss Alexa Bliss's glamour fairy music. Bliss as a heel makes up for it though.
Tweet 12: When did Alexa join the Hart Foundation? 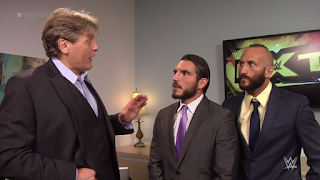 Tweet 16: Looks like Ciampa's fresh off the set of that Kray brothers film.
Tweet 17: Breeze and Bull Dempsey versus Gargano and Ciampa. They should've paired him with Miz.
Tweet 18: 'Look into the camera and say Breeze' - Tyler Breeze


Tweet 19: Emma rightfully pointing out that she and Paige really got the NXT women's division underway. Great stuff.
Tweet 20: That was needed considering she's an anchor for the division now.


Tweet 22: These ratty jeans on Stone though. Dear lord.
Tweet 23: I remember being at Stone's first RPW show post-release. He cut a promo about being under-utilised and that. Look at him now.
Tweet 24: My point? Did the I was under-utilised act for a cheap pop. Not knocking him. Just observin'.
Tweet 25: Apollo won btw.


Tweet 26: I'm a big fan of Chad Gable. He could go far in WWE. Don't want this amazing tag team rushed though.


Tweet 27: Oh yeah, Finn Bálor's the champion and sometimes appears on this show.
Tweet 28: He's hyping house show defences and a sports entertainment renaissance. My word...
Tweet 29: So Joe versus Finn then, yeah? I'm down.


Tweet 30: Billie Kay got the 'already in the ring' treatment. She's defs winning!
Tweet 31: Astounded to hear an Eva Marie chant.
Tweet 32: Lol at Eva not even bothering to sell a kick to the face and instead lying down looking blank waiting to get back on the attack.


Tweet 37: Big Nev's main roster entrance is what's got him these cheers. That and the absence of a first name.
Tweet 38: Tremendous fluidity between Neville, Gable and Jordan. This is liquid wrestling! #deliberatePartridge
Tweet 39: Jordan's taken his straps down. Shit's about to get real.
Tweet 40: Rich Brennan is a very good play-by-play guy. Easy to overlook. He mixes the usual WWE style with actually calling matches.


Tweet 41: So Crowe tagged in and got pinned. Graves mentioned him being a glory hog. He wasn't: Nev was out of it. Makes sense as a concept though.
Tweet 42: Good show, everyone. Good hustle.
Posted by Dave at 20:00