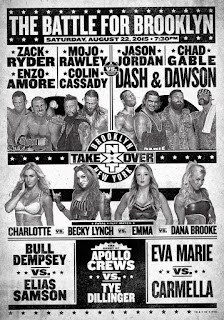 In addition to broadcasting the Takeover: Brooklyn special live on the WWE Network the NXT crew also recorded a selection of matches for an extended TV episode over SummerSlam weekend. Of the four matches on offer the four-way women's match was, predictably the best of the bunch. It not only featured some of the most over wrestlers on the roster but some of the most motivated and talented too. Becky and Charlotte presumably understand they won't get to wrestle the sorts of matches they've become accustomed to for much longer and made the most of it here.


Of the other three matches the eight man tag was the standout, mostly because it was so busy that there was plenty for the guys to pack in. It didn't hurt that super-over (not actually) hometown boys Enzo and Big Cass were involved either. Eva Marie v Carmella got time to be good and wound up as inoffensive, which all things considered is probably quite the accomplishment. Meanwhile Bull Dempsey versus Elias Samson was a peculiarity more than anything else, featuring the newly slimmed down Bull Dempsey looking exactly as big as he was before he was handed his humiliating overweight lad gimmick and Elias Samson debuting a character out of the blue. Okay, it wasn't much of a character but it was something that could get him somewhere at some point.


Tweet 1: Going to watch the NXT hour-and-a-half regular episode spesh.
Tweet 2: Considering the extended time I'm going to try and pace myself. Not sure how that will work out.


Tweet 3: That Enzo pop was something else though.
Tweet 4: Not crazy about Zack Ryder and I actively dislike Mojo but it is nice to see that they've got themselves actual team gear.


Tweet 5: Enjoying Dawson and Wilder essentially being the New Brainbusters here.
Tweet 6: Incredible to think that Ryder is the veteran of this match.
Tweet 7: 'The New and Improved Real Double J' Jason Jordan wrestling in those ankle-height amateur sneakers exposes the business.
Tweet 8: Heart that one arm monkey flip from top lad Chad Gable.
Tweet 9: Why isn't the crowd booing Mojo please?
Tweet 10: That was a fun match. Gable and Enzo made it work.


Tweet 11: #Regalpop
Tweet 12: Regal rocking up to remind us about the Dusty Tag Classic. 'Don't Call Me Adrian' Neville rudely interrupting to ask for a spot.
Tweet 13: Then they did a little handshake. #CodeofHonor
Tweet 14: Wish there had been a time in the mid-00's when Regal was free to hit up ROH. That could have been excellent.


Tweet 15: Recap of Emma embracing the dark side of the force here.
Tweet 16: Her new look and new music are both great. Just saying.


Tweet 17: Good lord this Charlotte and Becky promo is bad. They're delivering poor lines poorly. Just let them be themselves, lads.
Tweet 18: Love that Dean Cain's career has become such a mess that he's starring alongside Big Show in WWE Studios straight-to-DVD films.


Tweet 19: "What makes Becky Lynch special is personality" - Becky Lynch
Tweet 20: If you're a submission specialist in WWE it basically means your finisher is a submission hold.


Tweet 21: Eva Marie's been pilfering Ric Flair's wardrobe again.
Tweet 22: Looking forward to Eva swerving us with a twenty minute classic here.
Tweet 23: No idea how people don't find Carmella's character massively irritating. If she was on a Made in Chelsea type show she'd be a heel.


Tweet 24: That the whole MIC shtick is her gimmick should make her a heel here.
Tweet 25: Good moonwalking skillz though.
Tweet 26: Eva shrilly working the crowd while being out of breath. Brilliant.
Tweet 27: Leonardo Marie winning with the Sliced Bread No. 2 there. Some of the people in the crowd seemed to want to pop for that.


Tyler Breeze announces that he has a challenge for William Regal


Tweet 28: Breeze calling out Liger for having to still wear a mask. Except in pictures with Kevin Nash, obvs.


Tweet 29: Emma talking about being dominant. Oh my.
Tweet 30: Why isn't the four-way just a tag match? Wouldn't that make a lot more sense?


Tweet 31: Regal again. Still talking up this Dusty Classic.
Tweet 32: Barry Corbin in the tournament. My word. All the big names.
Tweet 33: Calling it now: Tyler Breeze will wrestle either William Regal or Doug Williams at the Takeover in London.


Tweet 34: What is this gimmick on Elias Samson?
Tweet 35: This has "lower card ECW guy" written all over it.
Tweet 36: Hilarious that the Brooklyn crowd didn't pop for Bull Dempsey until the ring announcer reminded them he's actually from Brooklyn.
Tweet 37: Bull Fit could be the new DDP Yoga.


Tweet 38: Nice that WWE are making the most of the extra half hour on this episode. Everyone wanted to see Elias Samson versus Bull Dempsey.
Tweet 39: Bull Hulking up there. That doesn't mean he's being racist.
Tweet 40: Polite applause for hometown winner Bull Dempsey.


Devin Taylor talks to the BAMF


Tweet 41: "You're here to ask them how they feel?" - Alexa Bliss to Devin Taylor, after Devin had just asked that
Tweet 42: Blue Pants v Alexa Bliss has potential. Needs Blake, Murphy and the 'villains at ringside for max shenanigans.
Tweet 43: Strip out the ads and the majority of the hype videos and this could have been a regular length NXT episode.


Tweet 44: Dana Brooke's entrance needs more flips.
Tweet 45: Surprised by the rowdy reaction for Becky Lynch. Not because she's not over or anything but because it didn't happen at SummerSlam.
Tweet 46: Imagine how different Charlotte's act would be if she patterned herself after her husband instead of her dad.


Tweet 47: "You wanna be a Barbie?!" - A seemingly outraged Dana Brooke to Charlotte
Tweet 48: Has Charlotte expressed an interest in being "a Barbie"? Doesn't seem like her vibe tbh, Dana.
Tweet 49: The heels are teasing a fall out? WHO COULD HAVE SEEN THIS COMING?!
Tweet 50: Emma v Dana happens... not now.
Tweet 51: Loling at the amount of posing in Dana's act.
Tweet 52: Becky Lynch v Eva Marie won't be happening any time soon. Because women in WWE aren't allowed to share hair colours.
Tweet 53: Unless they share a surname, like the Bellas. Then it's fine because of genetics.
Tweet 54: That ending looked a bit botched. Don't think it was though.
Tweet 55: Right decision having Emma win. She's the one staying in NXT and should make a good challenger for Bayley. Plus she's better than Dana.


Tweet 56: Is Dana's name a rib on Dana White?
Tweet 57: Charlotte and Becky tapping out the heels after the bell. I get keeping the audience a happy and everything but they look like sore losers.
Tweet 58: Very good show that, considering the pre-show nature of it. Good hustle, everyone.
Posted by Dave at 11:23