This show was headlined by the first WWE singles match between Samoa Joe and 'The Man Beast' Rhyno. It was a fun big lad encounter but the real highlight of the programme was Charlotte versus Bayley. Not only was it a better match, and slightly longer, match but the story behind it was better. Rhyno and Joe were facing off because of some fairly convoluted stuff involving Finn Bálor and Kevin Owens that happened a few weeks ago.


Bayley and Charlotte were facing off because Bayley had never beaten Charlotte in a (televised, which is where it counts as far as WWE's concerned) bout and felt that she needed to achieve that feat before mounting another challenge against women's champion Sasha Banks. The usually slick commentary team did a terrible job of explaining this but that didn't discount the importance of the meeting or the two years of history to it (the pair first met in a televised match in June of 2013).


Tweet 1: Oh hai, everyone. I'm going to watch NXT right now and do some tweets about it and that.
Tweet 2: Charlotte's Titantron video is just her name in capital letters with different coloured backgrounds. Bit rubbish, innit?
Tweet 3: She's been on NXT for a couple of years now. They should have enough footage to cobble something better together.
Tweet 4: Give it to one of those tech studios as a project or whatever.
Tweet 5: Video thing is probably true of most NXT wrestlers. Bad with Charlotte because she's all #mainroster these days.


Tweet 6: Charlotte v Bayley. Code of Honor: activated.
Tweet 7: Has a wrestler ever worn Wellington boots as their gimmick? Looked like Bayley was for a second there.
Tweet 8: Big fan of the cartoon characters on the sides of Bayley's tights.
Tweet 9: Commentary team doing a rubbish job of talking up the history of Bayley v Charlotte.
Tweet 10: The point of this match is that Bayley needs to win to feel validated and ready to challenge for the women's championship again.
Tweet 11: Lovely bit of spot calling from Charley there.
Tweet 12: Charlotte gets a spear. Roars instead of going for an immediate pin. Probably would've won if she'd been quicker tbh.
Tweet 13: That backslide exchange into the Bayley-to-belly was nice.
Tweet 14: Charlotte no-selling finishers and German suplexes like an absolute beast.


Tweet 15: Good match that.
Tweet 16: Waiting for Rhyno to come out and Gore Bayley, setting up his next feud.


Tweet 17: Sit down interview with MAGGLE COLE. Yes!
Tweet 18: Clever use of pre-tapes over the last few months on NXT. Gets them up to an hour without tiring out the crowd.
Tweet 19: Owens wants the NXT title as a trophy for what he did to Zayn and for cash. Hashtag heel motives right there from Big Kev.
Tweet 20: Montreal Screwjob Klaxon.
Tweet 21: And with that comment Owens sets up a storyline screw job in a few years.
Tweet 22: Ladder matches. Very different to bladder matches.
Tweet 23: 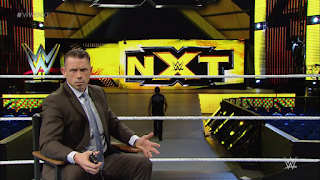 Video about Bull Dempsey working out


Tweet 26: Ambassador, with these Barry Corbin squashes you are spoiling us.
Tweet 27: Steve Cutler has a bit of a Mike Mondo thing going on.
Tweet 28: Cutler's Mondo mode was no match for Barry's Wolf Magicks.


Tweet 29: OMG it's Tyler! *swoons*
Tweet 30: Immediate mud hole stomping from Breeze. Why do the commentators never impersonate JR when he does that?
Tweet 31: Actually, scratch that. Wrestling doesn't have a good track record of Jim Ross impersonations.
Tweet 32: Breeze brushing up on his squashing skills. Maybe he'll get a match against Barry Corbin. Squasher versus squasher.


Tweet 33: Official announcement of Jushin Liger as Breeze's opponent followed by a predictably strong video package explaining why he's a big deal.
Tweet 34: This is the sort of thing WWE does so well when they bother.


Tweet 35: Remember when they ran vignettes about Uhaa Nation signing then he disappeared for a bit.
Tweet 36: Uhaa moonsaulting a camera there for some reason.


Tweet 37: Saddened that Finn Bálor has been lumbered with Byron Saxton for this interview. Because Byron's rubbish.
Tweet 38: Next time have Corey Graves do this.
Tweet 39: Byron just refusing to react to anything Bálor says here ffs.
Tweet 40: Big Kev wants a ladder match but THE CONTRACT HAS ALREADY BEEN SIGNED.


Tweet 41: Zack Ryder trying to control Mojo's hype levels. Never going to happen, Zack. Nobody can de-hype Mojo.
Tweet 42: High waist band on Mojo there. Got a real Zangief feel to him.


Tweet 43: Give it a few years and Mojo's hyped act will be established enough that WWE can run a substance addiction angle with him.
Tweet 44: "He's hyped because of the stuff he snorts" would be the gist of the story. The harrowing downfall of Mojo Rawley.
Tweet 45: Have Dawson and Wilder announce their new team name as the Shatter Bros as a knock on the Hype Bros. Year-long feud off that.


Tweet 46: Regal and The Vaudevillains are sharing a screen. Feels like there's a lot of potential here.
Tweet 47: Are Gotch and English going to recruit a bearded lady? Is that where this is going?


Tweet 48: Bull Dempsey doing a work out here. Cool handshakes with the hot chick. Nod of approval from the built cool lad.
Tweet 49: Finish off on Bull being made to flip a Really Big Tyre because of peer pressure. What sort of message does that send?


Tweet 50: Samoa Joe v Rhyno for the vacant NXT hoss championship.
Tweet 51: Meaty slaps on these shoulder tackles.
Tweet 52: Imagine wishing Joe had stayed in TNA to be in the BDC.


Tweet 53: Rhyno's shin has been busted open hard way. Joe will be labelled unsafe by Vinnie Mac for that.
Tweet 54: "RHYNO DRIVER!" - Rhyno
Tweet 55: What is a Rhyno driver please?
Tweet 56: A match chock-full of hossy goodness that.
Tweet 57: Good show, everyone. Good hustle.
Posted by Dave at 18:54