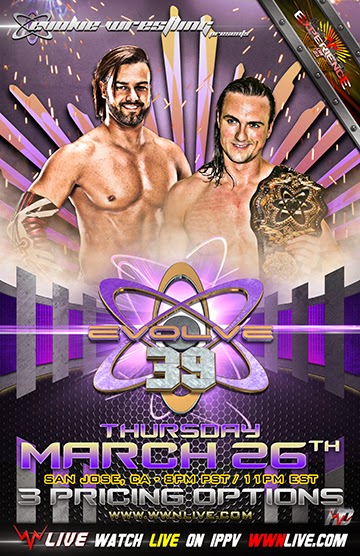 EVOLVE 39 had the task of kicking off the WWN's schedule of WrestleMania Weekend shows. That's not an easy spot. The group of promotions push the boat out for 'Mania weekend every year and 2015 has been no exception. EVOLVE 40 will boast PJ Black v Ricochet, Ronin v the Premier Athlete Brand and Hero v Busick while Saturday's Mercury Rising event (dubbed a supershow, so you know it's serious) will feature Galloway v Gargano, the reunion of Generation Next, and Hero v Thatcher. There was also external competition with Ring of Honor's Supercard of Honor IX.


It would have been easy to assume that EVOLVE 39 offered little, the bigger, better matches being held off for the cards later in the week. Happily this wasn't the case. The promotion's thirty-ninth show was an enjoyable experience with a solid list of match-ups on offer.


The show kicked off with Timothy Thatcher versus Drew Gulak, with Gulak talking about how he, Thatcher and Busick want to reinvigorate real wrestling before the match. That's something that he did at EVOLVE 38 and I imagien it's going to go somewhere soon, possily later this weekend. I enjoy these sorts of matches but they're tough to transcribe because so much of them is exchanges of amateur style holds which I can't name. That's why I generally skip to the finish of them, as I'll do here. Gulak won a tidy opener with a crucifix roll-up after a brisk exchange of submission hold attempts.


The debuting Tommy End was out next for his match opposite Biff Busick. He's a striker with a penchant for kicks. It was a much faster match than the opener and would have been better in that spot (though I understand the decision to kick off with two known quantities). End got the advantage early on and gave Busick a battering until he got walloped with an uppercut and a half Nelson suplex. End fired back with a bicycle kick but got put down with a lariat.


Back on their feet End put Busick down with an impressive bicycle knee strike. Busick rolled out of the way of the attempted top rope double stomp and returned to his feet to be struck with more kicks. After plenty more striking Busick rolled End down to the mat with his headlock takeover and applied the half stranglehold. End passed out and Busick won.


After the match Busick took a microphone and said he'd choked out Chris Hero's endorsement then promised to do the same to Hero at EVOLVE 40. This earned Busick a smattering of boos before he took a leaf from Hero's book and wandered off through the crowd. End was given a deserved round of applause as he headed to the back. It was a good match from him. He's definitely someone worth bringing back.


Match three pitted Chris Hero against Ethan Page. It was a fun match, featuring the usual Chris Hero blend of strikes and aggressive veteran tendencies. Page mixed in some humour towards the start for good measure. Neither man had the advantage for too long, which helped Page to look competitive against the far more established 'Knockout Artist'. Hero got the win with a rolling elbow.


After the match Hero took a microphone and talked about guys using his name (which was the starting point for his rivalry with Biff Busick). He said he wasn't scared of Busick or his choke hold. Busick returned to the ring and told Hero he'd choke him out at EVOLVE 40 then offered Hero a free shot to "prove" the elbow wasn't powerful enough to knock him out. Hero teased it before saying no because he was looking forward to beating Busick and he wouldn't be able to if he concussed him before their match. Hero went to leave but Busick pulled him back in. They had a tussle where Hero found his elbow reversed into the stranglehold, forcing him to slip out of the ring and retreat. As a segment to refresh everyone on the Hero-Busick issues this was good.


Match number four was the six man tag team match. The new-look Premier Athlete Brand of Caleb Konley (still half of the Open the United Gate champions, in case you'd forgotten), Brian Cage and TJ Perkins took on Rich Swann, Ricochet and Uhaa Nation. The PAB had So Cal Val and a stereotypical Amazonian bodyguard Andrea with them. Swann did his usual blow-up-the-crowd-so-they're-less-responsive-for-the-match routine, but it's over so that's acceptable apparently.


I'd expected the match to be a series of high spots. It was more than that. There was comedy early on (mostly dancing-based) and plenty of very fluid wrestling linking everything together. That said the six lads didn't disappoint on the high spots. Highlights included: a cruiserweight exchange between muscle boys Cage and Uhaa (including a 619 from Cage); duelling power spots between Uhaa and Cage, using their smaller opponents for delayed press slams and stalling suplexes; a sequence in which Ricochet wiped out both Konley and Perkins before being bounced to the mat by Cage; Nation catching Konley on a springboard dive and turning it into a Samoan drop; a great Gory special into the O Face by Konley to Swann; a trio of dives from the ring to the outside by Swann, Nation and Ricochet; a solo twirling tope by Ricochet to Cage; and the match winning sequence of a Swann 450 and an Uhaa Combination on Konley.


The match was very good. I'd expected it to be with Nation, Ricochet, Swann, Perkins and the underrated Konley involved. I hadn't expected much from Cage because he looks like a generic muscle guy but he proved to be very agile and solid on crowd interaction. If he improves his timing he could go somewhere.


Uhaa and Swann danced after the match before Andrea low blowed them both and Cage and Konley gave them a beating (including an always popular title belt shot from Konley). Because heels, am I right? TJP didn't join in with the attack and got a telling off from Val. His response was to walk out. The Brand left in a huff.


The penultimate match of the card was for the Open the Freedom Gate championship, Johnny Gargano defending against AR Fox. Gargano had Ethan Page with him at ringside, because Sapolsky adores the concept of young guys paying their dues as the understudies of established stars. After a nippy feeling out exchange the two progressed to the bigger stuff when Fox bicycle kicked the champ and they headed outside for the prerequisite ringside excursion.


Gargano took control when they returned to the ring. Fox turned the tide after a few minutes with a missile drop kick and a bicycle kick. The action spilled outside the ring again as Fox tried to hit topes. Gargano countered each attempt before hitting a senton from the apron. The slingshot DDT scored him a two count on the challenger.


Gargano tried the Hurts Donut but 'The Whole Foxin' Show' countered into a roll-up before leaping to the top rope to hit a Swanton bomb. When Gargano kicked out Fox attempted a 450 splash. Gargano moved so Fox landed on his feet. Because athleticism. Gargano hit a double stomp to the back of the head and a power bomb for two. After an exchange of elbows the two ran through super kicks, enziguris and other related strikes, the champion getting the last word when he put Fox down with a discuss clothesline.


Fox tried leg dropping Gargano on the apron. Gargano moved and hit Fox with a suicide dive which, in a scarily unplanned moment, sent the pair sprawling into the audience. Luckily everyone seemed to be fine. Fox countered a spear with a kick to the head, following up with a Canadian Destroyer for two. A Low Mein Pain attempt was broken by a shove, with 'The Whole Shebang' immediately hitting a buckle bomb and the lawn dart for a two count. Moments later Fox managed to get him with the LMP and a 450.


Gargano kicked out. After more super and yakuza kicks Gargano got a Hurts Donut on Fox from the top rope. The challenger kicked out of that but immediately found himself trapped in the Gargano Escape, tapping out to end a great match.


At that point Lacey made a surprise appearance to ask Gargano about his (potential, at this point) unification match at Mercury Rising. 'The Whole Shebang' promised he'd be the man to win both belts. Well, he would say that wouldn't he?


The main event was a match you would at one point have had to tune into Superstars to see: PJ Black v Drew Galloway for the EVOLVE championship. That this is something that can be said (that they were little more than job guys in WWE) was likely a deciding factor in making the match in the first place. I imagine it's also something that motivated both men. It was a chance for them to show exactly what WWE missed out on by not giving them more opportunities to just get in a ring and wrestle on TV.


They easily surpassed the standards set by the quality of Superstars matches. They told the story of Galloway's power against Black's speed as Lenny Leonard did a great job of talking up their shared history. Which, incidentally, isn't limited to WWE. They first met at an FWA training school in London in 2001. It was very likely the one advertised on the old TalkSport show which Alex Shane made a massive thing of pushing (understandably). Black survived big boots, power bombs and ringside brawling before falling victim to Galloway's double underhook DDT.


Lacey returned to the ring to discuss the title versus title match on Saturday. Galloway initially no-sold that to thank PJ Black for the match and put over the importance of WrestleMania Weekend, ultimately deciding to rename it Wrestle Week (yeah, that'll catch on). Much like DGUSA title holder Gargano, Galloway promised he'd be the one holding both titles at the end of Mercury Rising. Unlike Gargano he offered a little more than a mere promise as reasoning, stating that he didn't want his eight months of hard work establishing himself as a hard-working, talented wrestler to go to waste with a loss on such an important show.


Gargano rolled back out at that point, telling the EVOLVE champion that he'd been in the WWN for a lot longer than eight months and that he'd slogged to make the brand mean something. Galloway told Gargano that he was hungrier because he hadn't had the opportunity to do what he loved while in WWE and told the Gargano to leave the ring. They had a spirited verbal back-and-forth before things got physical and Ethan Page and Rich Swann left the locker room to break things up. All EVOLVE shows end with a promo of some description but this was one of the better ones. They did a great job of establishing the importance of the Mercury Rising unification bout. Definitely one to look forward to.


EVOLVE 39 was both a good show in its own right and a strong start to several days of wrestling from the WWN. There wasn't a single bad match all night and the final three offerings are all definitely recommended watches. Wrestle Week is off to a strong start!