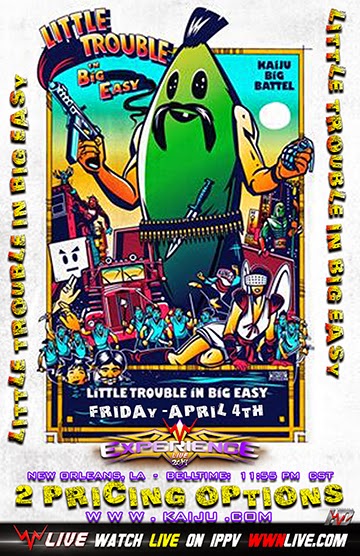 Wrestling is a varied art form. The word can be used to refer to a number of different things that, once you’re familiar with the basics of the sport, are quite different. It can just as easily be used to refer to WWE’s sports entertainment approach as Japan’s puroresu, CHIKARA’s comic book inspired action, Britain’s rounds-based technical mat wrestling, the southern-US approach of rasslin’, ROH’s serious athleticism, and TNA’s directionless nonsense. All can accurately be described as professional wrestling but they all have their different, some more pronounced than others.


Out on the very fringes of the term sits Kaiju Big Battel. This is where wrestling meets Japanese monster movies, a combination so niche that no mainstream promotion would ever touch it and so specific that smaller companies would avoid it even as a one off. Because how would you even incorporate it as a one off? It’s a pairing that has to be embraced in order to work, and Kaiju Big Battel have done just that.


Some aspects of wrestling logic don’t apply to Kaiju Big Battel. The ring is presented as a cityscape which the competing kaiju use as a battleground. Traditional wrestling moves and holds are used sporadically. And, most notably, everyone competes as a kaiju character, most of whom are linked to one loose faction (heroes, rogues, or Dr Cube’s Posse) wearing a specially designed outfit. Suspension of disbelief is more required than usual and the promotion’s own logic has to be fully embraced. But it’s still unmistakably wrestling. There’s a ring and the base logic of a good guy facing a bad guy. It’s just that here the good guy might be a cardboard box robot and the bad guy a walking mushroom.


I thought I’d cover Kaiju Big Battel’s WrestleMania weekend offering, Little Trouble in Big Easy. Doing so wasn’t easy. It was on at five in the morning by British time and didn’t get uploaded for a couple of days. These things were easy to overlook but added to the overall frustration I experienced when watching the show and having to struggle with the shoddy audio system. There’s no commentary and the show was held at the same venue as the weekend’s Dragon Gate USA shows. High production quality is not a concern for me, but when it actively detracts from a show I’m watching it’s natural for my enjoyment to be impacted.


I bring this up to explain why there are some missing names below, to cover myself in case any names that are given are written incorrectly. That’s something else to be expected when you can’t make out rings introductions.


The stream kicked off with Louden Noxious (who bears an uncanny resemblance to CHIKARA's Gavin Loudspeaker…) already at ringside high fiving fans and screaming unintelligibly into a microphone. He continued his screeching, which the crowd loved, as he dashed around the arena, clambered over chairs, and ran into the crowd below the stage before ending up in the ring. Once he'd made it there he promised us an evening of danger and mentioned the iPPV broadcast. He's a very good hype man, even if you can’t make out most of what he says.


After nearly six minutes of hype, during which he revealed that lead baddie Dr Cube was the new judge of New Orleans, Noxious introduced The Gambling Bug (it bites people and they become addicted to gambling). It had a bag allegedly containing ¥5,000 with it, prompting an amusing "Yen!" chant. Referee Bryce Remsburg was brought out next. He got a loud babyface reaction from the crowd. But as loud as he was it paled in comparison to what Paco and Pedro, the Plantains, heard. They are seemingly beloved by those who pay attention to Kaiju Big Battel on a regular basis.


The battle (battel?) started with the Plantains trying to body slam The Bug. Neither could manage it so they took a breather, which allowed the heel kaiju to attack them from behind and chuck them onto a bunch of buildings. The Plantains came back with some right hands and a double hip toss... which won them the money. Paco danced in the ring to celebrate and got smacked in the back of the head with a building by The Gambling Bug. He was then carried backstage.


The first combatant introduced for the second battle was Yarsminko, who came to the ring swigging from a six pack of beer and carrying a bag of rubbish. His opponent was Slo Feng, a Viking kitted out in blue and yellow and carrying what seemed to be Mjolnir. He used that to immediately destroy a building when the match began, although he was aiming for his unkempt foe. Slo Feng then got scoop slammed, covered in salt (or maybe sugar) and licked by his foe. Slo Feng was knocked around for a bit, making a comeback when he narrowly avoided a back splash off the top rope. Yarsminko tried lifting the hammer but couldn't manage it. The attempt was enough to allow Slo Feng to nail him from behind and then easily snatch up the hammer to use himself. Yarsminko was understandably unable to kick out of that. Slo Feng protected New Orleans like a champ.


After the match Noxious led a "You lost!" chant designed to drive Yarsminko backstage. It worked. He ran backstage crying.


Teddy Hart made a special appearance after that. After flashing his six pack he took a seat in the audience to watch the third battle. He wouldn’t be shown again and didn’t have his cat with him, disappointingly. That saw the super popular Kung-Fu Chicken Noodle take on Tucor and Sekhmet. Tucor is a slender brown kaiju with a beak and Craw has a giant right hand and a metal jaw. Hey are two of Dr Cube’s lead henchmen. Kung-Fu Chicken Noodle is, as you can probably guess, a tin of chicken noodles with arms and legs. Natch.


After the match The Grudyin joined his Posse teammates in the ring. Unimpressed with their loss The Grudyin knocked their heads together. Sun Buster, a green clad hero with a NES controller for a forearm, was introduced as his opponent. Craw and Tucor tripped Remsburg and then involved themselves in the match, triple teaming the good guy.


Thankfully The Awful Waffle was in the building and was unwilling to let such injustice pass. He took justice into his own hands, sending the misbehaving Craw and Tucor packing and resuscitating Remsburg. With the playing field level once more Sun Blaster made a comeback, begun by pinching The Grudyin's prominent nipples, and then leg dropped a building across his opponent's head for the win.


After that Louden Noxious said that there was no number one contender for the Grand championship and issued a challenge to anyone in the audience to participate in a number one contenders match. By pure coincidence the audience included kaiju hero Dusto Bunny. He was selected for the match by Noxious and was pitted against a kaiju with an American footballer feel to it. For the record Dusto Bunny's face reminded me of the Master's in The Deadly Assassin. That's Doctor Who stuff if you're wondering. The heel kaiju won with a low blow (right in front of the referee so presumably it's legal). Noxious got the audience booing but the monster didn't care: he played up to it knowing he had a Grand championship match coming his way. The fiend!


Next The Gambling Bug returned with Paco tied up and held hostage. Pedro was then introduced with the bag of yen he’d won fair and square earlier in the evening. It wasn't entirely clear but it seemed as though the decision of the earlier match was under investigation. Dr Cube was introduced as a judge alongside his minions and Tucor. Cube ran through the case but the poor microphone made it impossible to hear most of what he said (in fairness the fact that he had a box on his head didn’t help). I did understand him sentencing The Gambling Bug to death though. Which seemed… excessive.


Cube's Posse beat the monster down and carried it backstage. Tucor and the number one contender then turned Pedro and ejected Remsburg from the ring. The beating finished with Tucor leaping off the top rope to splash the Plantain through a pile of buildings. Seconds afterwards American Beetle rocked up and untied Paco, allowing the yellow ones to take out all members of the Posse, and Dr Cube himself, to send the crowd home happy.


Kaiju Big Battel is not going to be for everyone. I imagine many wrestling fans will find it jarring. I certainly wouldn’t be interested in watching it more than a few times a year. But it’s a refreshing break from wrestling’s usual tropes and a chance to watch the sport through a different creative prism. Watched sporadically I think most wrestling fans with a sense of fun can enjoy Kaiju Big Battel’s product. And a large number of non-fans probably can too.
Posted by Dave at 16:37